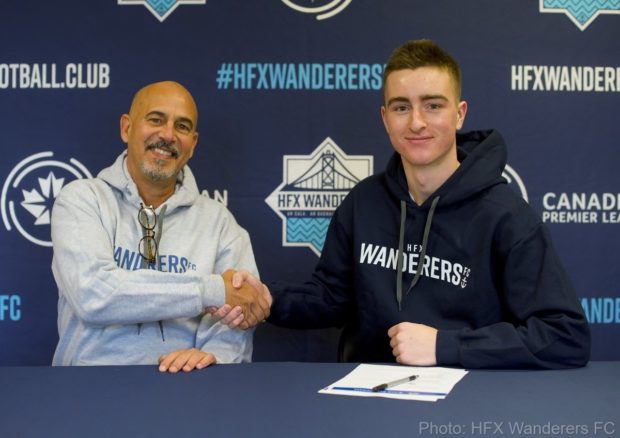 “I didn’t feel any added pressure being the youngest player” says Scott Firth, the 17-year-old midfielder who found himself in last July’s Atlantic XI starting lineup. “I saw it as my opportunity to prove myself and I am happy that Coach Hart had faith in my abilities”

And prove himself he did.

There’s a certain level of internal fortitude required to avoid crumpling under the weight of an occasion as big as last summer’s friendly at the Wanderers Grounds. To be only four months into your 17th year and playing alongside men, is hard enough. To have the man tasked with assembling the first ever professional football team in Halifax watching, analyzing, and scrutinizing your performance, is harder still. And to do all of this under the gaze of 4,000+ friends, family and strangers is the cherry on top of this proverbial cake. If this is a cake made of anxiety-inducing, shit-your-pants pressure, that is.

Perhaps the ability to handle this pressure is what convinced Stephen Hart to sign Firth to his first professional contract last month (he is also the first Nova Scotian to be signed by any team in the league). It’s quite the achievement for someone who spent the morning prior to Wednesday’s announcement taking a high-school exam.

“The reaction has been very positive,” he says of his classmates he sat alongside during that exam. “They all think I earned it with all my hard work throughout the years.” It’s that hard work that has led to this well-earned reward.

As a youth player, Fall River-native Firth has experienced most of what Nova Scotian football has to offer. Having a background in the local game allows him to recognize the importance of the Canadian Premier League for future youth players in the province.

“This league presents a goal that is very possible to reach and so close to home,” he says. “I think kids will dream to be a part of the league and will put in the hard work to achieve it someday.”

The question of whether a province as small as Nova Scotia, with a population of only 950,000, can produce high-level footballers is not one that worries him. “There is definitely a lot of talent in Nova Scotia but it’s just the ability to uncover it and to really give us Nova Scotians a chance to perform and show our ability”. He played alongside some of this talent at the 2017 Canada Games, where a now-familiar theme occurred: much like July’s Atlantic XI game, he was selected as an underage player.

As a holding midfielder, Firth’s role on the pitch is akin to a conductor’s role in an orchestra. It’s a position concerned with matters such as rhythm, tempo and control. It’s a role he grew into after watching Barcelona’s Sergio Busquets as a youngster, a player he admires for being “so calm on the ball” and who can “pick out the right pass for each situation”. These are qualities reflected in his own game, particularly Busquets’ ball-retention statistics. “I strive to maintain a high pass completion rate which is really important in my part of the field,” Firth says.

It’s an interesting mindset for a 17-year-old to have. Most teenagers tend to favour the more in-your-face extremes of football, such as goals, saves, and crunching tackles, over this slightly quieter attribute. For Firth, his objective on the field is different. “I try to analyze the game and realize when the team needs to slow down and keep possession, and also when it is time to pick up the pace and attack.”

Perhaps some of this mentality comes from his time spent abroad. In 2015 and 2016, Firth had trials with Portuguese giants Sporting CP and Benfica. It is an experience that shaped him and opened his eyes to the levels required to be a professional. It’s also one he hopes will benefit him in the coming season.

“At all of those trials, I noticed the fast pace the game was being played at,” he explained. “This excites me for the league this year because I know the game is going to be played at a fast pace. I’m ready for the challenge”.

The next professional team to notice Firth’s potential was Toronto FC. He spent February and August last year training with TFC U20 and getting the sort of national recognition those who had worked with him the past knew he deserved. For Firth personally, it was also confirmation of his ability. After all, being the standout performer in his province was one thing, but being invited to train alongside the country’s best, is another.

“Getting the initial tryout opportunity with the TFC3 team and then a follow-up opportunity was an accomplishment,” he feels. “It showed that I have qualities that professional teams are interested in.”

The interest of Stephen Hart was further evidence of this, and after impressing in last July’s training camp and match, Firth become HFX Wanderers’ latest, and youngest, signing to date.

What happens with Scott Firth next is one the more intriguing subplots of this fledgling HFX Wanderers team. The fans will take to him, not only because of his abilities as a player, but also because they’ll get to live vicariously through him on the field. He is, after all, the rarest of things: a Nova Scotian boy playing professional football for a Nova Scotian team. If youth football was a computer game, he just completed it.

How then, does he see the following year panning out?

“I see myself fighting for a starting place even though I will be among the youngest in the league,” he says. “I’m going to give it my all and leave it all on the field.”

Of this, Stephen Hart will have no doubts.