The draws were made this morning in Victoria for the 2013 British Columbia Provincial Cup competitions and AFTN will once again bring you comprehensive coverage of this year’s men’s tournaments from the first round through to the final.

Over 90 teams from ten different leagues will contest this year’s competitions with the Provincial Cup Finals day hosted by the Vancouver Island Soccer League (VISL) and Lower Island Women’s Soccer Association on May 11th, with all games taking place at Bear Mountain Stadium in Victoria.

Teams qualify for the Provincial Cup in a variety of ways. Some make it through by winning their league, others by winning their respective year end League Cup and some by where they finish in their league standings. The number of berths each league is awarded in each competition is determined on a yearly basis by the Adult Competitions Committee.

If you haven’t taken in any of the games before, then change that this year. Not only will you be impressed by the quality of football on display, you can’t beat a knock out cup competition for excitement and it’s great to have a tournament with such a rich history right here in BC. It really is the jewel in BC Soccer’s crown.

“The Provincial Cup competition showcases the best the province has to offer in adult soccer as it brings together the top teams from all major leagues in British Columbia, ranging from U21 to Over 35’s, and which feature many former professional and national team players to the top amateurs. It has often been stated that it is tougher to win the BC Adult Provincial championships than to win a medal at the Canadian Club Championships,” said Kjeld Brodsgaard, First VP BC Soccer and Chair of the Adult Competitions Committee.

The U21 Doug Day Cup was won by Port Moody Gunners last year and they are back in this year’s competition, kicking off at home to Richmond TSS Olympics in the first round.

In the draw for the Deryl Hughes Masters Cup, last year’s winners Westside FC are drawn away to Powell River Villa, as they look to record back to back wins and head back to the Western Championships. North Delta SC Rangers have been drawn at home to Surrey FC Temple United in the first round.

NVFC Campobasso won promotion last season so won’t be back to defend their Keith Millar ‘B’ Cup crown. VMSL ‘B’ Cup winners, Ajyal Tigers, will be one of the favourites to lift the trophy come May. The all-Richmond clash between Richmond Athletics and Richmond All Blacks looks like it will be a bit tasty, with only a point separating the top two RSSL teams over the season. 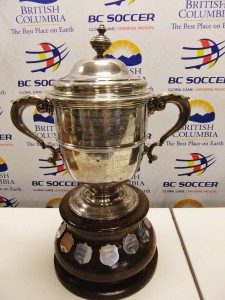 Pride of place goes to the Men’s ‘A’ Cup. Sixteen teams will battle it out to lift the 90 year old trophy, and a place at the nationals in Halifax, Nova Scotia in October, but the competition itself has a long and proud history going back 122 years.

The draw has thrown up some potentially great games.

Last year’s winners, Surrey United Firefighters, have a tricky first round tie as they look to defend their trophy, with a trip to the island to face VISL Division 1 champs Saanich Fusion.

Match of the round could be VMSL Premier champs Columbus FC at home to FVSL Pakenham Cup winners Abbotsford Magnuson Ford United. VMSL Imperial Cup winners Delta United Hurricanes at home to West Van FC is bound to be another cracker.

The full first round draw is as follows:

The first round matches in all the competitions are due to be played over the weekend of April 12th, 13th and 14th. Try and get along to some of the games if you can. You won’t be disappointed.

[You can catch up with all of our coverage of the 2012 Provincial Cup HERE, with reports, photos and videos of matches from the first round through to Finals day in Burnaby]
Tags: draw, BC SOCCER, Provincial Cup, VMSL, FVSL, VISL, PCSL, RSSA, BMSA