Another year is over. You know what that means. It’s time for AFTN’s 11th annual end of season awards, as we look back at Vancouver Whitecaps’ 2021 season and some more aspects from the North American footballing landscape.

For the first time since 2017, the Whitecaps were a playoff team. A good achievement in itself, but made even greater with the team having played every game down in the US until the start of August. Sadly it was one and done but for a team that was languishing bottom of the Western Conference standings at the start of August, it was a remarkable achievement.

There were highs – a 6th placed finish in the West, that first playoff appearance since 2017, a new coach that’s breathed new life into the club and excited the fanbase, and we finally have a number 10. There’s a lot to be excited about.

But there were also lows – having to change manager, playing half the season away from Canada, that Canadian Championship loss to Pacific, and the investigation into historic misconduct allegations in the Whitecaps women’s program.

But a lot to build upon heading into 2022, and we round-up this past season in all of its ways in our annual awards. Don’t agree with some (or all) of our choices? Great! Let us know who would have got your votes in the comments below.

Here’s our first eight awards and you can also catch up with our choices from previous years in the links below:

AFTN WHITECAPS PLAYER OF THE SEASON :

WINNER: MAXIME CREPEAU – So Max has technically won this award three seasons on the trot now, and deservedly so. It’s pretty fair to say that without Crepeau’s performances this season, the Whitecaps would not have been a playoff team. Despite splitting his time between club and country, Max kept six clean sheets in 27 MLS appearances over the regular season, giving up just 1.15 goals per game, making 97 saves, and having a 75.8% save percentage. His penalty save against Dallas and his last ditch smother against Seattle were big parts of the team heading into the postseason. 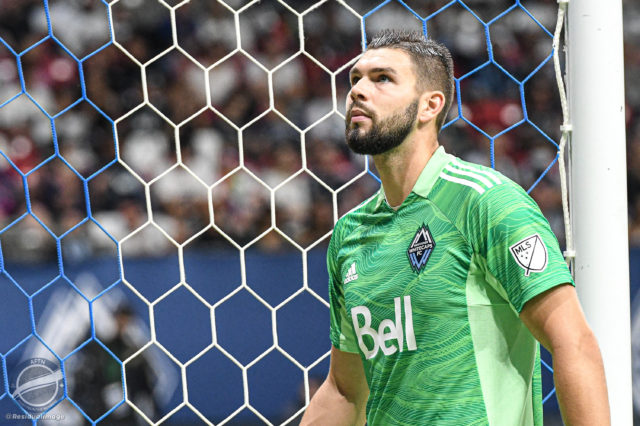 White came to the Whitecaps at the start of June for $400,000 in GAM and a further $100,000 in conditional GAM. That latter part will now surely be met after a season that saw him start slowly with the ‘Caps before exploding. Well he scored on his debut against Real Salt Lake in a 3-1 loss but had no goals in his next 10 games. Then bam, and he finished with 12 goals and 5 assists in 27 MLS apps.

White’s goal played a huge part in the Whitecaps’ success and he was on fire once the team finally added their much coveted number 10 in Gauld. The Scot hit four goals and added six assists in 18 regular season appearances, just 13 of them starts. His addition was exciting and left you wondering what could have been if only the ‘Caps had been able to get him here sooner.

WINNER: DEIBER CAICEDO – The 21-year-old Colombian had a fantastic first season in MLS and is such an exciting prospect for what he could mean to this team as he develops and hopefully takes that next step. He featured in all but one of the regular season matches, making 24 starts, scoring five goals and leading the team with seven assists. His 28 key passes were third on the team. The problem the Whitecaps now have with Caicedo is how to get him fully integrated in Sartini’s system. 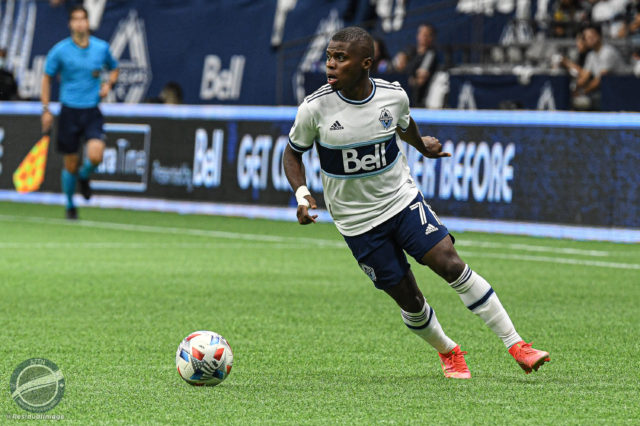 WINNER: EMILIANO BRIENZA – 2021 was a season of ‘what ifs’ for Emiliano Brienza. The 19-year-old midfielder was one of the handful of highly thought of academy players that Marc Dos Santos included in the Whitecaps preseason plans this year, but while some others earned MLS homegrown deals, an injury set Brienza back a bit and he had to rebuild in the ‘Caps development squad in a series of friendlies, under the tutelage of Vanni Sartini.

The new ‘Caps MLS head coach knows just what Brienza can do and watched him hit a first half hat-trick in a summer pre-season friendly against FC Tigers at Burnaby Lake (you can see the goals HERE) and looked hungry, sharp, and ready to be tested at a higher level. After a season of no real competitive development with the U23s, he’ll now get the chance to show just what he can do in the the MLS Next Pro league in 2022. If he hits the heights expected of him, a MLS Homegrown deal could soon follow. 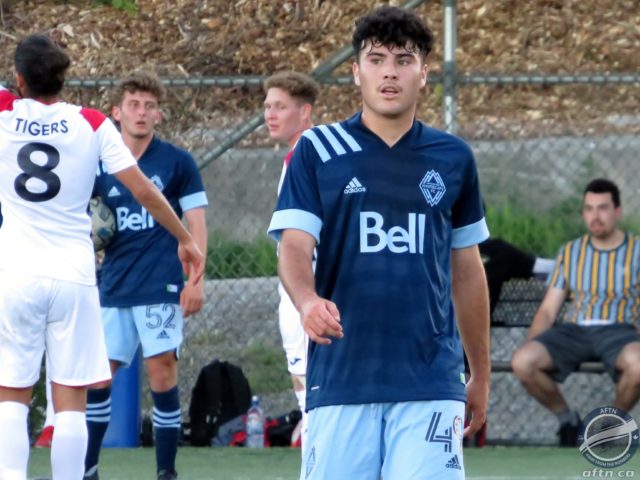 WHITECAPS GOAL OF THE SEASON :

WINNER: CRISTIAN DAJOME (v LA GALAXY – 17/07/21) – What do you look for in a goal of the season? A Golazo or a well crafted team goal? I’ve always liked the latter or something that’s a bit different, although obviously some thunderbolts simply can’t be ignored.

There may have been more spectacular goals scored over the course of the season by the Whitecaps but for me Cristian Dajome’s winner in Vancouver 2-1 victory over LA Galaxy in Utah in July was the one for me this year. After Deiber Caicedo powered forward, his Colombian countryman Dajome gets the ball in the box, looks up, sees three defenders around him then plays a short pass to his left to Brian White. That pass draws all three forwards to White, who in turn quickly plays it back to a wide open Dajome, who fires home, giving Vancouver the three points and starting a 10 match unbeaten run in the league.

WHITECAPS GAME OF THE SEASON:

WINNER: 3-2 WIN AT PORTLAND (20/10/21)
– What a game. What a comeback. What a derby day victory! Two goals down at half time to goals from Yimmi Chara and Dairon Asprilla. The Whitecaps looked dead and buried. But then came the second half fightback. Deiber Caicedo pulled one back in 63rd minute and then Brian White tied it up in 76th. But the drama wasn’t over and Cristian Dajome scored the winner from the spot in 82nd minute. It was a much needed three points to keep the playoff push alive and the only sad thing about this whole Cascadia derby win was that Vancouver fans couldn’t be there in numbers to see it. This win epitomised the fighting, never say die spirit that Vanni Sartini had instilled in his team and it was a joy to watch.

WHITECAPS SAVE OF THE YEAR :

WINNER: MAXIME CREPEAU v FC DALLAS (25/09/21 – stoppage time penalty save in 1-0 win) – Now there was debate amongst the AFTN Soccer Show crew on this award. I personally wanted to go for Max’s double save off Ricardo Pepi in the Whitecaps’ 2-2 draw in Dallas on July 4th. For me it’s the better save and I do like a doubler or a tripler. But we’ve ended up going for the majority vote and it is in fact another save by Max against Dallas. And this one was absolutely massive.

September 25th was the date. BC Place the venue. The Whitecaps are 1-0 up through a first half Brian White goal and with the game deep into second half stoppage time, a crucial three points looked secured. But then from nowhere Dallas win a late penalty for handball. Franco Jara steps up, but Crepeau pulls off an incredible stop. The rebound is cleared and while everyone goes to congratulate Max, Dallas still have a throw in and the panic is back on. The Whitecaps see the game out and without those three points, the team would not have been playoff bounce. Massive doesn’t even do this one justice.

The @WhitecapsFC ’keeper saves all three points for the home side. 🧤 pic.twitter.com/PdGooDJLvB

WINNER: PEDRO VITE – I had two players down for this award and was deciding between the eventual winner Pedro Vite and Javain Brown.

The latter impressed so much this past season, and was also my runner-up for the Young Player of the Year award. You never know what to expect from draft picks, and he already looks like one of the steals of this year’s draft, going 23rd overall but becoming a first team regular fairly quickly making 25 appearances and clocking 1731 minutes in 2021. He contributed five assists as well and is versatile in both full back/wingback positions and in the centre of the defence.

The only reason he didn’t get the nod here is because we’ve already seen him and know what a talent he is. Pedro Vite on the other hand is an enigma! The 19-year-old Ecuadorian attacking midfielder was signed in August through the MLS U22 initiative but visa and Covid delays meant he never set foot on the pitch as a Whitecap in 2021. He comes highly touted and though he is more likely to play a sub role next year, I’m just excited to watch what we have in him. Will he settle quickly? Will he live up to expectations? Will he take some of the creative pressure off Ryan Gauld? A lot to watch out for.

BEST PERFORMANCE BY A WHITECAP AT INTERNATIONAL LEVEL:

WINNER: MAXIME CREPEAU (Canada) – It’s been quite the year for Maxime Crepeau at both club and international level. His exploits with the Whitecaps have been well documented above, but he split a lot of his time this year away with Canada in World Cup qualifiers and at the Gold Cup. Max was a key part of the team’s success in 2021, playing in nine matches throughout the year, including all five games at this summer’s Gold Cup. He kept three clean sheets and only allowed seven goals, cementing himself as the man in waiting to take over from Milan Borjan as Canada’s number one.

His passion shone through, as did his not putting up with any of that CONCACAF shit attitude from opposition players. Oh, and then there was also that penalty save against Mexico. He’s been a rock for Canada and his international future looks very bright indeed. 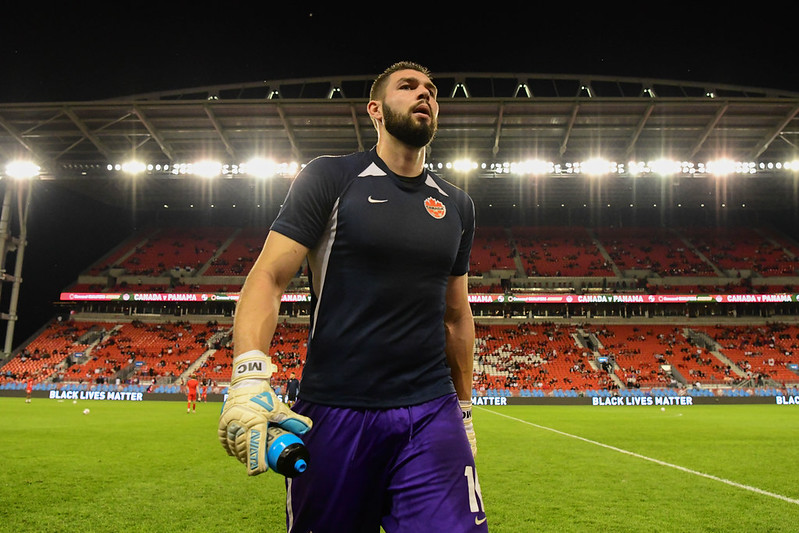 And so concludes our first awards from the 2021 season. We’ll be back soon with Part Two which features Quote of the Year, our Heroes and Villains, Most Embarrassing Moment, Disgrace of the Year, and more.