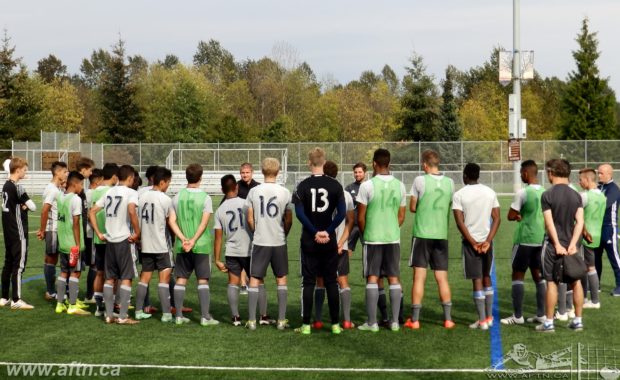 It’s only been seven weeks since Vancouver Whitecaps U18 side lost an agonising USSDA Championship game 2-1 in extra time to FC Dallas.

It was a heartbreaking end to a fantastic season that saw the ‘Caps win another Northwest Division title and reach their second national championship game in five years.

But of course, as nice as results and trophies are, it all boils down to development, and the ‘Caps produced another successful alumni group, with several players having earned USL contracts and several more heading off to the college ranks in the US.

“Yeah it was [heartbreaking],” Whitecaps U18 head coach Rich Fagan admitted to AFTN this week. “But lots of silver linings. We’ve had players that have pushed on, and they played with USL that weekend, as well as guys that have been around them a ton since they signed with them.

“Okay, we don’t win the Championship but we’ve pushed players on and those guys are contributing, so there’s positives to draw from it for sure.”

There’s not been too much time to dwell on last season, with the Whitecaps Residency teams returning to preseason training this past month as they get set to kick off their 2016/17 USSDA campaign with a two game road trip this weekend, heading to take on Sacramento Republic on Saturday and Real Salt Lake AZ on Monday.

Not even two months have passed from that championship game till the new season gets underway but so much has changed on the Whitecaps rosters in that short period of time. And it’s been all change on the U18 squad in particular.

Only three players remain from last season’s roster – goalkeeper Aidan Aylward, midfielder Patrick Metcalfe, and forward Gloire Amanda. They’ll all be key players again this season, and they’ll be joined by 15 players moving up from the U16 side.

It might seem a staggering amount of change to a team, but a number of the guys were already part of the U18 team over the course of last season and are only officially moving up now.

But there’s also a huge element of continuity to it all. This is a core group of players who move up from a highly successful U16 side and who have played together, and been part of the Whitecaps Residency program, for a number of years now, some of them dating back to pre-Residency teams.

“It’s definitely a strong core of players from last year’s 16s,” Fagan told us. “They were together in the 14s and then even in the Prospects program. There’s definitely a lot of familiarity in the group and to be quite honest, these guys are best friends a lot of them, so it will definitely help them.”

While development is always the number one priority for the club and the coaching staff, advancing players through the Whitecaps system from Residency to first team, you can’t tell players not to look at results on the pitch, especially young players.

Having tasted their own playoff success and agony over the last couple of years, this is going to be a group eager for more, keen to hit the ground running, and make an immediate impact with the long term playoff goal firmly in their minds once again.

“We want to play as many meaningful games as possible,” Fagan said. “So what that means is that we have to do as well as we can to get into the playoffs, then obviously we have to perform well at the playoffs, and then hopefully we go one step further.

“Having got to the final last year, okay we’ve only got the three boys we’ve retained from last year’s group, but the other guys watched it. There was some 99s that we brought into that team and that were a part of it. They contributed in the semi-finals and were part of the finals. So they have a little taste as to what that was all about and they’ll want it too.”

Joining the familiar faces in the Whitecaps U18 squad this season will be four players new to the Residency program, with three of them heading west from the Whitecaps academy centres across the country. 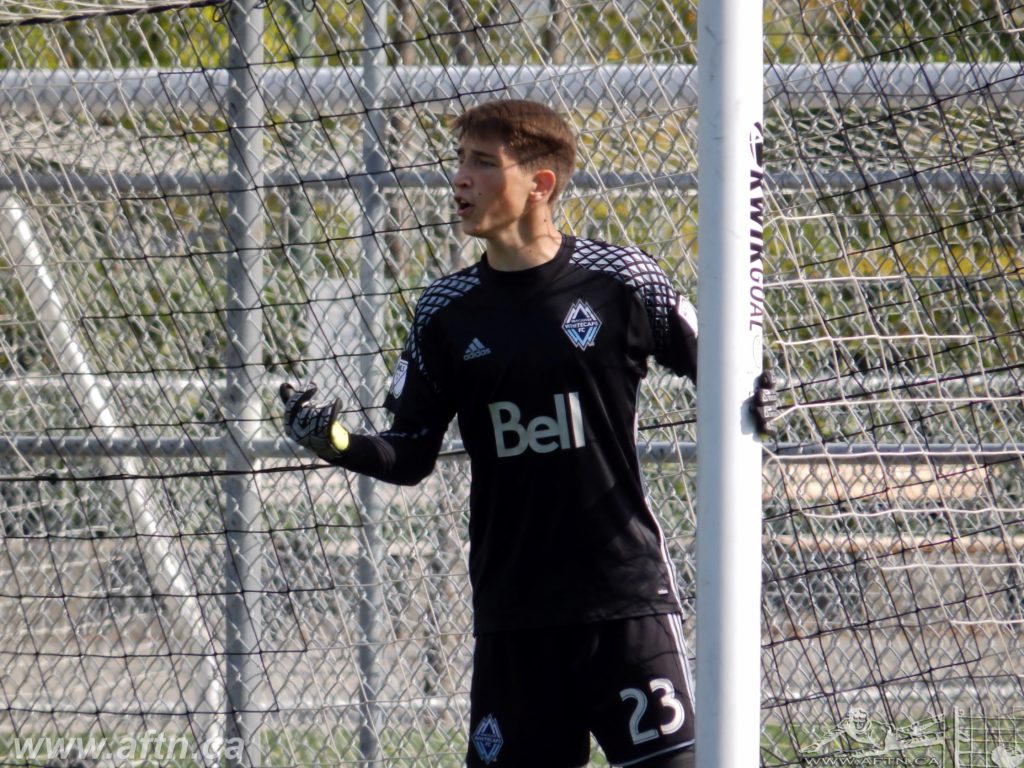 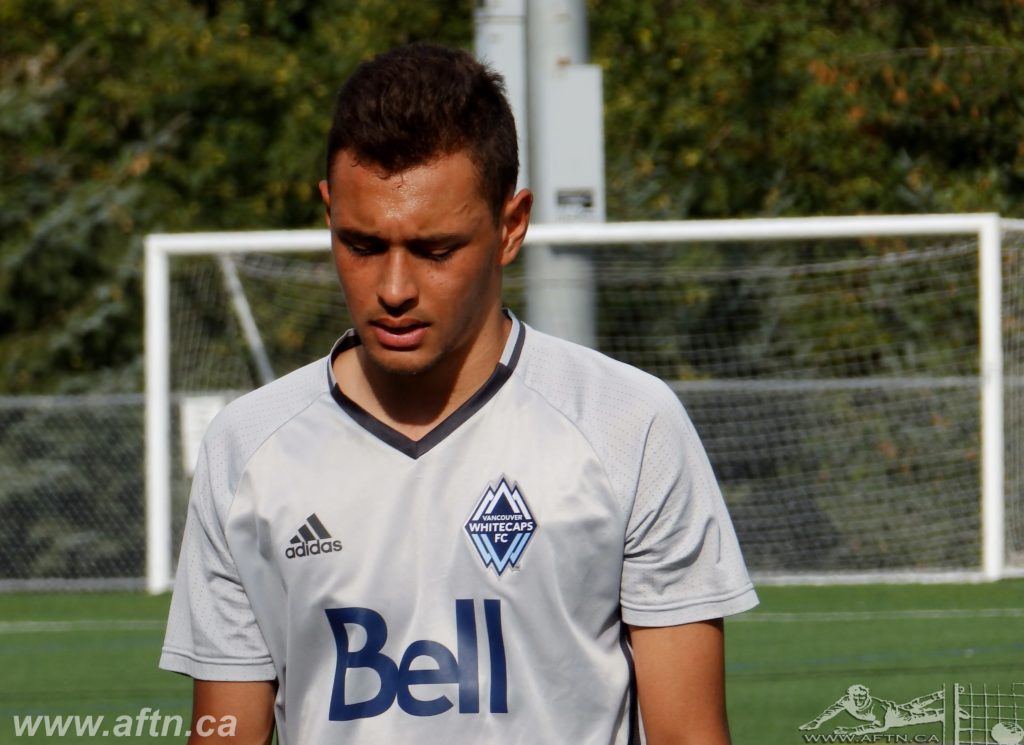 All are highly thought of in the Whitecaps system and have already impressed their new coach.

“I think it was always going to take a while to establish those centres, but that’s a big part as to why they’re there,” Fagan said. “The guys that we have brought in from them, they’ve been great in preseason, and I think they’re going to be good players for us this season.”

Gopaul is a 17-year-old winger, touted for his speed, skill and high work rate, and was part of the London team that lifted the Whitecaps first provincial trophy in February, the U18 Ontario Indoor Cup.

Hasal turned 17 in July and will be hoping to follow in the footsteps of his fellow Saskatchewan native Brett Levis in his success with the ‘Caps. Described as a commanding and vocal goalkeeper, he’d had a couple of trials with the Whitecaps before eventually getting the nod to head west for Residency.

Glennon, the third member of the Academy centre trio to join the Residency for this season, is another player who has past history with the Whitecaps. The Vernon, BC resident joined the program a couple of years ago as a 14-year-old, but decided to move back to the Okanagan to be with his family and friends. 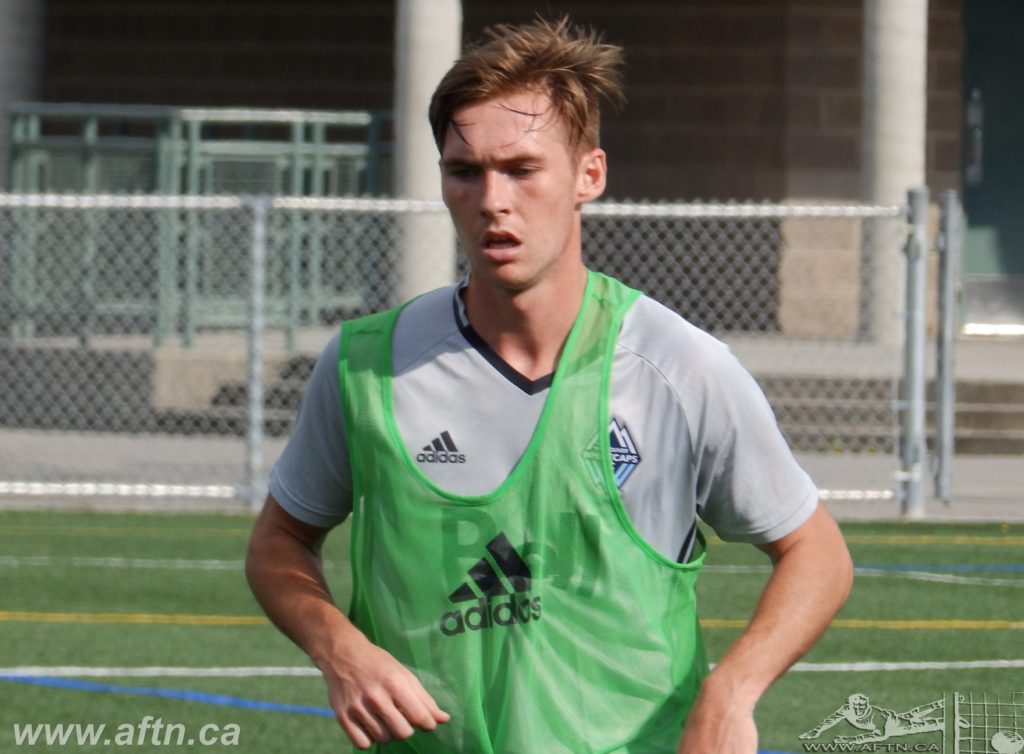 Given a second bite of the cherry, Glennon’s family have upped sticks and moved to Vancouver with him this time around and the midfielder is keen to make the most of his new opportunity. He already looks to be one to watch, impressing in the U18 intrasquad game at Residency training on Tuesday with his footwork and moves.

“He’s a hard worker, and to be honest, we don’t really have an abundance of natural wide players,” Fagan told us. “That’s where I see him playing. His work ethic and his first touch [are good], and technically he’s very sound. It’ll be a big part in how we want to play in terms of getting balls into the box. I think he’ll be a good player for us.”

The three Academy centre additions will also be joined by a more local lad, forward Victory Shumbusho, who comes to the Whitecaps from Chilliwack Attack. 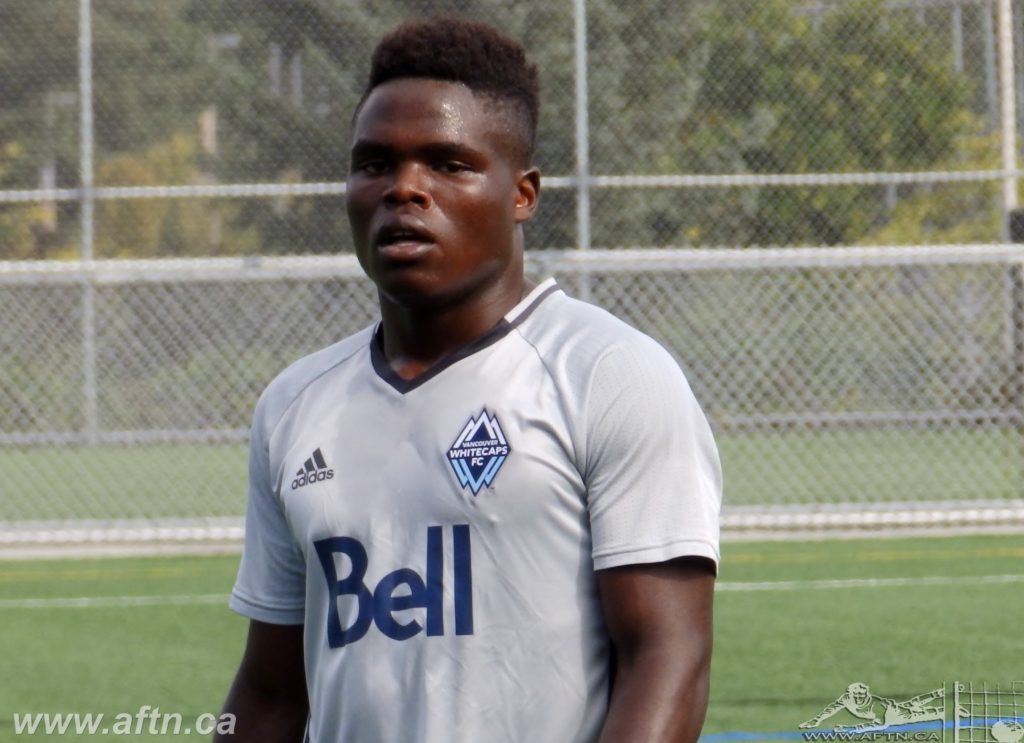 Shumbusho will join a very talented group of forwards in the U18 side this season, adding more firepower to an attack that includes the always-improving Gloire Amanda, the exciting Theo Bair, and the clinical finish of last season’s highest scorer in all of the USSDA, Alan Camacho.

With Carl Robinson favouring the 4-2-3-1 formation, it’s a system the Whitecaps try and play from top to bottom in the club, but with such a wealth of attacking talent at his disposal, Fagan does have a bit of flexibility to go with another system to ensure he’s getting the best out of his team.

“We’ve got an abundance of strikers. That hasn’t always been the case, so it’s going to be great to try and play with two forwards up front at times, but they can also play by themselves. We’ll probably go back and forth. We’ve gone back and forth in the preseason and I imagine we’ll continue to do that.”

Goals have never been too hard to come by for the Whitecaps Residency teams. The U18s hit 81 in their 31 matches last season. The U16s fired home 89. It’s certainly going to be interesting to watch how Amanda does with another year under his belt and how Camacho fares at the higher level. The ‘Caps are high on both players, so this could be an important year for them.

At the other end of the pitch, there are some really strong defensive players starting to shine.

Both ‘Caps Residency sides were fairly miserly last season, giving up less than a goal a game. With only Aylward remaining from a U18 backline that conceded only 24 goals last season, the U16 guys moving up will need to hit the ground running at the older level, but the signs are there that this shouldn’t be too much of a problem.

In that defence are a couple of centre backs who are starting to catch the eye and leaving us wondering what the future might hold in store for them – Brendan Skinner and Joel Harrison. 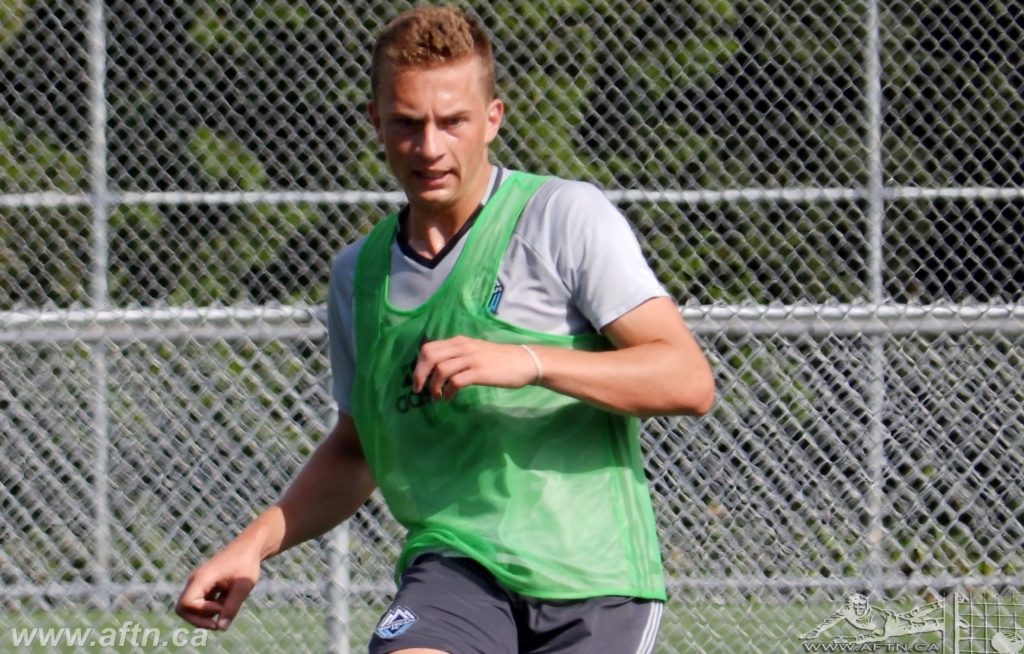 Skinner has been with the Whitecaps since 2012/13, after joining from Surrey United, and has really started to develop into a top quality defender, and has been called into some recent Canadian national team camps. He looks very assured at the back and is an excellent talker. He’s another that it’s going to be fun to watch move up to that higher age group and see where his development goes next.

“Brendon had a good season last year,” Fagan said. “He was introduced to the national team for the 99 age group. He’s got a massive frame and technically he’s sound. He’s a leader, he wants to be a leader, he’s a good communicator, which isn’t always the case in North America, so Brendan’s got as good a chance as anyone.”

The partnership he’ll continue to form with Joel Harrison at the back could be one of the key aspects of the U18 side’s defensive success this season. Both look like really good prospects, and Harrison has already caught the eye of USL coach Alan Koch, who called him up for two matches this summer, where he made two substitute appearances for WFC2. He’s most certainly one to watch even closer this coming season.

“He definitely is,” Fagan agreed. “What I love about Joel is it’s like he has ice in his veins. Regardless of the environment, whether it was last year coming into the 18s, or even getting the opportunity to go on USL trips, nothing fazes him. Which is great, and you want it for any player, but [especially] for a central defender. He reminds me a little bit of a Nemanja Vidić. I think Joel has a very good chance.” 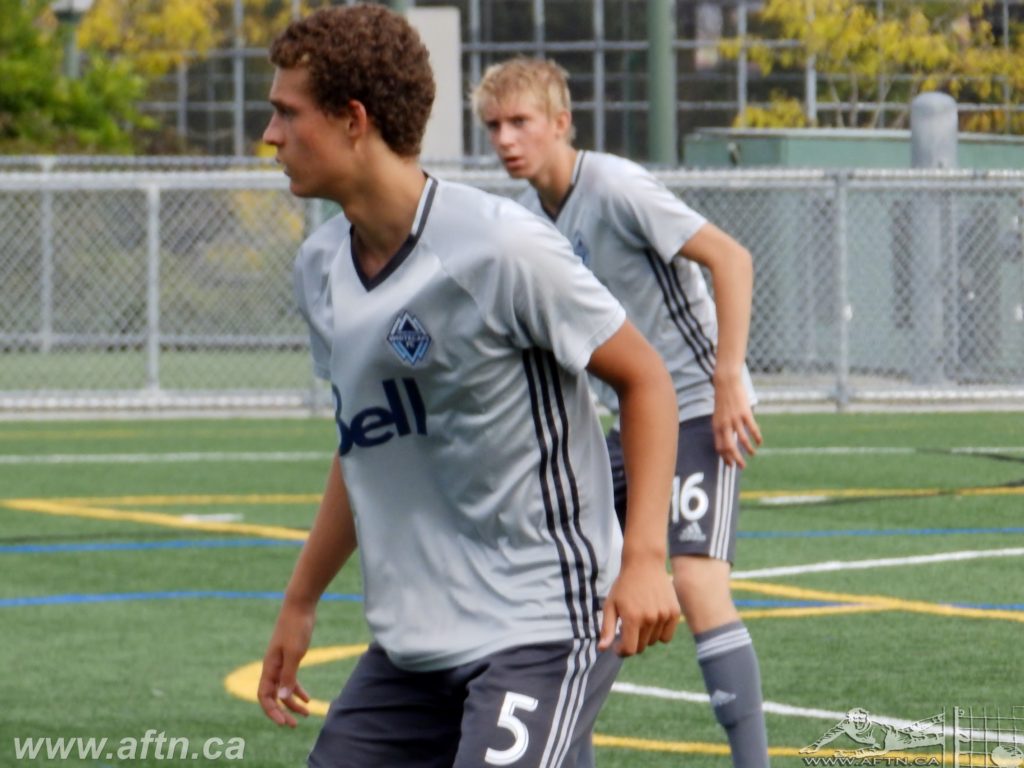 So another exciting group of U18 talent with the Residency for this coming season. You can find the full roster HERE if you want to find out some more about the guys, which you really should.

The ‘Caps kick off the new season with those two matches on the road this long weekend, but you can get your first chance to see them in action on home turf on September 24th and 25th when they take on San Diego Surf and then Nomads SC up at SFU.

As always, AFTN will continue to bring you the best coverage of the Residency all season long, so make sure you check back regularly, and if you can get out to see the guys in action, then please try to. It’s a talented team and you’ll most certainly see some of these guys with pro contracts in the years to come, with Michael Baldisimo looking particularly impressive and almost guaranteed a USL contract for next season.

Get out and see why and #SupportTheFuture.