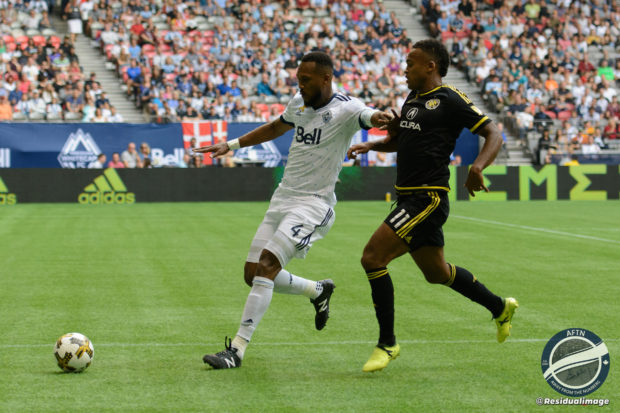 Not many will have heard of Norwegian striker Ola Kamara when Columbus Crew brought him to MLS in February of 2016. That certainly wasn’t to be the case by the end of the season, where he finished as the league’s fifth highest scorer, and the striker’s rich goalscoring form has continued this year.

Last weekend’s goal for the Crew, to tie things up at one apiece against Vancouver Whitecaps, was Kamara’s 16th of the season, matching the numbers he put up last year with four games remaining.

Impressive numbers to start off his career in North America, especially considering Kamara didn’t get his first start and goals for Crew SC until May last year, where he then hit eight goals in six matches and made the starting striker role his own.

He’s now scored in four straight games for Columbus, with seven goals in his last eight matches, and the 27-year-old feels there’s still a lot more to come.

Kamara is a joy to watch, with fantastic movement, and a real goal threat wherever he is in the box. He’s a handful for any defence in the league, but when people are asked to name their top strikers in the league, his name is often found missing.

The pitfalls of playing for an unfashionable club like Columbus perhaps, but for his coach, Gregg Berhalter, if Kamara isn’t getting the respect he deserves, then people simply aren’t paying attention.

“I think Ola’s an outstanding striker,” Berhalter told us after last weekend’s match. “I think if people watched our games they would see how good he is. Very good movement off the ball, very good finisher, very good work rate. In my eyes, he’s one of the top strikers in MLS, but I get to coach him. I think if people were watching enough they’d be able to see the same thing.” 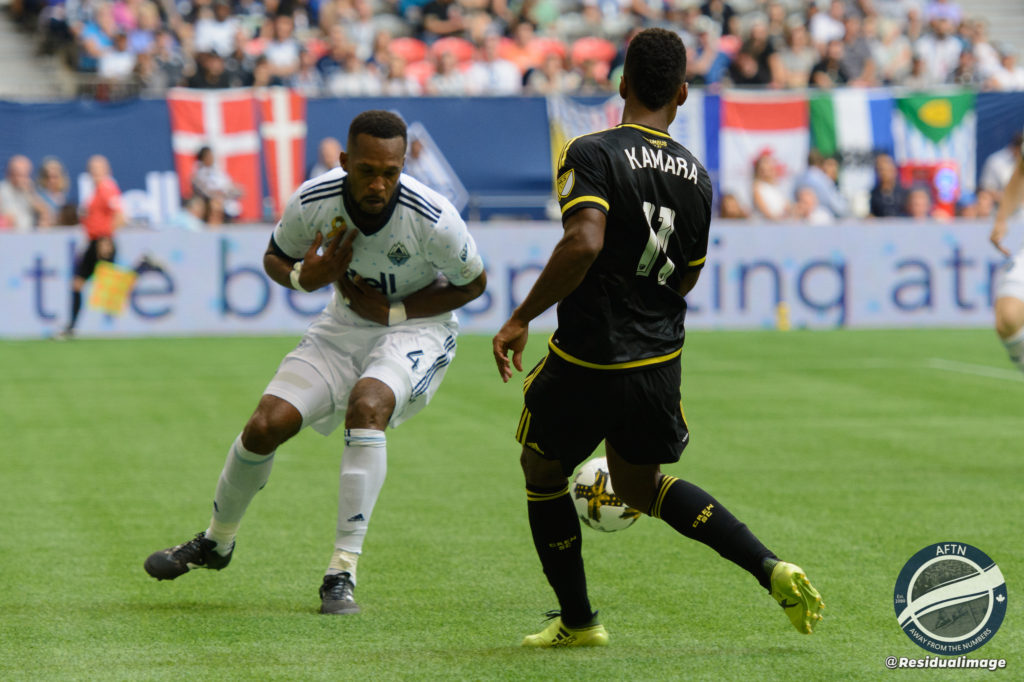 The majority of Kamara’s career had been spent with clubs in the Tippeligaen in his native Norway, starting his professional career as a 16-year-old with Stabæk before moving to Strømsgodset Toppfotball, via a loan deal with Hønefoss. It took Kamara 100 matches to hit 32 goals for Strømsgodset, a feat he matched in just 55 games in MLS.

A short spell in Germany with TSV 1860 München was followed by a move to Austria Wien for the end of the 2013/14 season. But with only two goals in 23 matches, Kamara found himself out on loan and back in Norway a year, this time with Molde.

It was with Molde that Kamara refound his goalscoring form, hitting 21 goals in 43 appearances in all competitions. Form that saw him end up on Columbus Crew’s Discovery list before pulling the trigger on him in the offseason of 2016.

So why MLS and why now for Kamara?

“The league looked very interesting,” Kamara told us. “I saw a lot of games that year when I decided. Also I think it’s a lot of good players here. It was a different road and I knew that when I wanted to move at that time when I did.

“I wanted to talk to the coach, secure my choice of course, and when I talked to Gregg I really felt good about it, so that was in my consideration. Watching how the league is, it fits me well and people can see that now, scoring 32 goals [so far] the last two years.”

There’s a long list of European players who have made the move to MLS and struggled. Both struggling to perform on the pitch and struggling to cope with the logistics of it when it comes to travel, pitches, and playing conditions.

We’ve had a few of them here in Vancouver, but Kamara seemed to fit in to his new surroundings with ease.

“We have a lot of turf in Norway, so that wasn’t a problem,” Kamara told us. “The pace is different. It’s more back and forth and it’s a lot of athleticism. It’s a bigger, faster, stronger league. The biggest difficulties for me were the heat and the humidity, because you never had that in Scandinavia. I mean that was hard.”

And what of the long flights and road trips?

“The travel has been okay,” Kamara continued. “When I played with Molde we travelled a lot because of the Europa League and the Champions League qualifiers and all those sort of things, so I was used to that. I don’t think that is bad. People should come over because they will actually enjoy this league and they will actually be surprised if they get over.” 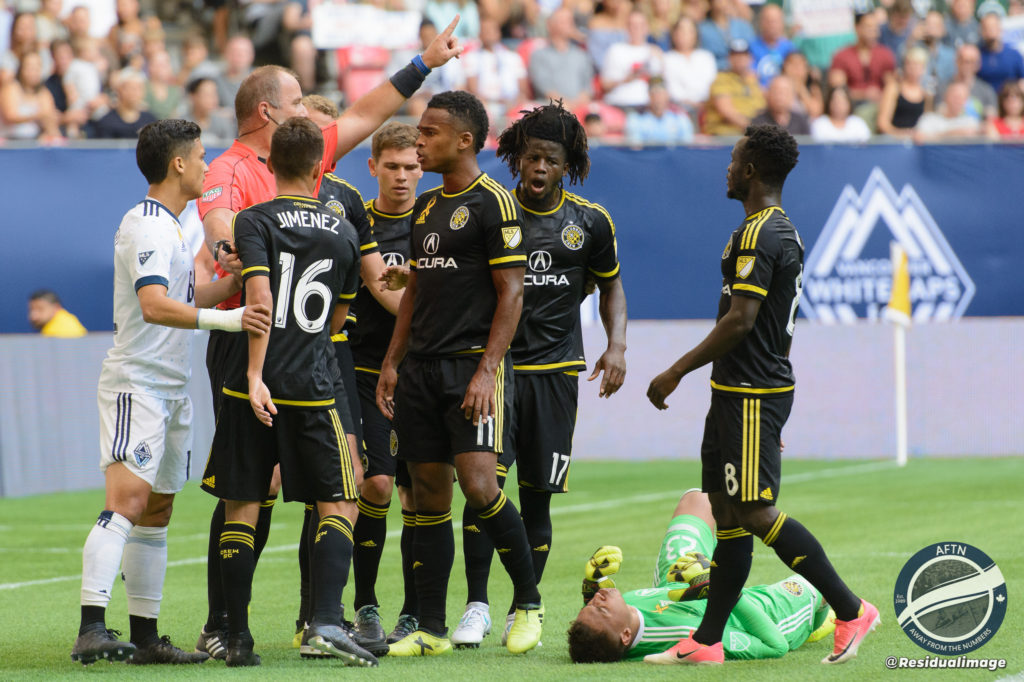 It’s been a different story this year. Columbus currently sit in fifth place in the Eastern Conference standings on 44 points from their 30 games played so far. While that sees them a whopping 18 points behind runaway leaders Toronto, it’s just one point behind the total of the Western Conference leading Vancouver Whitecaps.

With four regular season matches remaining, they’ve played at least one more match on all of the teams around them and sit just five points above the red line. Saturday’s match at home to sixth placed New York Red Bulls could go a long way to determining their postseason fate.

DC United at home, followed by trips to Orlando City and New York City FC round off their season. Those fixtures, and their current unbeaten run of six matches, sees Columbus full of confidence and momentum heading into the stretch, with some even tipping Crew SC to be the East’s dark horses when the playoffs come.

Kamara agrees Columbus have the talent to do some damage in the postseason. They just have to make sure they get there first.

“I think we have a very good group, and you see we’re dangerous on the attack too,” Kamara feels. “You see Kekuta coming in [against Vancouver], who was unbelievable. Then Justin [Meram]’s fantastic, and Pedro [Santos]. Pipo [Federico Higuain] is of course our playmaker, and right now I’m scoring goals also.

“I think we have a lot of firepower, and our midfield and defence have been playing better continuing this season, so it’s looking good. But we have to get into the playoffs, then anything can happen.”