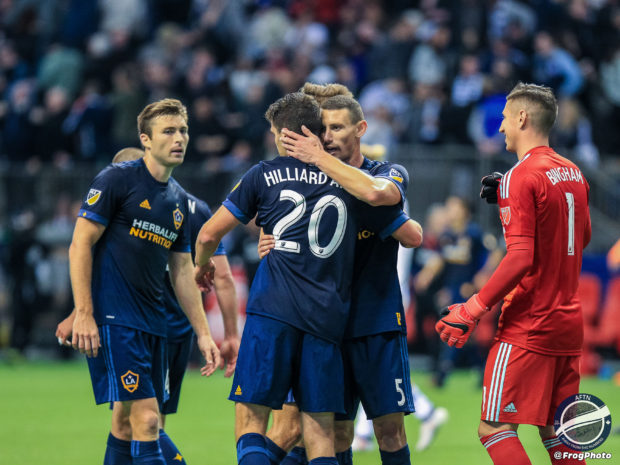 A week ago, L.A. Galaxy defender Tomas Hilliard-Arce took to the B.C. Place turf to make his MLS debut. Fast forward seven days and he’s sitting on the bench for the first ever LA derby, warming up beside a legend of the game in the imposing shape of Zlatan Ibrahimovic.

Considering the week before that trip to Vancouver, the Galaxy’s first round pick from this year’s MLS SuperDraft was just making his USL debut, it’s been an eventful fortnight for the Stanford University standout.

“I feel like there’s been a lot of ups and downs for me,” Hilliard-Arce admitted about his rise to the Galaxy first team when AFTN spoke with him after last week’s match in Vancouver. “Trusting in myself and having confidence that I’m a good player to stand out at both levels. Trusting in God, trusting in my teammates, I think that helps a lot.”

Hilliard-Arce was drafted second overall in this year’s draft, after a stellar four years in the backline at Stanford. The 22-year-old centre back knew it would be an adjustment to the pro game, but he feels having the players around him that he does in L.A. has made that adjustment a lot smoother than it could have been.

“The biggest difference is everyone here is top quality,” Hilliard-Arce feels. “Whereas in college you’ll find that you can outmuscle or outskill players, but here everyone is top class in both physicality and skill. Just being able to work around the opponent’s strengths and finding a way of coming out with a result in tough places.”

No-one would have expected Hilliard-Arce’s MLS debut to come as soon as it did, just three games into the new season, but with a team decimated by injuries and missing nearly a full starting 11 to injuries, suspensions, and international duty, it was a needs must situation for Galaxy coach Sigi Schmid, pitching the young rookie into a three man backline against what can be a very potent Whitecaps attack.

“We came out and we played three in the back tonight because we felt we needed that extra defender in there and that extra ability to head the ball and deal with those things,” Schmid said postgame. “For Tomas Hilliard-Arce, it was a great debut game for him.”

Galaxy goalkeeper David Bingham agreed, but cautioned against getting too carried away about the young star, even if the future does look bright for him.

“I think he had a good debut,” Bingham said of Hilliard-Arce. “He’s a young kid and we don’t want to put too much pressure on him too soon, but he had a very good performance tonight and I’m sure he’s very excited for it, and we’re excited for him, and we look to build on it going forward as well.”

For Hilliard-Arce it was a footballing dream come true. Making his MLS debut, helping to keep a clean sheet, it was more than he could have hoped for, especially as he had to adapt to more than just his new teammates and new surroundings.

“I realized I was going to be playing a new position,” Hilliard-Arce revealed. “I haven’t really played three at the back, but we were given an objective for the three centre backs and wingbacks to not let any goals in and that’s what we did so I feel good about it.

“Being able to be versatile and play multiple positions is something I’d like to add to my game, so to come out, get a shutout, and get the job done, I feel really good right now.” 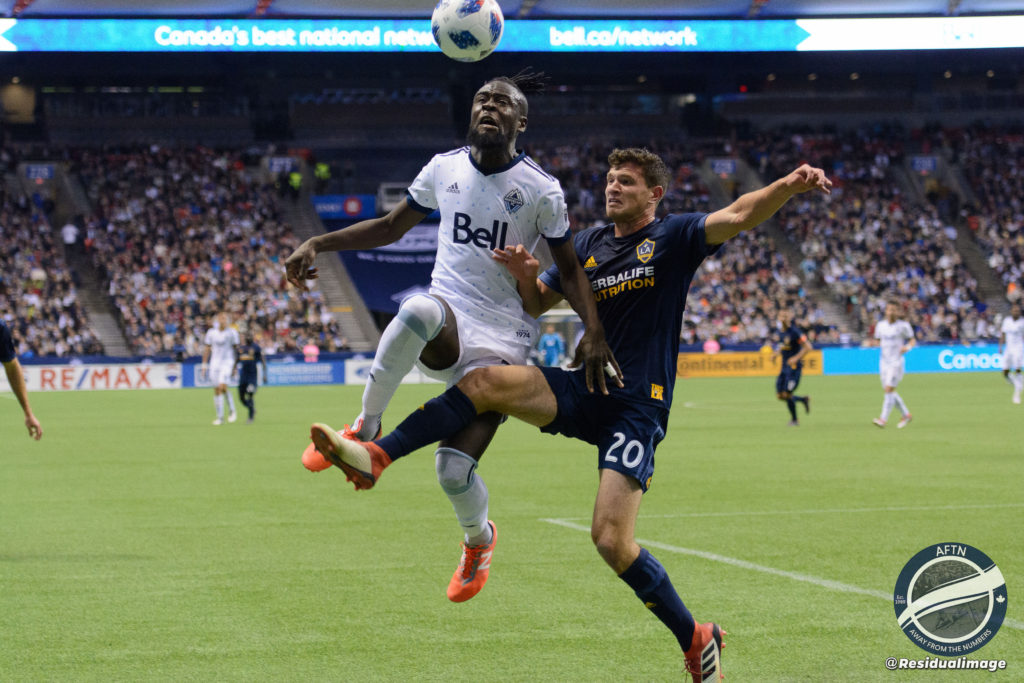 And so he should. The rookie hardly put a foot wrong all match and did well at snuffing out the Whitecaps attack time and again, especially a dangerous presence like Kei Kamara.

“Man, that guy is a handful,” Hilliard-Arce laughed. “I’d say their entire attack is super threatening but that’s exactly what I wanted. I want to play against the best players in the world, and he is certainly one of them.”

And now he gets to play alongside of one in Ibrahimovic.

This season is all about learning the pro game and developing for Hilliard-Arce, and he’s got a couple of great strikers to help hone his defensive game in training in the form of Ibrahimovic and Ola Kamara. With that pair and the experience elsewhere in the side, it’s both an exciting time to be around the team and a massive learning opportunity for the young defender.

“I’m super excited,” Hilliard-Arce admitted. “Just being around Ola Kamara, I’ve asked him for some tips and some things on how to defend such a great player like him. So hopefully I can ask Ibra similar questions and get some similar advice. I know Ashley [Cole] has been a really big mentor, so just looking at these top professionals and just seeing how I can be more like them would be great.”

His play last weekend has seen him rewarded with a spot on the bench in today’s big L.A. derby. The first meeting between the Galaxy and their new cross city rivals Los Angeles F.C. will be the big talking point around MLS this weekend and the must see match.

The City of Angels is abuzz, and Hilliard-Arce can’t wait to be a part of it.

“I feel like there is a lot of pressure on the game for both teams,” Hilliard-Arce told us. “Obviously, it’s the first one and so you have to go out there and set the tone, especially since it’s on our home turf. We are the team in LA and having a star like [Zlatan] Ibrahimovic coming in I think people will be extra focused on that game, so we are going to prepare right and hopefully come out with a good result.”