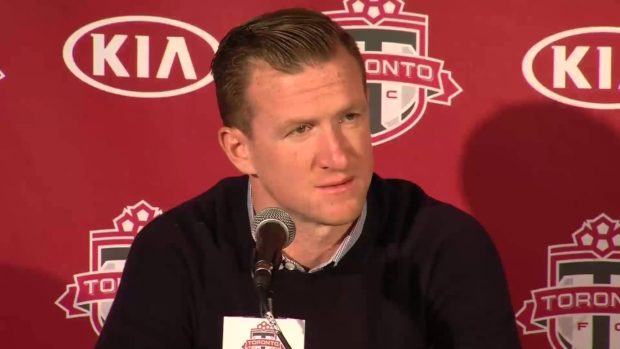 In our “Around The League” series, we chat with some of the more interesting and sometimes lesser known players from the teams that Whitecaps meet in MLS action. We continue it this week with Toronto FC’s Scottish captain, Steven Caldwell.

It’s just over a year since Steven Caldwell left English Championship side Birmingham City for a new adventure across the Atlantic in MLS.

With his new club Toronto FC registering just one win in their first 11 games after he signed, you would be forgiven for thinking that the former Scottish international must have been questioning his decision and wondering just what the hell he’d come to.

Nothing could be further from the truth.

“From pretty much the second I was there, I knew it was the place I wanted to spent the latter part, if not the rest of my career in,” Caldwell told AFTN after wrapping up TFC’s training session at BC Place ahead of Wednesday’s Canadian Championship semi-final second leg.

There’s been a few UK players heading over to MLS in recent years. Some have been successful and stuck around, whilst others have struggled with adapting to the league for whatever reasons. From a Whitecaps standpoint, Barry Robson immediately springs to mind for an example of the latter.

Some have found it easy to settle and love the experience, whilst again, others and/or their families struggle to feel at home in their new environment, as I’m sure Kenny Miller’s wife would attest to.

None of that is a shock. It’s going to happen and you could find a stream of players from various nationalities that fit into those pigeon holes.

Spending a few minutes with Steven Caldwell however and one thing becomes clear very quickly. He is loving life at TFC and in Major League Soccer.

“Thoroughly enjoying it. It’s a fantastic league with a lot of very, very good players. It’s been a real experience for me to travel across North America and visit some tremendous cities, this [Vancouver] obviously being one of them.

“So to enjoy my football and to be part of a building a club that we want to be, challenging for trophies like this [the Canadian Championship] and the MLS Cup as well.”

Caldwell had a 15 year professional career behind him in England before heading over to Canada, playing ten of those in the Premier League.

At 32 he still had a few years left in him at the top level and he was still in demand in both England and Scotland. So how did the move to MLS come about in the first place?

“I was excited to try something new at that stage of my career. I felt I’d done most things in England and I was leaving Birmingham and I was not really enjoying my football the latter stages of my Birmingham career. It was a bit frustrating and I got a call from Ryan.

“He asked me if I’d like to come for a loan period, to see if I liked it and they liked me. No harm done if it never work and I just felt it was a good opportunity. I’d heard great things about Toronto as a club and as a city and I wanted to give it a go.”

They say you have to experience the bad to appreciate the good and it was a horrible first season for Caldwell in Toronto.

The team finished second bottom in the East, with the third worst record in MLS overall and registering only five wins and four clean sheets after Caldwell joined.

From a personal standpoint however, the season did have some success, with the Scottish defender taking over the captaincy in July when Darren O’Dea left.

But that was the old TFC, before the arrival of their executive saviours and big money marquee signings.

It’s hard to really envisage that this year’s side won’t make the playoffs, for the first time in the team’s history, with the talent they have at their disposal. All that said, it has been something of an up and down start to the season for Toronto.

“It’s tough. Every game’s tough. It’s a very difficult league to win consistently and we’ve had some tremendous victories this season and we’ve also had some disappointments, especially at home in the last two league games.

“Like you say, it’s up and down. It’s a long season, there’s still many, many games to go. We feel like we’re in a nice position. We’re way behind in games played on a lot of teams, which is kind of exciting and frustrating and we would like to have played similar games to most teams. We feel we are in a little bit of false position but we’ve got to stop talking about it and actually get on a little bit of a run and climb up this league.”

For a player that has taken the pitch at a number of top stadiums in Europe, both at club level and internationally for Scotland, it’s pleasing to hear how much he enjoys the facilities he has found so far in MLS.

“My favourite is probably Kansas City, but I love so many of them. They’re so different to stadiums in the UK. They’re just kind of unique.”

Pinning him down to just one selection was difficult, so what other ones have left a lasting impression on him so far?

“I love Philly. Obviously Red Bulls is really nice but it’s kind of similar to UK stadiums. I like Dallas. They’re so unique and so different. I like playing in DC as well, even though it’s an old, two big stadium, it’s still got that feeling and it’s got a lot of history to it. This place [BC Place] is fabulous.

“I’m honestly hard pushed to think of one I don’t like playing in. They’re that good. Portland’s incredible. Seattle’s obviously a huge one but they fill it mostly so it’s very exciting to play there.

“There’s so many good stadiums and ours is pretty good. Hopefully we’re going to improve it in the winter and it’s going to be really better than it is. Put a roof over some of the stands and fill it in a little bit at the sides I think.

“It’s definitely an expanding league and with that comes the expansion of the capacities and the standard and qualities of the stadiums.”

Wednesday night’s game at BC Place will be Caldwell’s first experience of playing in Vancouver and on the infamous turf.

“It’s a very poor pitch to play football on. I’m sure it’s every bit as frustrating for Robbo and for Vancouver to have play on this most weeks. Disappointing but what a fabulous stadium it is.

“It’s outstanding. I’m really impressed with it. It’s some sight and just a shame that we can’t have a nice grass pitch to move the ball on.”

He won’t find many people here disagreeing with that.

With so much travel involved in MLS, it’s always nice to hear a player from overseas wax lyrical about the whole experience of seeing different cities. As mentioned, it’s something which Caldwell feels has been an enjoyable part of his MLS experience so far.

And although this will be his first time playing in Vancouver, he has been here before.

“It’s a real beautiful city. I’ve been once before actually, in 2005, but for a very brief time. It’s nice to be here this time and be here kind of early and have a little bit of a look around and experience it. My sister lived here for a while as well and she only has good things to say about the place.”

A year into his MLS career, Caldwell is content, happy and hoping for a much different upturn in fortunes for Toronto FC this season.

But whilst he would recommend coming to MLS to any of his friends and former teammates back home in a heartbeat, the Scot doesn’t feel it’s going to be that easy for a lot of them to come over, especially with the wealth of domestic talent that we are starting to see in the league.

“There’s a lot of people in the UK who would love to have the opportunity to come here, to play in these stadiums and these cities. I’m pretty sure that most people are trying in some part of their careers to get here but it’s a difficult thing to do.

“We’ve got a lot of excellent players in North America, and obviously South America, that play in MLS, so you have to prove your worth and certain things have to align for that to happen.”