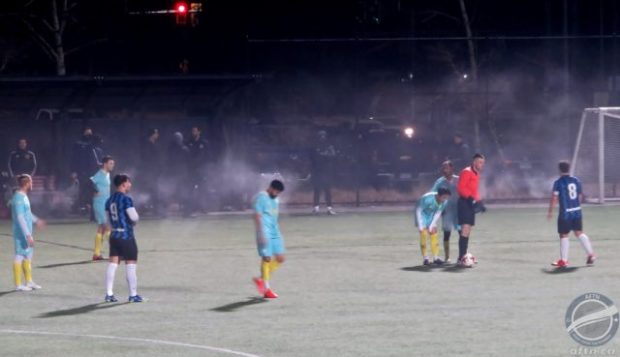 The Vancouver Metro Soccer League (VMSL) Premier Division season is heading down the final stretch and with just a few matchdays remaining, the action is hotting up at both ends of the table.

At the top, as things currently stand, BB5 United need just four points to officially secure the title, but with a match-up against second placed VUFC Hibernian coming up next weekend, a win then will do it for them. The battle to avoid the drop has suddenly burst into life, with three of the bottom four teams coming away with massive wins this past weekend. With two automatically going down, and another in a relegation playoff, the coming weeks are going to be a dogfight.

That will have to wait for most of the teams this weekend, however, as the second round of the Imperial Cup takes all the headlines.

The Premier Division action got underway up at UBC on Friday evening as the in-form VUFC Hibernian made it five straight wins with a 3-1 victory over relegation threatened SFC Pegasus. All the goals came in the second half of this one, with Farzad Rajab Ali opening the scoring for Hibernian on the hour mark. Christopher Lee struck to make it 2-0 nine minutes later, and although the Horsemen pulled one back through Jora Saran in the 80th minute, their joy was short lived as Stefan Colbow restored VUFC’s two-goal advantage immediately to end the scoring and the game as a contest.

That win moved VUFC into a share of first place in the standings ahead of BB5’s match later that night, and they finished the weekend three points back in second, looking to have all but wrapped up a Provincial Cup spot. It’s a totally different story for Pegasus, who are fighting for their top flight lives and were the only ones in the bottom four not to take three points last weekend.

The Horsemen’s plight was made all the worse as the team above them in the table, Burnaby Selects White Eagles, went to Coquitlam Metro Ford Wolves on Friday evening and came away with a big 1-0 victory. Mladen Ljumovic grabbed his seventh goal of the season, and sixth of the league campaign, to give the White Eagles what could be a massive win and move them four points clear of Pegasus.

Newton Athletic Park was the venue for the last pair of Friday night under the lights matches.

BCT Rovers Hurricanes are making a late push for a Provincial Cup spot, and after crashing out in the first round of the Imperial Cup last weekend, they need a strong finish in the league to secure it. Croatia SC are also looking to get into the Provincials and were sitting in 6th place ahead of this game, with the Hurricanes one point behind them in 7th. Sixth may be good enough to get into the Provincial Cup depending on who the Imperial Cup finalists are and if it is, the Hurricanes took a big step towards making it theirs with a hard fought 3-2 win over Croatia.

The Surrey side were looking comfortable at the half after scoring two goals in a minute a quarter of an hour in through Nick Soolsma and Cam Hundal. Croatia hit back after the interval though and Emile Saimovici pulled one back for the visitors five minutes into the second half. David Malamura brought Croatia back level in the 69th minute, but that parity was to last only four minutes before Harpreet Khakh finished off a nice cutback into the box to put the Hurricanes back into a lead they were to hold on to this time.

Croatia’s Edward Tsen saw red for a second booking five minutes into stoppage time, capping off a bad night for the team, who haw the Hurricanes leapfrog them in the standings with three games left to play. 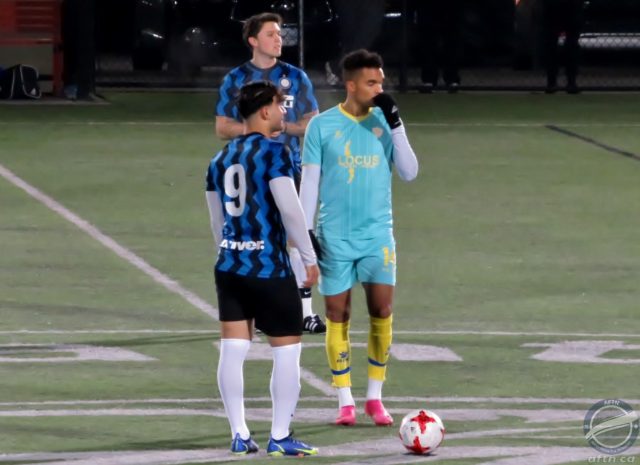 The league leaders closed out the Friday night action as BB5 United CCB hosted Inter EDC at Newton Stadium and came through relatively unscathed, carving out a deserved 2-1 victory to move one step closer to the VMSL title.

BB5 came out strong and carved out a number of early chances, forcing a couple of good saves out of the Inter keeper while doing a good job at keeping the dangerous visitor’s attack at bay. They eventually got the breakthrough in the 31st minute when Boris Si opened the scoring, with the aid of a deflection, and that was how things stayed until half time.

Both teams had chances in the second half, but it felt like only a matter of time before BB5 added to their tally and they did just that in the 71st minute when Rylan Sangha was on hand to pounce on a parried shot from the keeper, to fire home from close range.

Credit to Inter though who pushed to the end and they were rewarded with the goal of the game as Whitecaps academy alumni Alan Camacho fired home a stunning dipping strike from the edge of the box to pull them back to within one in the 89th minute, but it was too little, too late and BB5 saw out the remaining minutes for another three points.

The battle to avoid relegation took centre stage over the rest of the weekend, with the bottom two teams showing some form and coming away with three big points each.

Goals from Andre Herath and Anthony Paiero gave NVFC Norvan a 2-0 win over Rino’s VSC Coastal at Fen Burdett Stadium on Saturday afternoon, a win that moved them level on points with SFC Pegasus with three games to go as they look to avoid finishing in one of the automatic relegation places. The two teams meet in their last scheduled match of the season next month, so there could be a lot on the line in that one.

Sunday saw last placed MAFC Elite host West Van FC at Burnaby Lake and the black and yellows also came away with a big 2-0 victory thanks to goals from Hewa Barzani and Tipo Conteh. MAFC are still adrift at the bottom of the table despite the victory, five points from potential safety but with a game in hand, so still a lot to play for for them.

So after all of those results, here’s how the VMSL Premier standings look: 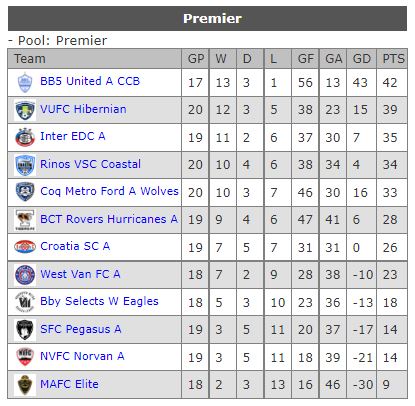 It’s the second round of the Imperial Cup that takes centre stage this weekend with nine Premier teams involved over seven ties (BB5 have a bye into the quarter finals after a forfeit by Metropolitan FC). That leaves just one league match on the slate, with Burnaby Selects White Eagles at home to BCT Rovers Hurricanes at Burnaby Lake on Sunday. Kick off is 6pm.

Here’s the schedule for the rest of the weekend. 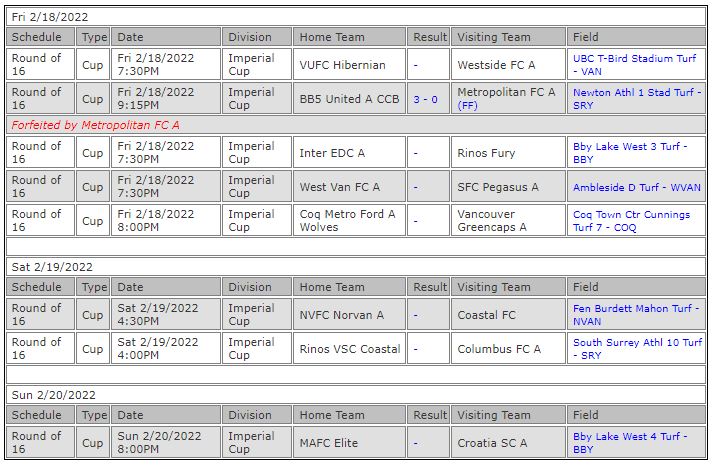