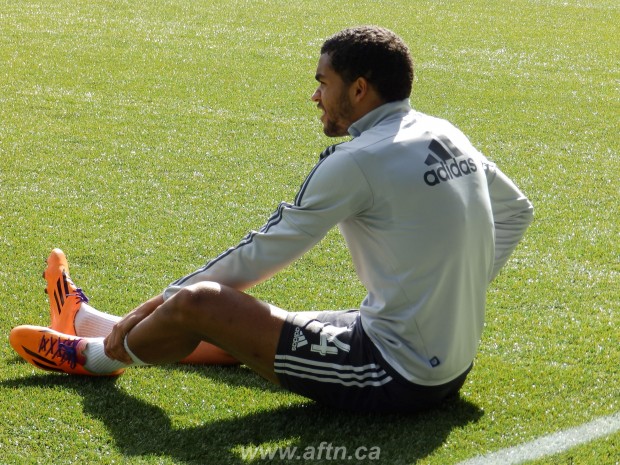 As always, the offseason has seen several comings and goings on Vancouver Whitecaps’ MLS roster.

Some were expected, some less so. One particular piece of eyebrow raising business though came from a re-signing.

When the Whitecaps announced in December that striker Caleb Clarke had signed a new deal with the club, it was a little surprising. The 21-year-old Residency alumni had headed to Germany in July 2013 for a year’s loan with Bundesliga side Augsburg and had done well with their Under-23 side before an injury saw him head home last summer to rehab.

Many expected that the Canadian international’s footballing future would lie on the other side of the Atlantic, but Caleb is back with his hometown team, refreshed, invigorated and hungry to stake a place in the Whitecaps MLS starting eleven.

Clarke became the Whitecaps’ sixth homegrown player to be signed to a MLS contract in April 2012, after an exemplary few years in the ‘Caps Residency program.

The 2011/12 USSDA season had seen Clarke play a key role in the Whitecaps’ U18s run to the Championship game, scoring 24 goals in 27 games over the course of the campaign. Those of us who had watched him play the past couple of seasons knew what an exciting attacking talent he was and were excited to see what he could bring, and how he would develop, in the first team.

Things didn’t quite pan out as planned however.

Clarke didn’t get much of a chance to shine under Martin Rennie. He saw time in both Reserve League and PDL action but his career MLS stats sheet reads just two substitute appearances and 15 minutes of action. Both games came late in his rookie season.

The striker seemed to fall out of favour with the ‘Caps coach the next year. Clarke was understandably unhappy at the lack of opportunities, while Rennie seemed unhappy with his unhappiness.

Things seemed to come to a head in June. Whether to get his fitness levels up or to send a message to the young player, Rennie played a then 20-year-old Clarke in a U18s warm up match as they prepared for the USSDA playoffs. Clarke sent his own message, scoring a very impressive first half hat-trick before being subbed off at half time.

A loan deal was looking the best outcome for both parties, and that’s just what happened.

Clarke did well in Germany and looked to have settled. With all that had happened with the Whitecaps in the past couple of years, we thought that was likely to sadly be the last we saw of him in a ‘Caps jersey. But with a new attitude, a new management team in place, a new direction and a different atmosphere at the club, Clarke made the decision to ink a new deal and fight for MLS minutes.

“I was just really happy with how the club has changed over the past couple of years,” Clarke told AFTN. “I think that the team spirit and stuff is a lot better than when I left, so I thought I’d just stick around and try and make my spot in the first team.”

FC Augsburg II play in the Regionalliga Bayern, the fourth tier of German football. Clarke played 26 matches for them last season, bagging 8 goals. So how did he find the whole German experience?

“It was really good. I got to play a lot of games. It was really crazy. I got to the play the games that I couldn’t play here. But after the injury, it’s just great to be back and back on the field for sure.”

With Augsburg’s season coming to an end, Clarke’s footballing year was to come to an abrupt halt in May as he suffered a ruptured quadriceps muscle.

“It started to feel better after a couple of days and I was thinking maybe I’ll get into the last game. But I got the MRI back and the tendon that connects your quad muscle to your hip, it had completely ripped off. I had to get surgery right away.

“I was going to have it there but I flew back. I was able to get it the day after I got back, so I got it here. Since then I’ve been trying to get back. It’s a long process.”

Clarke enjoyed his time in Germany and having another Canadian, and former Whitecaps Residency teammate, Daniel Stanese on the team helped them both settle in.

A few of the ‘Caps younger players had training stints in the UK in December. Carl Robinson mentioned last week that they had come back with their eyes opened and a new appreciation as to what is needed to make it at the higher level of the game.

Clarke was playing on Augsburg’s Under-23 team, but was training with the full first team squad as well. Did he notice the level there considerably higher compared to what he was used to in MLS?

“Yeah, especially at the start,” Clarke told us. “This is a really physical, athletic league and there it’s a lot more technical, tactical. It’s quicker, so you have to get to that and obviously it took a little bit to get used to. And training with the first team in Augsburg is even quicker, so yeah, it took a while to get used to but when I did it was great and I liked it a lot.”

But now he’s back in Vancouver and looking to stake a claim to a starting spot in the Whitecaps team for the upcoming MLS season.

What’s different now, of course, is that Clarke will be assured playing time and crucial competitive development minutes in some form most weekends. He might play MLS minutes. He might start USL PRO games. He will almost certainly see minutes in both over the season, and possibly both on the same weekend.

If you thought that the new WFC2 team must have played a part in Clarke re-signing with the Whitecaps, it turns out that while it’s a nice added benefit, that wasn’t a persuading factor to his new deal.

“To be honest, I didn’t even know before I made my decision,” Clarke told us. “Obviously that helps because it’s more games and it was something that was lacking last year that the younger guys weren’t able to have those games, so it’s good to get it now. It’ll be a good thing.”

As Clarke mentioned, his rehabbing from the injury has been a long process. Carl Robinson had hoped he might have had him available towards the end of last season to provide some much needed firepower to his stuttering attack, but it wasn’t to be.

The Residency alumni looked sharp in training towards the end of last year. Robinson liked what he saw and both he and Clarke know what the young striker is capable of bringing to the MLS squad and what he needs to work on to make his impact on the league.

“I feel that one of my strengths is finishing,” Clarke acknowledged. “I scored a lot of goals there and hopefully I can bring that here. To get into the first team, I’ve got to get fit and sharp again first. From there, just focus on demanding the ball and being strong, being a leader up front and scoring goals of course. That’ll get me in there I’m sure!”

It’s great to see Caleb Clarke back in a Whitecaps shirt. We wish him well and we’re looking forward to seeing how he’s developed during his time in Germany and in the 18 months since he last played a MLS match.

So what are his goals and aspirations for the season ahead?

“Definitely to get into MLS games and to get into a regular starting spot, coming off the bench, that kind of thing. Really help the team score goals. That’s what I do, so hopefully I can do that for the team.”