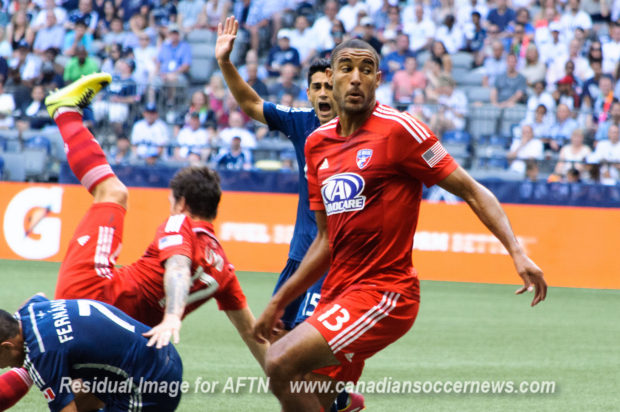 Tesho Akindele caused quite the commotion last week when speculation was rife that the Calgary born FC Dallas striker was set to shun the Canadian national team in favour of a call-up from the US.

The speculation was given further credence when the Canadian Soccer Association (CSA) announced their squad on Thursday for a week long camp in Florida and a friendly against Panama next Sunday.

Not only was Akindele’s name missing from the 23 man roster, but the CSA went as far as to include the sentence “Of note, MLS FC Dallas Tesho Akindele declined an invitation to attend the camp,” in their press release.

The online knives were soon out, two and two were put together to make five, and Akindele was being added to the growing list of Canadian footballers to call another national team their home.

But as is often the case with internet speculation, all is not quite as it first seemed, as AFTN discovered when we spoke with Akindele in Seattle on Monday evening.

Earlier in the day, Jurgen Klinsmann named his 25 man roster for the US’ friendlies against Colombia and Ireland on Friday and next Tuesday. Akindele was not included in the squad. Not a major surprise, as he was thought to be on the radar for a January US camp made up of only domestic players.

It should be noted that Akindele doesn’t currently hold a US passport. Why is this important? Well, he could still attend a camp, just as Marco Bustos did with the Chilean U20s in the summer, but what it does mean is that under FIFA rules (and according to this article), he is technically not eligible to play for the US just now, so if he played for Canada (even in a friendly), he can’t then make a one-time switch later if the US came-a-calling.

Before the conspiracy theorists take hold, bear in mind that Canada’s squad were going to be starting training in Florida two days ago on Sunday. The day before Akindele was set to play in a crunch MLS Western Conference semi-final. There’s no way Canada Soccer should even be inviting him to a camp under such circumstances. He was quite right to decline the invite and by making mention of it in the press release, you are left wondering whether it was an attempt to ramp up the pressure on the player to make a pro Canadian decision.

So just what is the script? We caught up with Akindele and asked him just where the land lies in terms of suiting up for Canada at international level. Did he decline the invite to the Canada camp because Dallas were still involved in the playoffs or is there more to it and he is keeping open the option of playing for the US?

“I guess a little bit of both,” Akindele admitted honestly to AFTN. “Right now I was just kind of focused on the playoffs and it just wasn’t the right time for me to go into the camp I felt after talking to some people close to me.

“But I talked to Canada. They know how I feel about it, so I think it’s on good terms just now.”

So is there still a chance that we’ll see Akindele in a Canadian national team jersey one day soon?

You can almost hear those knives being sharpened again. Some Canadian fans will certainly see a player who is courting the prettier sister, but keeping her rather plain one on hand just in case things don’t work out. There is clearly an element of that but Akindele’s situation is a bit different to some that have gone before.

Akindele was born in Calgary but he moved to the US with his family and grew up in the Denver suburb of Thornton, Colorado at the age of eight. He has a Nigerian father and a Canadian mother, making him eligible for all three countries.

His grandparents remained in BC however and a young Akindele spent his summers in Lake Country visiting them, making the trip every year to Kelowna where they had a house on the shores of Lake Okanagan. He went tubing, karting, hiking and just hanging out. A typical Canadian kid.

“Been there every summer since I was a little kid,” Akindele told reporters, including AFTN’s Steve Pandher, after Dallas played at BC Place on July 27th. “I still came back to Canada every summer to visit my grandparents. I still have a ton of family here. I feel pretty Canadian. I love the country.

“I definitely feel like a dual citizen right now between the US and Canada, but definitely part of me is definitely Canadian.”

Akindele fell onto Sean Fleming’s radar in 2009 and he was brought into a Canadian U17 camp, making his youth debut against Costa Rica. After that match, the then 17-year-old didn’t hear anything else from Canada, although by his own admission, “I didn’t play that well so it makes sense why they wouldn’t have called me back.”

The striker then went off to college, where he lit up the scoring charts at the NCAA Division II Colorado School of Mines, becoming their all-time leading scorer with 76 goals in his four years there and garnering four time All-American honours.

His college performances attracted Dallas coach Oscar Pareja, who took a punt on him at this year’s MLS SuperDraft, selecting him sixth overall, and a seven goal rookie season in Major League Soccer has now brought him back onto the radar at international level.

At least in the press and on social media, as Akindele confirmed back in July that the CSA hadn’t actually been in touch with him.

“Nobody’s called me yet,” he revealed. “I heard some stuff at the beginning of the season that they might call me, but nobody’s called me recently. It would just be a good opportunity if they do call me.

“Nobody else has called me, so I’m leaning towards Canada. I’m just thankful that there’s a buzz around my name with Canada.”

The CSA now seem to have found Akindele’s phone number, interestingly after his form had somewhat dipped in the final ten games of the regular season. They may have been a little surprised that he hasn’t simply come running, but, to me at least, it’s understandable when they showed little interest in his progress it appears up to this point of his career.

Akindele is keeping his options open. He has spent most of his life in the US. What he chooses is still up in the air, but we’ll leave you with this final quote from back in July when Akindele was asked what it would mean to him to play for Canada.

“It would be great. This is a country that deserves a good soccer team. If I could be one piece of that team, I’d feel fantastic.

“Lately I think the team has been struggling to score goals. They see somebody scoring goals, so everybody is kind of excited about that. Hopefully I can be that guy.”

I’m sure we’ll soon find out whether he will be or not.