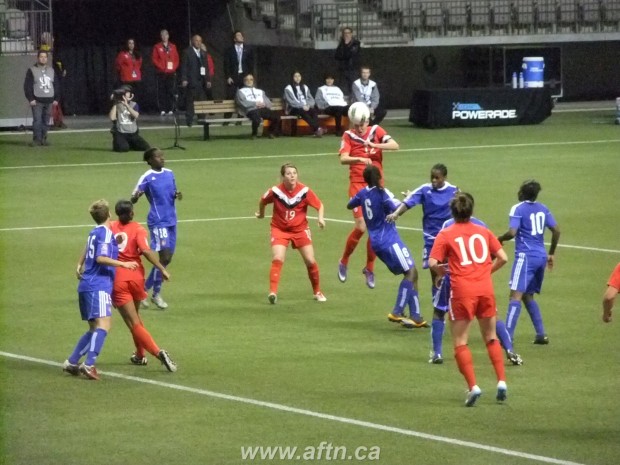 Canada aren’t going to have a much easier time of it at the Women’s 2012 Olympic qualifiers than they did tonight against Haiti.

The result was never in doubt and when Christina Julien knocked in the first of three first half goals after only seven minutes, you did get the feeling that the floodgates were about to open. And they did, to an extent.

A first half brace from Christine Sinclair, the second of which was beautifully finished, gave the Canadian girls a 3-0 lead at the half and another brace from Sinclair in the second and an injury time goal from Kelly Parker saw Canada give the Haitians six of the best, running out eventual 6-0 winners. 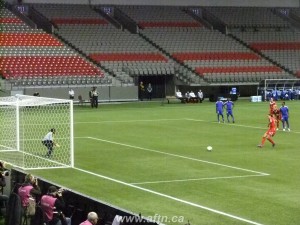 In many ways it was a difficult game for the hosts. You know you’re going to win and you know you have two more group games to just see the formalities through on before the crunch semi. As players, you don’t want to expend too much unnecessary energy and you certainly don’t want to do anything that picks you up an injury. Balance that with wanting to give yourself a good run out and impress the coach enough to be one of the starters for the key semi final next Friday.

All things considered, the Canadian girls did a bang up job.

They certainly took their foot off the gas a little at times, and were never really troubled, but they showed the professionalism they needed to get the job done.

Canadian Coach John Herdman was pleased with what he saw:

“I am pretty happy with the match tonight. They team stayed patient, put together some good passes, played through the midfield and was able to carve the backline of Haiti. If we play like this there are few teams that play with us. It’s an exciting time for Canada.”

Captain fantastic Sinclair’s four goal haul was clearly the highlight of the match, which Herdman acknowledged after the game:

“Christine Sinclair was outstanding tonight. Certain players rise to the occasion and she’s one of them. I think she will cherish this day.”

Although Sinclair was the standout, there were a few other good performances out there.

Julien did well in support and Kaylyn Kyle’s performance as a second half sub, will put her in the reckoning for a starting place after the group games and I was personally pleased to see Chelsea Stewart come on at the half and link up well with Kyle on the left!

The players now need to rest up and the squad rotation will help do that in the next two games. They managed to keep themselves free from injury, from what we know (Lauren Sesselmann is ok), and that was always going to be the biggest worry in these group games.

Sadly the other main talking point of the night, outside of Sinclair, was the terrible second half injury to Haiti goalkeeper Geralda Saintilus, who suffered a horror collision with her own defender and has been taken to hospital with suspected spinal injuries. Our thoughts are with her. 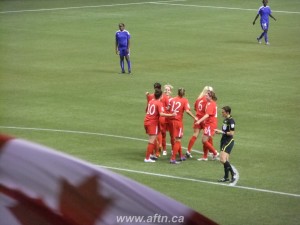 With the group games and semi finals being played as double headers, it was quite worrying when a very sparse crowd trickled into BC Place for the first match of the tournament. Let’s be honest though, I’m not sure even the most passionate fan of the female game would want to turn up at 5pm on a freezing cold night to watch Costa Rica and Cuba ‘battle’ it out in a terrible game of football.

Thankfully the numbers increased for the Canadian ladies and a crowd of 7,627 was given as the official attendance.

In amongst that crowd, was a 100 strong contingent of Vancouver Southsiders.

The supporters’ group bought a section for the games and for many, myself included, it was their first experience of a live women’s game and talking to a few of the guys during the second half, they really enjoyed the occasion and a few of them were surprised as the quality of the football on display at times.

They certainly added some atmosphere to proceedings and it was interesting to hear Whitecaps standards tweaked to have a Canadian and ‘red and white’ theme. My particular favourites were “We all dream of a team of Kaylyn Kyles” and a cheeky rendition of the Vincente Arze ‘shag my wife’ song.

The Southsiders also serenaded local lass Chelsea Buckland, who has her birthday tomorrow, and presented her with a signed card after the game, which included some good luck messages and at least one phone number and dinner date invitation!

The players certainly appreciated it at the end and a number of fans from the adjoining sections came across to say job well done.

Hopefully the stadium logistics will be a better done job for the next game, as the beer, food and drink line up at half time were horrendous for such a small crowd. I don’t think they expected the Southsiders to eat and drink so much! Surely they should know by now!

Cuba are next up on Saturday, before what will be the top spot decider against Costa Rica on Monday evening.

London is most certainly calling. Tomorrow, the girls get to see how their American and Mexican rivals are shaping up. They just need to stay focussed and continue the professional and clinical show on display tonight.

It’s six-love at the end of the first set. Game on.