This past weekend proved to be the busiest one yet for Canadian players in Major League Soccer. In total, 11 players took the pitch over the three days, playing a total of 605 minutes. Six of those players started for their teams, with four of them playing the full 90 minutes.

Only one Canadian player found the scoresheet in MLS this week. Tesho Akindele came off the bench at half time for Dallas and scored the 77th minute equaliser in the 1-1 home draw with Columbus. Akindele has yet to start for the Texans this season. It might have been one of the easiest goals he’s got in his MLS career so far, but maybe it will be the spark to change that. You can watch it below.

In the updated season so far standings, Vancouver’s Fraser Aird continues to lead the way in appearances and overall minutes played, making his fourth start and fifth appearance of the year in the ‘Caps 0-0 draw with LA. Back to back clean sheets now for Aird and the Whitecaps defence.

Despite hobbling off early in Orlando’s win over Portland, Cyle Larin still leads the goalscoring charts with three.

Here’s the full ‘Canadians In MLS’ totals after week five. 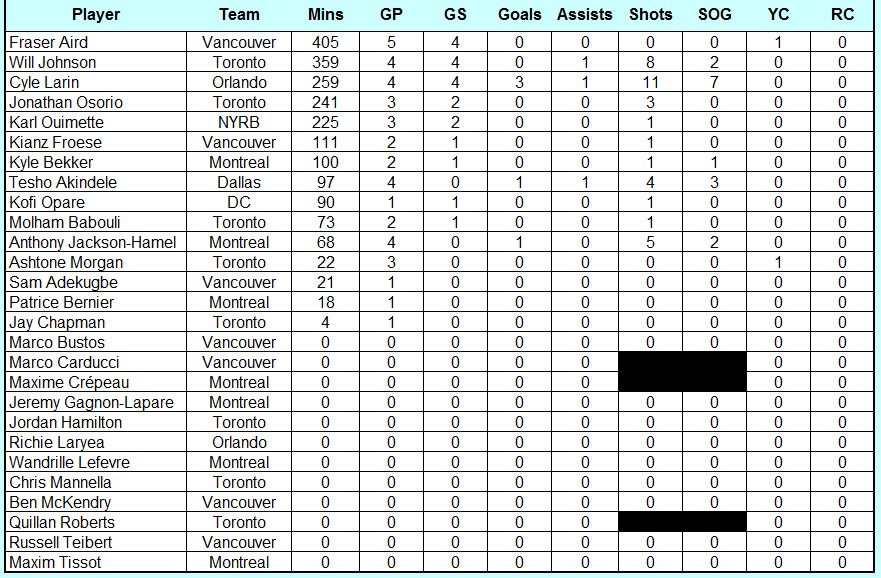