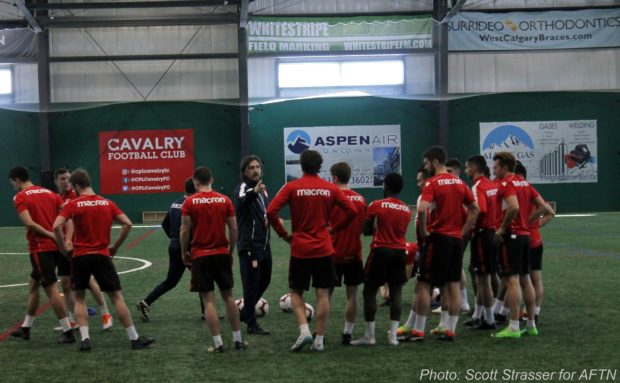 The depth of Cavalry Football Club’s inaugural lineup will be tested early and often during the first weeks of the Canadian Premier League (CPL) season.

After months of waiting, the league released the fixture schedule Feb. 27, revealing to fans when and where their clubs will play throughout the 2019 season.

The first month of the season will be the most demanding for Cavalry FC, with seven matches to be played between May 4 and May 25, if you include the two outings against Pacific FC during the opening round of the Canadian Championship.

By the end of that three-week period, the Calgary club will have already faced every team in the league at least once.

“There’s going to be no secrets by the end of it,” said Cavalry FC head coach/general manager Tommy Wheeldon Jr.

“I’m sure everyone is going to be trying to change up a few things tactically. You want to see the makings of every team early. We get to do that in the first month, during the Spring season, and it will set the tone for the rest of it.”

After holding a prospects’ camp at the end of February, Cavalry FC kicked off their official pre-season camp on March 4, with a two-hour training session at Foothills Soccer Club’s indoor training facility in southeast Calgary. 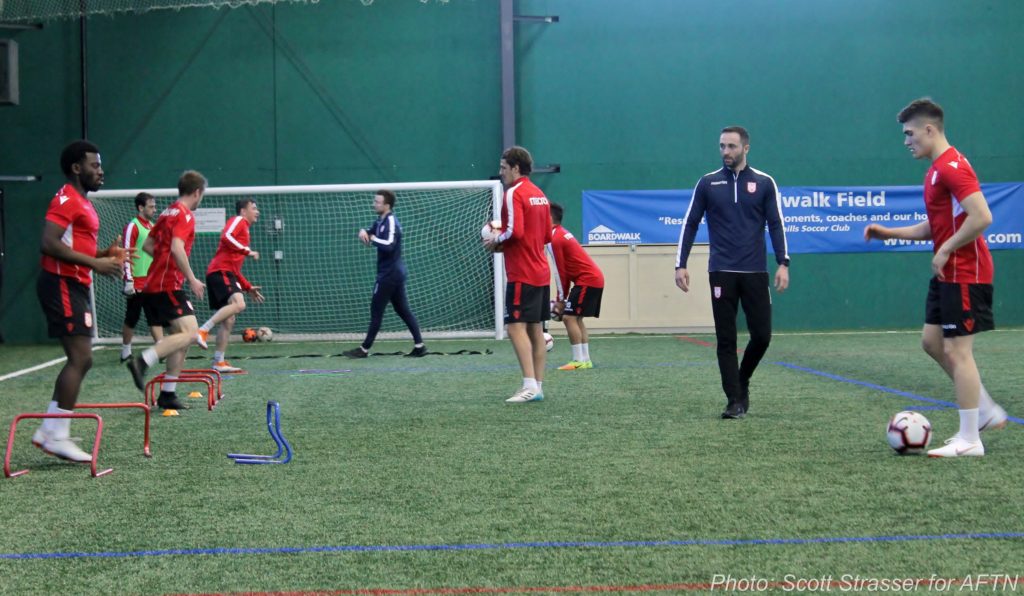 It was a high-tempo session that included passing drills and small possession games, followed by a larger seven-vs.-seven match for the final 20 minutes.

“The gaffer told me he’s got us focusing on one thing at a time,” said international signing Jordan Brown, a 22-year-old striker from London, England. “This morning, his emphasis was on tempo. Everything we do, we have to do it with tempo, whether it’s passing or getting the ball back.

“This is the first time we’ve been together, so based on the first day, I think we’re going in the right direction.”

Wheeldon Jr. said the focus for the first training sessions will be on establishing habits, rather than determining tactics or formations.

“We have some habits we want to install – what we do with and without the ball,” he said. “Once we do that, we’ll work on some tactics. But it all starts with habits.”

The team’s first real test as a unit will be on March 19, when Cavalry FC takes on Vancouver Whitecaps FC’s U23s. Another pre-season fixture will be held March 30 against FC Edmonton. Fans will have to wait to watch the club, however, as both of those matches will be held behind-closed-doors.

“We’re looking forward to testing it,” Wheeldon Jr. said. “What a great group to test it against [the Whitecaps]. They’ll be young and fit, and they’ll have started their season early. We’ll be looking at getting some game minutes in.”

Following those two early exhibitions, Cavalry FC will join the rest of the CPL teams on a pre-season trip to the Dominican Republic in April. 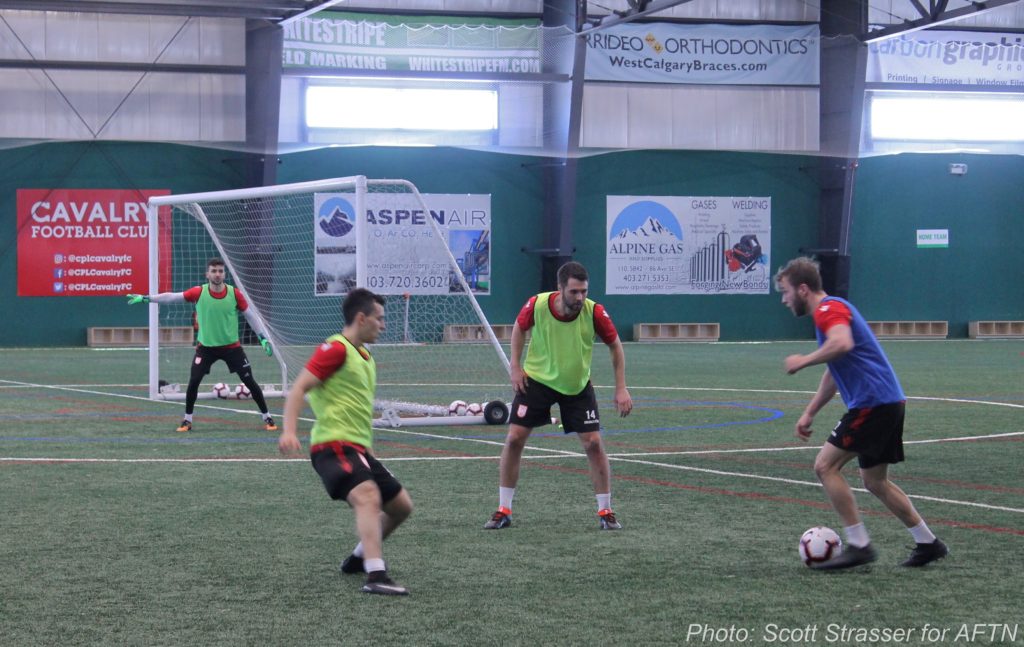 With 16 signings announced thus far, there is still room for some more players to join Cavalry’s ranks, and the club has confirmed other players who will be training with Cavalry throughout March and April.

There were some notable new faces at training on Monday, including 1993-born midfielder Mauro Eustaquio, who previously played for the Ottawa Fury and FC Edmonton in the NASL.

While born in Portugal, Eustaquio grew up in Ontario and is a Canadian citizen, with caps at the U20 and U23 level. He was most recently playing for Penn FC in the USL.

“He unfortunately had an injury last year, but he has 70, 80 pro games under his belt in the NASL with the Ottawa Fury and FC Edmonton,” said Wheeldon Jr. “He’s a player we’re interested in looking at. We want to make sure he’s as sharp as the player [club coach Martin Nash] worked with in Ottawa.”

Another new face was 1993-born Danny Deakin, of England. Deakin, a Sheffield United academy player, was selected by Orlando City in the 2017 MLS SuperDraft Pick (No. 64), and spent time with the club’s reserve side in the USL.

But there were some familiar players lacing their boots for the first training session as well, including two more players from last year’s PDL championship-winning Foothills FC squad – Tofa Fakunle and Jay Wheeldon.

“I think it was important we didn’t name our whole roster right away without looking at where we are, the chemistry we’re developing, and what pieces we’ll need,” said Wheeldon Jr.

“Now we have the players together, so we’ll be able to see what else we need to complete the roster.” 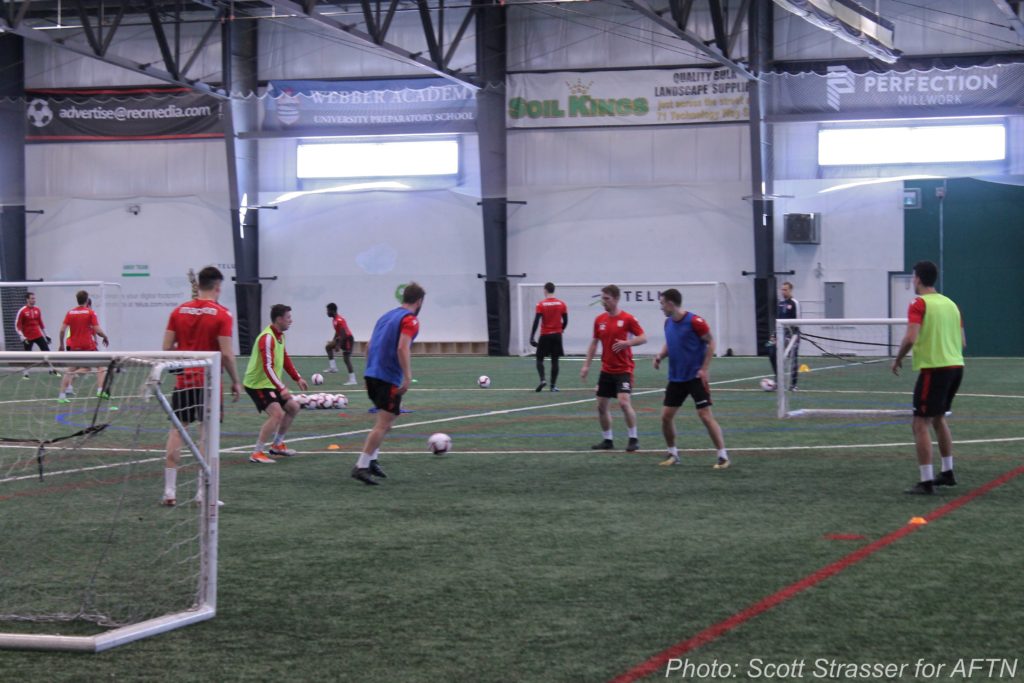