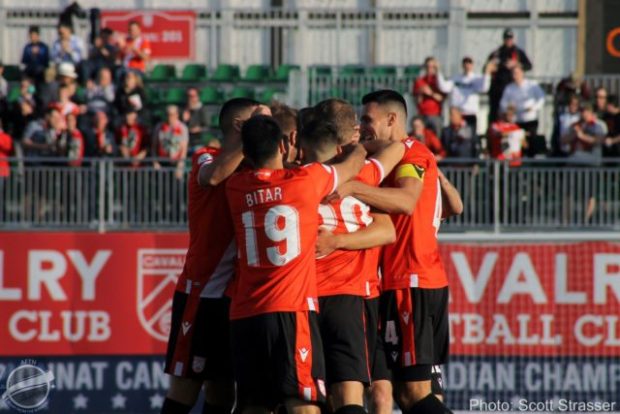 On a day when more than half the teams in the Canadian Premier League were tied for last place, Cavalry FC showed that the spring truly belongs to them.

Calgary’s new pro soccer team put the icing on their 10-game CPL spring season cake with a 2-0 victory over York9 FC in Ontario on June 26.

With the win, Cavalry FC clinched the CPL’s inaugural spring league title in style, overcoming their only close competitor in second-place Forge FC. After nine games, and with just one fixture left, Cavalry leads the table with an insurmountable 8-1-0 record.

Apart from the 19 points that Forge – the sole team to beat Cavalry – has garnered this spring season, the remaining five teams have either eight or nine points. It’s clear a solid gap in quality has emerged between the CPL’s top two teams and the rest of the table.

“We’re in this position because we said that’s what we wanted to do from day one in preseason camp,” said Cavalry’s head coach Tommy Wheeldon Jr during the post-game press conference. “From all the conversations I had with all the guys from all over the place, we wanted to be a team that is competing for championships, whether it’s spring, fall, or the main one at the end.”

The result marked Cavalry goalkeeper Marco Carducci’s fifth clean sheet of the season – the highest in the CPL. The Calgary ‘keeper has only let in four goals this campaign, and he showed another elegant performance between the posts for Cavalry, with five saves against York9.

Both of Cavalry’s goals against York came in the first half. Striker Dominique Malonga put Cavalry on the board in the 24th minute with a looping shot into the top-left corner from 22 yards out, before Julian Buescher doubled the visitors’ lead with a well-taken indirect free kick about 10 minutes later from slightly farther back.

The free kick was a clever set piece that included two short passes from Jose Escalante and Elijah Adekugbe before Buescher sent the ball over the wall and into the bottom left corner of York’s goal. The play appeared to wrong-foot York goalkeeper Nathan Ingham, who initially stepped to his left before correcting himself and diving in the other direction. He got a hand to the ball, but it wasn’t enough to stop its flight into the net.

With a two-goal cushion before halftime, Cavalry’s second-half performance was a matter of shoring up the defence. Tommy Wheeldon Jr. brought on right back Nathan Mavila for Malonga before the hour mark, and he later subbed in center back Joel Waterman for winger Jose Escalante. 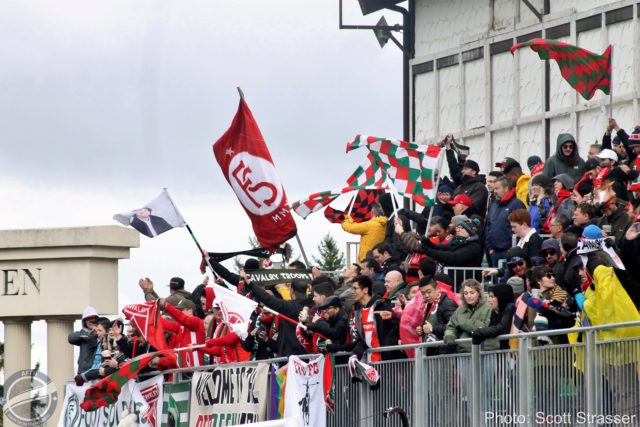 By winning the spring season, Cavalry have already booked a spot in the 2019 CPL Championship – a two-game series between the winners of the league’s spring and fall seasons. The title-deciding series will take place in late October and early November. In the case that Cavalry win the fall season as well, they will play the team that has the second-highest points total throughout both seasons.

It’s an interesting format to decide a champion. Theoretically speaking, Cavalry could lose their remaining 19 fixtures and they would still play for the league title. But Wheeldon Jr. ensured reporters that Cavalry will not be taking its foot off the gas during their 18-game fall campaign.

“It’s going to take a lot of effort from the guys and we’re going to be on the training ground and in the video room, and we’ll just keep putting the work in, because that’s how we grow the game and improve as a club.”

Cavalry FC will officially wrap up the spring season with a trip to Vancouver Island on Canada Day to take on Pacific FC. While Cavalry comfortably overcame the Langford-based team in the first round of the Canadian Championship, this will be the first time the teams play each other in the CPL.

“I think it’s going to be a celebration for us,” said Cavalry center back Mason Trafford. “We’ve now wrapped up the league, and we’re going to go to a beautiful place in Victoria, and it’s another chance for us as players to show what we can do.”