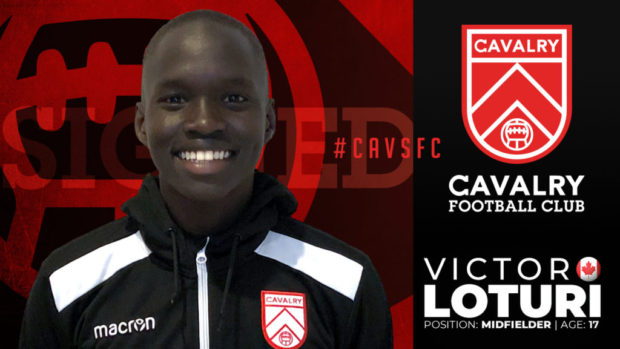 At 17 years of age, Loturi is, by some distance, Cavalry’s youngest signing, and he will be one of the youngest players in the inaugural Canadian Premier League season.

Despite his youth, head coach and general manager Tommy Wheeldon Jr. said the midfielder has proven he is ready for the pro game.

The 2001-born Loturi came through the Calgary Northside Soccer Club, before joining the Foothills Generation program last winter. It was there he caught the eye of Foothills coach and Cavalry player Jay Wheeldon.

“As he moved across to Foothills Generation program for the winter, my brother, who was his coach, said ‘This lad is ready. He’s doing things with a ball that I haven’t seen in a long time’,” said Wheeldon Jr.

Loturi has also featured for the Alberta provincial team at various age groups, as well as the Alberta team that competed at the 2017 Canada Summer Games.

After Loturi was invited to Cavalry FC’s prospects camp in February, Wheeldon Jr. said he impressed the coaching staff. That in turn led to further training opportunities with the first team, where Loturi continued to hold his own against grown men and established professionals.

Considering a huge part of the CPL is to develop young Canadian players and provide them with their first professional opportunities, Wheeldon Jr. said players like Loturi validate the league’s founding.

“Our job with this league and this [club] is to bring through young players,” Wheeldon Jr. said. “If we get him some first division games, it’s no different than what Ajax or the Sporting Lisbons of this world are doing. They’re getting young players and moving them forward.

“Victor could be that player… where he goes on to do very well for this city and this country.”

Loturi is Cavalry FC’s second U21 signing, following Malyk Hamilton. According to CPL rules, every club has to sign a minimum of three U21 players, who must collectively play at least 1,000 minutes over the course of the season.

Cavalry’s third U21 player will be revealed April 24, according to Wheeldon Jr. He added the spot will go to one of Cavalry’s USPORTS draft picks, meaning it will be either Easton Ongaro or Gabriel Bitar. (The team’s third draft pick, Joel Waterman, has already signed a contract).

Loturi, who is still just a Grade 12 student at St. Francis High School, said he was immensely proud to sign his first pro contract.

Despite the age difference between him and some of his teammates, Loturi, who took part in the team’s recent preseason trip to the Dominican Republic, said he feels comfortable playing with Cavalry.

“I’m comfortable, I just have to keep my head on a swivel,” he said. “I have to watch out for tackles because they’re way bigger than me, so I have to be smarter.

“I think I’m a smart guy, a quick player who plays one touch, two touch.”