Cavalry FC’s first ever game in the Canadian Championship was a positive one May 15, with the Calgary side downing Pacific FC 2-0 at Westhills Stadium in Langford.

Considering it was Cavalry’s fourth game in 12 days, it was no surprise to see a largely different lineup than the team’s first three games in the CPL. Cavalry’s starting 11 against Pacific included four debutants, including goalkeeper Niko Giantsopoulos, right back Malyk Hamilton, central midfielder Mauro Eustaquio, and left winger Carlos Patino.

Nico Pasquotti (pictured below) – who came to Cavalry’s rescue with a last-gasp goal to win the team’s previous match in the CPL against Forge FC on May 12 – got his first start of the season, as did attacking midfielder Oliver Minatel. Rather than the 3-5-2 or 3-4-3 formation we’ve seen in earlier games, head coach/general manager Tommy Wheeldon Jr. opted for his troops to line up in a 4-3-3.

While Pacific started the match on the front foot, it was Cavalry who struck first. Nine minutes in, a long throw-in from Pasquotti was redirected by centre back Dominick Zator over the hands of Pacific FC goalkeeper Nolan Wirth. The goal marked Zator’s second of the season, after he scored the winner against York 9 FC with a similar header on May 4.

It was also the second time we’ve seen a long throw from Pasquotti lead to a goal for Cavalry this season – his first one led to the direct free kick that Jose Escalante scored at the end of the team’s second CPL match, against Valour FC on May 8.

It’s been a useful weapon for the Cavs, and one that would show up again repeatedly throughout the first half, as Pasquotti would fire four or five of those long-bombs into Pacific’s 18-yard-box from the right touch line. 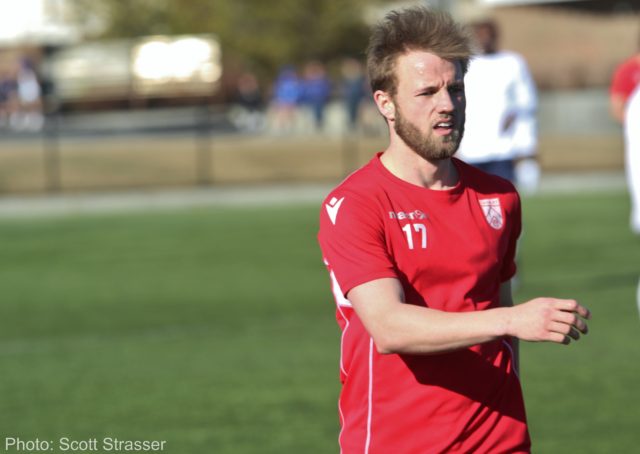 Six minutes after Cavalry took the lead, Pasquotti proved pivotal yet again, but this time it was with his feet. The Lethbridge native swung in an inch-perfect cross that Minatel met with a diving header at the back post. The ball soared past Wirth’s finger tips and into the bottom left corner of the Pacific goal, bringing the score to 2-0.

Unfortunately for Minatel, the goal would be one of his last contributions of the match, as the Brazilian had to be taken off shortly afterwards with what appears to be a hamstring injury.

Coming on for the injured Minatel was 17-year-old Victor Loturi, marking his Cavalry debut six days before his 18th birthday. The St. Francis High School senior slotted in confidently in his first professional match, showing some smart passing and an ability to play quick, one-touch football.

Down 2-0, Pacific FC still had a few chances to score in the first half, mainly from set-plays. Their closest effort came when Giantsopoulos was forced into a save off a 30th-minute corner kick that Marcus Haber headed goal-wards.

The last chance of the half fell to Zator, who once again combined with a header off a long throw from Pasquotti. This time, however, Wirth managed to make a brilliant reaction save to keep the hosts from going down 3-0 before the break.

Cavalry’s offensive pressure continued in the opening minutes of the second half. An early scoring opportunity fell in the 51st minute to Julian Buescher, whose left-footed strike clipped the top of Pacific’s crossbar. It seemed the visitors were set to continue terrorizing a Pacific back line that has weakened in the absence of centre back Hendrik Starostzik.

But little else happened in the second 45 minutes at Westhills Stadium, as the rain pelted down on the crowd of about 2,300 fans.

Pacific FC did make a few pushes into Cavalry’s half, but their scoring chances were limited to a handful of long-distance strikes that went high or wide of Cavalry’s goal. Tactically, the home team seemed eager to play long-balls for Haber to hold up with his back to goal, or flick on for a winger to chase, but neither strategy bore any successful results.

In the end, Cavalry held on for a comfortable two-goal victory in their Voyageurs Cup debut – a lead they will happily take into the second leg at Spruce Meadows next week.

Before that, however, the Cavs will have an important CPL fixture to focus on May 18 against FC Edmonton. The first official “Al Classico” will kick off at 4 p.m. MST at Spruce Meadows.

For Pacific FC, the defeat to Cavalry continues a frustrating recent run of form – Michael Silberbauer’s young Langford-based side have lost three of their last four games, and haven’t scored in the last three. Pacific’s only win thus far this season came in their April 28 CPL opener, a 1-0 triumph over HFX Wanderers.