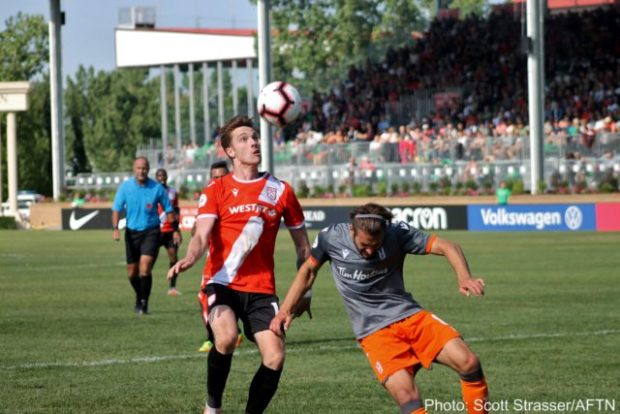 Well, it had to happen eventually.

After an 11-game unbeaten run in the Canadian Premier League and Voyageurs Cup, Cavalry FC tasted defeat for the first time in their inaugural season on June 22, courtesy of a 1-0 loss to Forge FC at Spruce Meadows.

In what was already the fourth meeting between the CPL’s two leading teams this season, Forge finally got the better of Cavalry, after having lost twice and drawn once against the league-leaders in the squad’s previous three contests.

Despite the blemish on their CPL record (now 7-1-0), Cavalry head coach and general manager Tommy Wheeldon Jr. said he expects his players to respond well to their first setback.

“We talked at the start of the season, even after the first couple of games, that one game doesn’t define us,” he said.

“I have full faith in these guys. They’re a resilient group and we’ve shown that over the course of the season so far. We have great bounce-back ability, so I have no qualms or concerns.”

Mathematically, a draw or win against Forge would have clinched the CPL’s 2019 spring season title for Cavalry. As it now stands Cavalry have a two-point lead over Forge, with a game in hand. The Calgary side can secure the title by collecting at least two points from their final two games, against York9 FC and Pacific FC.

One point (or no points) might even be enough for Cavalry to clinch it, depending how Forge fare against FC Edmonton in their final game on June 26. The only scenario in which Forge would win the spring title over Cavalry is if the Hamiltonians beat the Eddies on Wednesday, and Cavalry lose to both York9 and Pacific.

As convoluted as all that may sound, the point is the ball is still very much in Cavalry’s court, and we’ll have to wait until Wednesday night to know more. 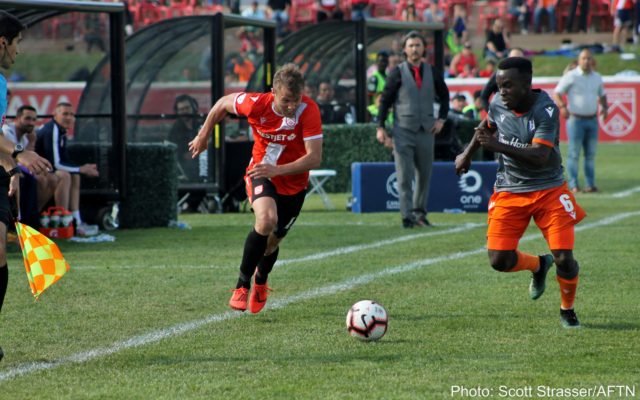 Nico Pasquotti chases down a ball against Forge’s Kwame Awuah

Wheeldon Jr. admitted it was a bit of a disappointment that Cavalry didn’t get to celebrate the spring league title at Spruce Meadows, as the Forge match was the team’s last home fixture of the spring season.

“Of course, you want to do it in front of your fans, but we’ve said it time and again, we don’t feel like this is the end of anything, but we feel it’s the start of something special,” he said. “We want to be here for the long haul – to be the club that everyone is talking about because we’re competing for championships.”

Forge’s goal came early into the game, when midfielder Kyle Bekker struck home Kwame Awuah’s low cut-back in just the fifth minute. Bekker – an easy pick for man of the match – expertly placed his left-footed half-volley in off the goal-post to silence the home fans.

“It was a big effort from the guys – everyone dug deep,” Bekker told One Soccer after the match. “It was a little ugly at times, but we got that first big goal and we saw it out; this is huge for our character, and now we’ve got to kick off from that.”

Forge’s captain added that securing the three points was the team’s sole focus coming into the away fixture against Cavalry.

“[Winning the spring season] is not really in our control,” he said. “All we can do is get the three points and put a little pressure on them. We all assume they’re probably going to get that one point in their next two games, but it would be nice if they didn’t.

“Still, this is huge for us as we go into the Fall season.” 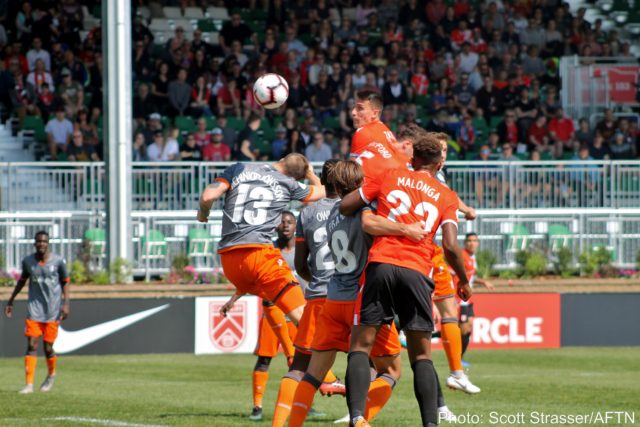 Dominick Zator came close to equalizing for Cavalry with this header in the ninth minute, but the ball struck the post.

Cavalry’s first solid scoring chance of the game came just four minutes after Forge’s goal. Following a short corner kick, winger Jose Escalante played in an in-swinging cross towards the penalty spot, and centre back Dominick Zator rose high to head the ball off the back post.

The home team came agonizingly close again just after the hour mark, when Nico Pasquotti’s mazy dribble into Forge’s 18-yard box ended with the Cavalry winger clipping a shot off the outside of the post.

“We had quite a few chances to put the ball away, and they didn’t have a lot going on, but their one goal,” said Cavalry centre back and captain Mason Trafford after the game. “I think we’re all feeling confident we’ll bounce back with a couple of wins in the next two games.”

Cavalry will have two more chances to book a spot in the 2019 CPL Championship series, both on the road. The Cavs will first take on York9 FC on June 26, before facing Pacific FC, in Langford, on Canada Day. 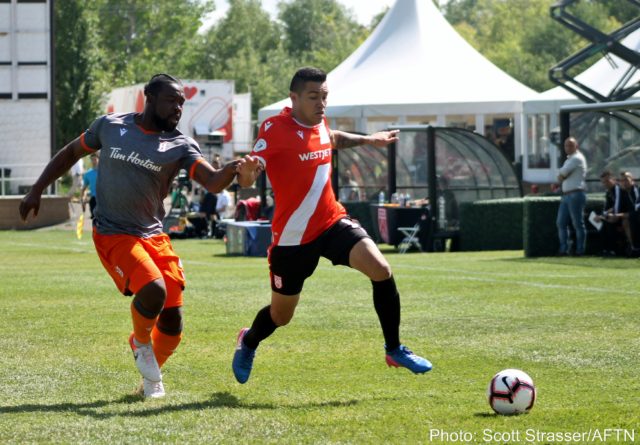 Jose Escalante in action for Cavalry.