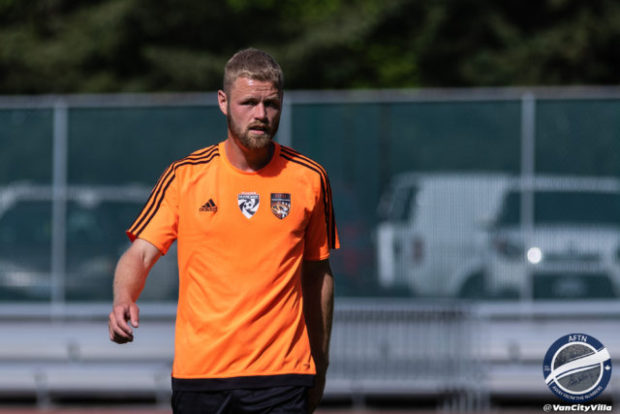 Five weeks into the 2019/20 Vancouver Metro Soccer League (VMSL) season and there’s already starting to be a clear split between those teams that will be challenging for the title come February, the ones hanging on to stay in touch, and those that will be battling it out to avoid the drop.

Rino’s Tigers continue to lead the way as one of three unbeaten sides after their first five matches, but the only one to still have a 100% record. After narrowly losing out on the championship last season, they’re the early ones to chase down, with West Van, BCT Rovers Hurricanes, and defending champs Croatia SC hot on their heels.

Rino’s were in action on Saturday afternoon and kept their third clean sheet of the season in their 4-0 defeat of ICSF Columbus at Trillium.

Two goals in a minute did the initial damage for the Tigers, with Tomi Fagbongbe firing Rino’s in front in the 28th minute and Ismael Longo making it two seconds later. Farivar Torabi made it three in the 55th minute, hitting his fourth of the season, and Yuto Kimura rounded off the scoring three minutes past the hour mark.

You can see highlights from the Tigers win below:

That victory kept Rino’s narrow two point lead intact, but West Van and BCT Rovers Hurricanes stayed right behind them with a couple of big wins themselves.

Hurricanes got the business done on Friday night with a dominant 4-1 win over the struggling Coquitlam Metro Ford Wolves at Newton Athletic Park thanks to a Nick Soolsma hat-trick.

Soolsma (main picture) got his first goal of the season 10 minutes in, adding a second five minutes before half time. Shaihak Sundrani made it three for the Surrey side in the 70th minute before Carlo Basso grabbed his first goal of the new campaign for Metro Ford nine minutes later to reduce the deficit back to two.

Any thoughts of a dramatic comeback for the Wolves were quickly thrown away as Soolsma wrapped up his hat-trick less than a minute later to round off the scoring and give the Hurricanes a 4-1 victory and keeping Metro Ford rooted to the bottom of the table.

That win had temporarily taken the Hurricanes to the top of the table but they finished the weekend back in second spot, two points behind Rino’s Tigers and tied on 13 points with West Van FC.

The Amblesiders destroyed SFC Pegasus 5-0 in West Van on Saturday afternoon. Colin Phillips started the rout off quickly with a goal within the first minute, before Keith Jackson doubled the home side’s lead with 14 minutes gone. Michael Winter made it 3-0 in the 29th minute and that was how things stayed until half time.

Eoin McCormack became the fourth different scorer of the afternoon nine minutes in the second half, before Pegasus’ afternoon went from bad to worse with two sending offs in the last 10 minutes of the match, which included Chetan Jhooty. West Van capitalised on the two man advantage to go nap in the last minute thanks to a goal from Doug Joyce.

Those victories now set up this weekend’s ‘Match of the Week’ as West Van travel to Newton on Friday night to take on the Hurricanes. Kick off is 8.40pm on Field 2 and it should be a cracker.

While those three teams are starting to pull away from the pack a little bit, they still have to play each other and a few bad results here and there will see things change quickly. And waiting to pounce are Croatia SC, who sit fourth, five points off the top spot.

Last season’s champs saw off NVFC Norvan at Burnaby Lake on Friday night with a 2-1 victory. Farzad Ali and Mario Kovacevic got the goals for Croatia with Anthony Paiero scoring for Norvan.

The final match on Friday saw CCB LFC United get ready for this week’s nationals with a hard fought 2-2 draw with Burnaby Selects White Eagles at Newton. Rylan Sangha and Caleb Clarke were on the scoresheet for CCB. Golden Boot leader Vladyslav Matlash got his sixth of the season for the White Eagles, with Daniel Pervan getting the other for the Burnaby side, who finished the match with ten men after Vuk Erbez saw red.

Rounding off the weekend’s action was a high scoring clash between Guildford FC FASA and Club Inter EDC Burnaby at Burnaby Lake on Saturday evening. Inter were in rampant form to run out 7-2 winners.

Rizal Ganief hit a brace for Inter to take his tally to four for the season, with Gilly Kyne, Graham Smith, Liam Miller, Marco Visintin, and Tyler Rosenlund all grabbing a goal each. Othmane Kabbadj and Ramsey Alfantazi got the goals for FASA.

So after all of those results, the VMSL Premier Division standings look as follows after Week 5’s action. 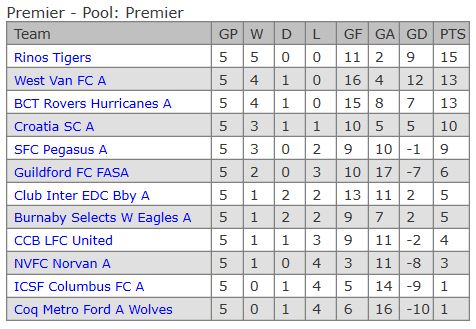 There’s some exciting match ups in store this week, with all games taking place on Friday night.