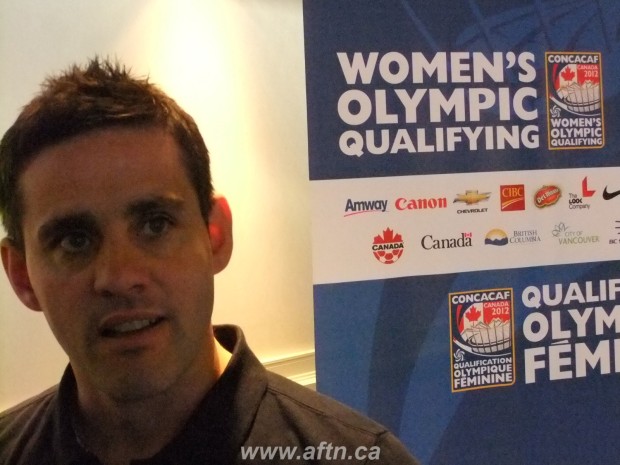 The Canadian National Women’s Team held a press conference in Vancouver today, ahead of the CONCACAF 2012 Olympic Qualifying tournament that begins on Thursday at BC Place.

Those in attendance were left in no doubt of two things: the girls are delighted to be playing a major tournament on home soil and everyone in the team has their eyes clearly focussed on the main prize, one of the two qualification spots for the 2012 Olympics in London.

Head coach John Herdman was in a buoyant mood and is already looking ahead to the tournament’s crunch game, the semi final on Friday January 27th. That is the game that will decide Canada’s ultimate fate, most probably against Mexico.

“We’re thinking the 27th, our semi final game, is going to be huge and we’re hoping that stadium is near full, cheering the team on and getting us over the line. Whatever happens, we’ll be throwing everything but the kitchen sink at the team that we play. We’re going to need every bit of passion and support from fans, media to help us over that line.

It’s going to be one hell of a game I imagine and we’ll be ready for it.”

By already looking beyond group opponents Haiti, Cuba and Costa Rica, some will feel that Herdman is dangerously jumping the gun, after the failings at last year’s World Cup in Germany. Personally I love that attitude and having taken New Zealand to two World Cups and the 2008 Olympics, he clearly knows how to get a team properly prepared.

Herdman is not underestimating any team in the tournament, but if Canada is expecting to clinch one of the qualification spots, then the semi finals should be a given. The group games really are just the hors d’oeuvres to the final four main course.

It’s not a dismissive, arrogant swagger. It’s the harsh reality of the situation and Herdman has his goals firmly set, knowing what has happened in the team’s recent past.

After crashing out in the first round of last year’s World Cup in Germany, the Canadian girls bounced back in some style just three months later, winning gold at the Pan-American Games in Mexico under new coach Herdman.

It wasn’t the happiest time when he took over the team in September, but he’s certainly turned it around:

“At the first camp there was a lot of soul searching done at that period. That was the first step, but the players were quite clear as to what needed to happen.

The Pan-Ams were a key test. Brazil in the final. We’ve been to finals before. We’ve been to big games. We’ve been to extra time and penalty shoot-outs, and we’ve always came out on the wrong side of the line. That game was absolutely crucial for them. It wasn’t about proving something to the public, it was more about them feeling connected again as a team and knowing we can play, we can perform, we can win big games.”

They certainly showed that in some style and with that new found gold medal confidence, and some demons possibly having been put to bed, 14 members of the victorious Pan Am side are in Vancouver looking to add some Olympic qualifying glory. The focus is clear:

“We’ve got an excited group. They’ve had their ups and downs and I think we’re on track. The spirit’s there, the excitement, the passion. We’re hoping the discipline out there on the pitch will come.

I’m hoping that the team can be in the right mental, physical and tactical state to take that game four on and in a better state that any other team that we play against in that one game.

The third goal is to win the event, but we won’t sacrifice and compromise qualifying for this Olympic Games.

Game four will be that game where not one ounce of Canadian will be left out on that pitch.”

As tournament hosts, Canada can either feel the hometown pressure or go out there and seize the advantage and the massive opportunity that it brings. There’s no doubt that the team are only thinking of the latter:

“Coming here, seeing the snow and being right outside the stadium has got us to where we need to be. The mindset’s right and people are excited and looking forward to the tournament.

We’ve got a number of players on this team that are getting on a bit. Some of those players have represented their country for 10, 12 years and never played a tournament here in Canada, so it’s quite a unique event for some people.

We’re certainly going to cherish every minute we get on that grass, to make sure that this is a lasting memory not only for the team, but for the people of Canada.”

Canadian football fans will be hoping for those memories, and with the games being shown coast to coast on Sportsnet, it’s a great showcase for the whole team.

There’s nothing worse than watching a major tournament, whether it be the World Cup or the Olympics, and your team not being there. As a Scot, I know that feeling only too well.

For Englishman Herdman, qualification has the added advantage of leading his Canadian team out on home soil. What would that mean for him?:

“I just love football, probably like yourself. Any team I’m leading, whether it’s my young lad’s under 7 team, or whether it’s this team, it’s just a great experience to be part of something. But I think my dream is to get a game against anybody at St James Park (Newcastle).

Going back to England, and the UK, and being able to just be part of a football culture. I think that was really cool in Germany at the World Cup. You’re in a real, solid football culture and I think coming here to BC Place it’s going to be really interesting to experience the soccer culture here.

So it’ll be a dream come true for me. Especially to lead a team that can go on and win a gold medal. This team could do that. With another six more months of hard work we could be in that space. So not only going, because I think if I’d stayed in New Zealand I’d have been going to an Olympic Games. Our qualification route was a lot more easier.

But it’s actually going with a team that can go and win that tournament and that’s what I’m hoping this team can do.”

We all do and the road to gold kicks off on Thursday evening with a group game against Haiti.

AFTN will be bringing you coverage from the tournament here and in the build up to the opening game, later this week we’ll let you know what Herdman and some of the players are hoping for from the Canadian fans, and in particular the Southsiders, who have taken their own supporters’ section for the tournament.