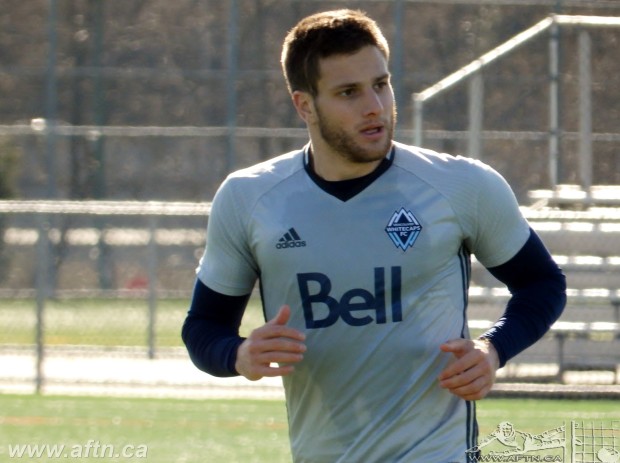 Goals. The bugbear of Vancouver Whitecaps in recent seasons.

It’s certainly not for the lack of creativity or chances created. What’s been missing at both MLS and USL level has been a prolific marksman that can bury those chances in the net. A player who a double digit goalscoring season is the minimum target he expects from himself, and most importantly, achieves.

Canadian Daniel Haber is confident he can be that player for WFC2 this season and hopes to earn himself a MLS contract as a result.

Haber has spent the last three years playing his football over in Israel and Cyprus, but the 23-year-old striker felt the time was right to head back home to Canada, with the ultimate aim of securing a MLS deal his motivation.

“I had a talk with Alan [Koch] when I was overseas,” Haber told AFTN about how his move to Vancouver came about. “He just explained to me what the program was like and what the opportunities were like here. He made it sound very attractive in terms of, in football, nothing’s guaranteed.

“I have a clear goal in mind and that’s to go up to the MLS. I felt like this was a good opportunity to do so and succeed. I’d heard nothing but good things about the Whitecaps organisation also.”

The Whitecaps certainly weren’t the worst in terms of goalscoring in their inaugural USL season. Their biggest problems came at the other end of the pitch. But much like Carl Robinson with the first team, head coach Alan Koch wanted to make some additions to find some more consistency and regularity in the strikers’ department.

Koch hopes to have found that with Haber and is delighted to have him in his squad for the season.

“My job with WFC2 is to try and get players from our group to the first team,” Koch told AFTN. “So we brought him in to work with our group and hopefully get to the first team. He’s still young. He’s a Canadian guy that been in Europe for a couple of years. He’s not an old player, by any means, but he’s had some good experiences.

“He maybe felt like he was starting to hit a little bit of a brick wall over there and he wanted to come back to North America. We brought him back and he’s done very well for us so far.”

Haber banged in a team-leading six goals in WFC2’s unbeaten preseason, and particularly impressed in the win over Sounders 2. He’s now looking to bring that form to the USL season and although he didn’t get on the scoresheet, he looked sharp, in the Whitecaps’ opening day win over OC Blues last Saturday, and the striker feels right at home in Vancouver already.

“I’m settling in well,” Haber told us. “I felt pretty good in the beginning, I was training with the first team a little bit, then I had a small injury in Arizona, which was a bit of a setback and disappointing, but it only kept me out for about a week. When I came back to Vancouver I re-joined the USL team.

“It’s been good. I feel like we’ve made progress as a team and individually I’m feeling more comfortable in the style they want us to play.” 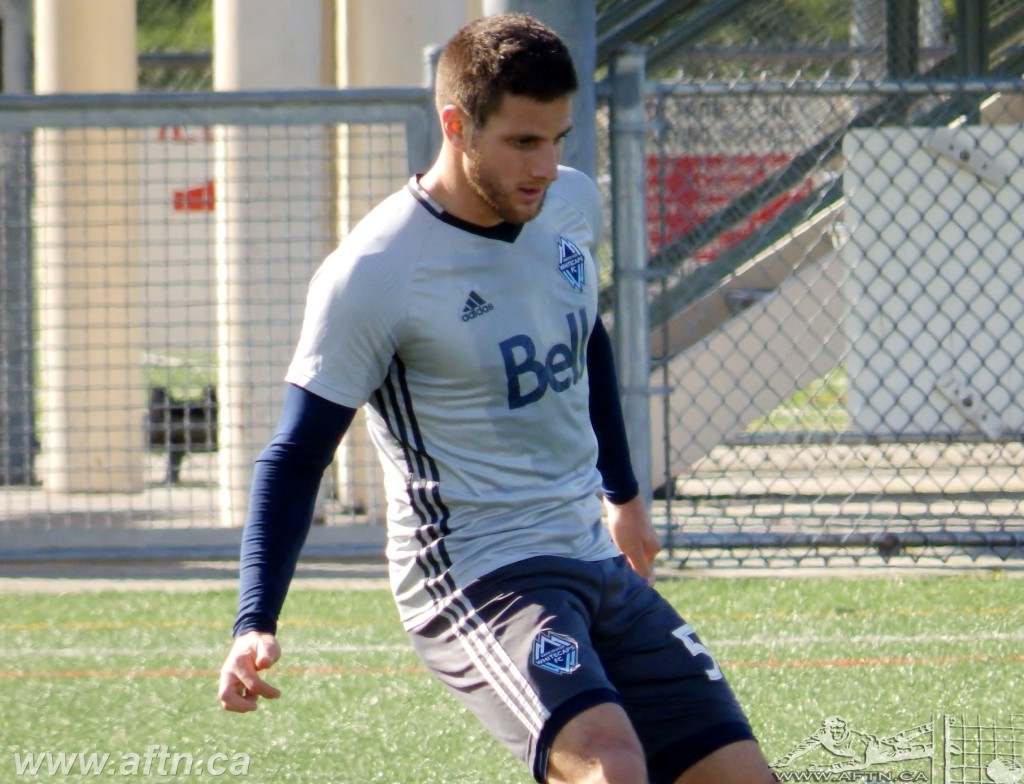 Haber’s journey to Vancouver has been an interesting one.

His youth career was interrupted aged 12, when he had to undergo surgery for a life threatening brain infection caused by a sinus problem. It was an operation that saw a cyst and part of his skull removed, and a skull cap and titanium plates placed in. He still bears the signs and scars of the operation today, but it certainly didn’t derail his footballing dreams.

After missing a few months, he returned to playing and won three straight Ontario Provincial Championships between 2008 and 2010, before the Toronto-born Haber headed off to continue his football at prestigious Ivy-League school, Cornell University.

A Freshman year saw him score just once in 17 games, before finding his feet during his Sophomore season where he recorded 9 goals and 4 assists from 16 matches, where only three of them were starts.

It was to be Haber’s Junior season that really saw him explode onto the scene. His 18 goals and seven assists from 17 games saw him gain national attention, leading the NCAA in goals per game and points per game. He was named Ivy League player of the year and was a semi-finalist for the Mac-Hermann Trophy, the college game’s biggest individual honour.

Those performances convinced Haber that he had what it takes to be a pro and he took the decision to come out of college early. But instead of chancing his luck in the MLS draft, Haber headed overseas to Israeli side Maccabi Haifa, which may seem like an unusual avenue but it was an opportunity which Haber was happy to grab with both hands.

“Honestly, I hadn’t really been contacted about MLS prior to that season,” Haber told us. “When I had, what I felt like, was a pretty good season, I had the opportunity to go for a trial with the team. I spoke it over with my parents and some family at home and I just felt it was the right move for me at the time.

“Life’s an adventure. You don’t know what path it’s going to take. You can only do what you feel is right at the time.”

Haber signed for Premier league side Maccabi Haifa in January 2013, but found playing time limited. He made just four appearances for the Israeli side, scoring two goals, before heading to Cyprus that summer and joining Apollon Limassol of the Cypriot First Division. Haber spent the 2013/14 season with Limassol, scoring three goals in 18 appearances, before being loaned out to Ayia Napa for the 2014/15 season, where he scored three goals in 30 appearances for the newly promoted side.

Apollon didn’t renew Haber’s contract for the current 2015/16 season and the striker found himself heading back to Israel and to second tier Liga Leumit side Hapoel Nir Ramat HaSharon. He’d hit seven goals in his 22 appearances for them last year before the ‘Caps came calling in January.

Quite the adventure, and Haber made the most of it, exploring as much of Israel and Cyprus as he could in the process.

“Oh yeah,” Haber enthused. “I was able to see the countries. It’s quite nice there. A little island, Cyprus, and Israel’s quite beautiful.”

But talk of Israel and thoughts eventually turn to the years of turmoil in the Middle East. Years of news reports would have you believe that playing your football there and living in the country may be full of everyday risks with the turmoil, but Haber says that’s far from being the case.

But it wasn’t just an adventure at club level for Haber, it also provided him with the opportunity to pull on the red and white for Canada, earning five caps in 2013 after making his debut as a second half sub in the 1-0 win over Costa Rica in May of that year.

It was a chance that he never thought he’d get but he’s delighted that he did.

“It was a huge honour,” Haber admits. “Each time that I was there, each camp that I was invited to, I was surprised and honestly honoured. I never got a chance to play for the youth national teams, so to be recognised, especially in the senior group, not just to wear the colours but to play with the players and to meet the players who are really considered, and well regarded, as the best players in the country, it was a huge honour and I feel really lucky and proud to be part of it.” 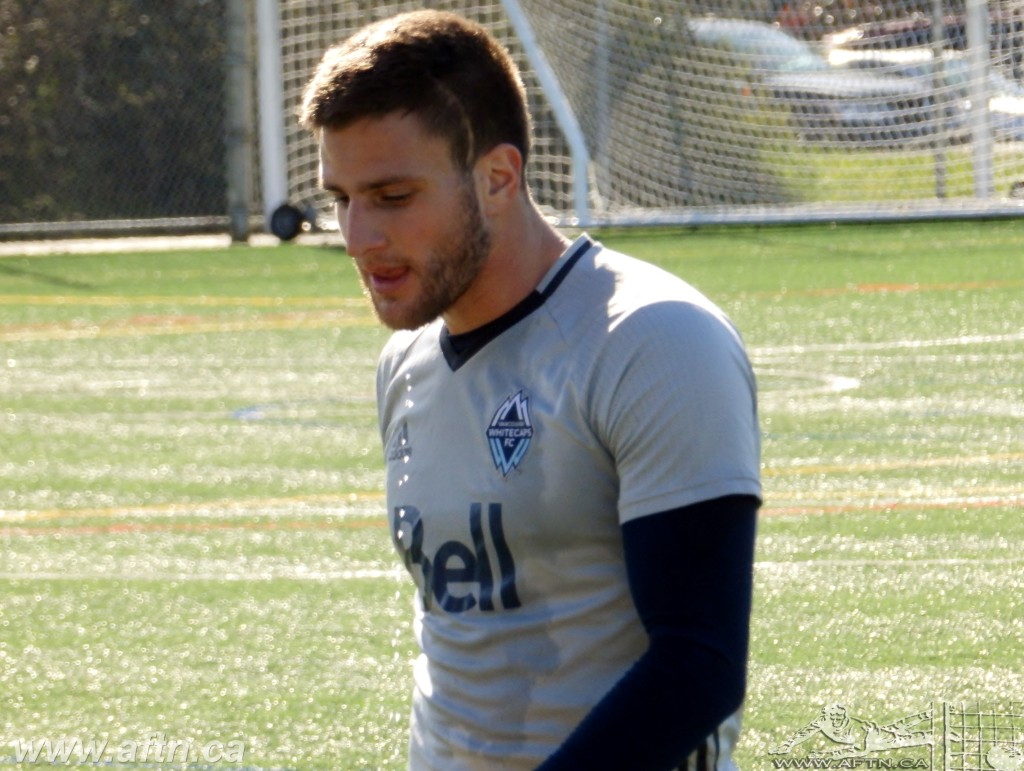 Haber has now swapped the Mediterranean sun for the Vancouver rain (and sun, we probably shouldn’t forget that on a day like this!). For a player with no previous professional experience playing in North America, it’s hard to say how much of an adjustment he needs to make. Football is football after all. It’s a simple game, no matter how hard MLS rules try not to make it so.

He admits to not knowing too much about the USL before making the move, but he’s been doing his research since and can’t wait to get his career here off to a good start. But most of all, he’s delighted to be back in Canada and in an environment that will hopefully see him thrive and move up to the top level of the game here.

“I actually don’t know too much about the league,” Haber was honest enough to admit. “From what I understand, and from the research that I’ve been doing, it sounds like it’s been growing a lot each year. There’s more and more teams.

“I’m excited to be back, just to be in an environment where it seems like all that we care about in this club, and the league in general I guess, is that it’s a clear path forward. They want to develop their players.

“They want the players to have the right attitude, the right professionalism and just to try and improve and just see where you can go. I think it’s great for North America that we have this league that players can make enough money to live and try and further their careers.”

In theory of course. We’ve seen that before with Whitecaps teams! But the signs are there that this is a team that could do some damage in the USL this season.

Koch agrees and likes what Haber offers the team. He also likes the different make up that all the attackers bring. How to fit them all in is the big question for Koch to ponder now.

“It depends on how we play,” Koch told us. “If we play with one [striker], it’s tough. If you play with two, it gives you more options to bring players in. Daniel’s also versatile. He can play out wide, so he can play there too.

“[The strikers] are all different. If you compare all of them you’ve got quick players, you’ve got big players, you’ve small players, you’ve got skill players. I would say he’s an intelligent forward. He makes great runs and he’s an excellent finisher too. A player like him, if he gets hot and he gets confident, the sky’s the limit. The more goals he scores for us at WFC2, the more chance he has of moving up to the first team.”

As Haber said, that is his clear goal, and the clear pathway that the Whitecaps offer from Residency to USL to MLS, and Carl Robinson’s proven desire to give young players their chance, were two of the driving factors that made the striker want to come to Vancouver.

“Yeah, absolutely,” Haber said. “And it definitely helps to be back in Canada. Vancouver’s a great city, and I’ve heard nothing but great things about Robbo as a coach and the organisation and the way that they really value the development of players and they want to bring their own players up. They want to see the success of young Canadian players.”

That they do. And Daniel Haber wants to be the latest to benefit from that.