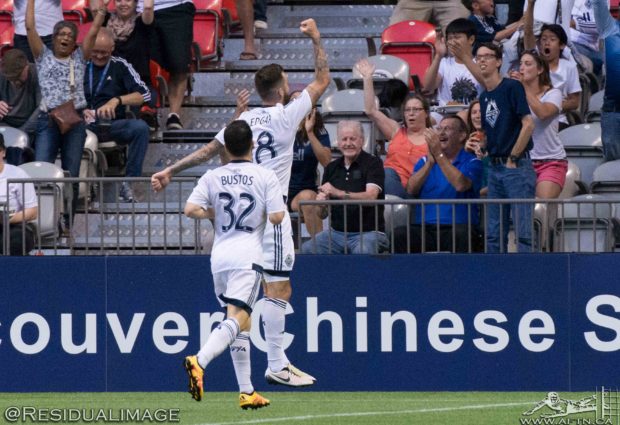 David Edgar brings a wealth of experience to Vancouver Whitecaps defence. After moving to England at the age of 14, Edgar came through Newcastle United’s youth system and heads back to Canada with an 11 season career in the English leagues under his belt.

It’s much-needed experience for a struggling Whitecaps defence that is shipping goals all over the place, with a constant slew of individual errors. That’s one of the reasons Carl Robinson was so keen to add him to his squad this past transfer window.

Edgar’s signing was announced on July 11th, but having come off a season with English League One side Sheffield United, the Canadian defender was still in preseason shape and not up to the fitness levels required to hit the ground running in MLS.

He made his debut in a Whitecaps shirt in the friendly against Premier League side Crystal Palace the following week, playing 61 minutes and scoring the opening goal. A nice start, and it was followed up with a stint for WFC2 in the win over Sacramento Republic a few days later.

After making his competitive debut for the ‘Caps last week in the Champions League win against Central FC in Trinidad, Edgar finally saw his first MLS minutes this past weekend, starting in the 2-0 loss in Colorado. He struggled, looked off the pace and it was a debut to forget, although he certainly wasn’t alone in putting in a poor performance.

“Disappointing to lose and concede two on my debut,” Edgar admitted. “I got 90 minutes in Trinidad too, which was nice and it was comfortable. We got the three points there. The more I train and the more fitness I do, I’m feeling sharper.”

But sharp enough yet for a midseason MLS campaign? Robinson felt the timing was right to bring him in to the first team mix but admitted things didn’t really go as he’d hoped with last weekend’s freshening up of the backline.

“Bringing David Edgar in on Saturday was based on leadership, communication,” ‘Caps coach Carl Robinson told reporters at training on Tuesday. “He played excellently away on Tuesday in Trinidad and I thought it was the right thing to do. It obviously wasn’t because we lost the game 2-0. But that’s no reflection on David or Tim at right back, it’s collectively we’ve got to cut out mistakes.”

Being thrown in for a debut in the humidity and altitude of Colorado wasn’t ideal and we’ll get a better idea of whether Edgar can help steady the Whitecaps ship in this Friday’s crucial home game against San Jose, where he is expected to start again alongside Kendall Waston.

“It was the same for both teams,” Edgar said of the conditions he faced last weekend. “I didn’t feel it too much. I felt quite comfortable fitness-wise. It had been a long week, but no excuses, we didn’t put in the performance we needed to.”

With only ten games of the regular season remaining, Edgar doesn’t have too much time to get up to speed. The Whitecaps need him ready now, but Robinson admitted he’s prepared to use a risk vs reward attitude when it comes to playing him, with what he can offer a struggling defence overriding concerns over his fitness levels.

“I think David’s an exceptional player,” Robinson said of Edgar. “When he’s fit. He needs to keep continuing to work on his fitness. Sometimes it’s needs must. Christian’s [Dean] been struggling with injuries this year and we’ve had one or two with loss of form in the backline. I wanted to just shock some players, so I brought David in.

Edgar’s had 90 minutes of playing and several weeks of watching to get up to speed in another sense, that of what the play is like in MLS. This is the 29-year-old’s first ever time spent in the domestic professional game, and after a career spent in the English leagues he admits that he’s noticed a surprising difference with what he’s seen so far.

“It’s a different type of game,” Edgar revealed. “It’s actually a lot more technical than in the English leagues I played in, in terms of overall players and athleticism. So yeah, it is different. I’m adapting to it, but it’s something I need to deal with quickly.”

Coming back home and to MLS at this stage of his career may have surprised some looking in. After spells with Newcastle United, Burnley, Swansea City and Birmingham City, he’s spent the last two seasons out on loan, first with Huddersfield Town and then most recently with Sheffield United.

Major League Soccer was always in his plans for later in his career, and with the ‘Caps interest being strong, he felt that this was now the ideal opportunity to come back across the Atlantic.

“Speaking to the manager and hearing his philosophy really helped me sway my decision,” Edgar said. “But I’ve been thinking about it for a long time. It’s always been in the back of my mind. When this came up, it was almost too good to turn down. I’m 29 now, it’s scary, and I’m not getting younger. This league’s only growing, and you can see it getting bigger worldwide. It’s something I’ve always wanted to be a part of.”

Robinson revealed a little bit more as to how the transfer came about, with Edgar being on his wanted list for a while now.

“I spoke to David maybe at the start of the year,” Robinson said. “I’ve tracked David for a number of months really. There was an opportunity last year before he went on loan. I explored the conversation with him, but there was nothing real concrete in it at the time and David was earning a lot of money back in England.

“So I waited until his contract had run out and I followed that up with a conversation, but from the moment I spoke to him, I told him I wanted him. I think you’ll find with me, is what I say is what I’ll do. I told him I’d get him and I did. We’re delighted to have him on board.” 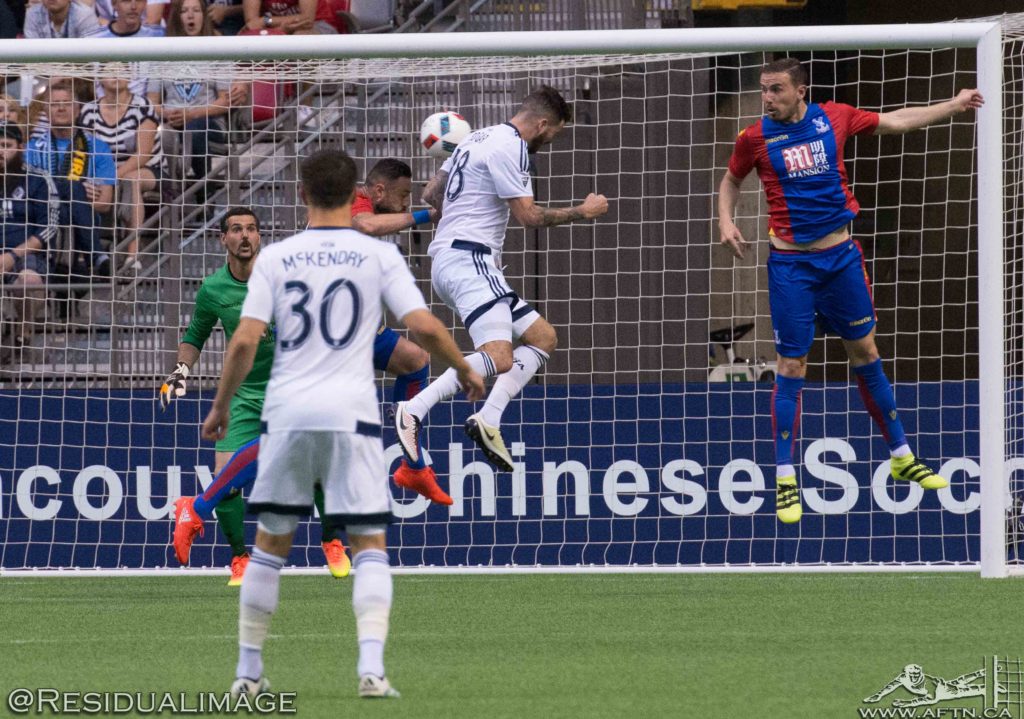 Edgar comes in to what has started to become an ever-changing back four.

Jordan Harvey’s injury has seen Marcel de Jong come in at left back the last two games, and he’s struggled at times. Then the right back position is just a complete mess right now. The two players battling it out at the start of the season, Fraser Aird and Jordan Smith, have both had mixed seasons. Both are currently healthy and good to go, only to be overlooked for two centre backs, Cole Seiler and Tim Parker, playing makeshift in the position, also to mixed results. That in itself is very telling of the faith Robinson has in his right backs.

Parker has arguably been the best Whitecaps central defender this season. Not difficult when you look at the form and suspensions of Kendall Waston, the up and down form of Pa Modou Kah in the limited minutes he’s played, and defensive midfielder Andrew Jacobson’s stints in the centre of the defence, which have been solid, but he’s not a centre back.

Parker isn’t having the best season himself, so help was needed and Robinson sees Edgar as that knight in shining armour. It’s never easy coming in to a changing line-up. What Vancouver need now is some stability and settled line-up for the season run-in.

“I think that’s key,” Edgar admitted. “Any manager will tell you he wants a settled back four, if not a settled 11. I was glad to get my opportunity. Disappointed with the result, but we can only move on to the next game now and if I get my chance to play, make sure we get the clean sheet and move on from there and get stability.”

Vancouver’s defence led the league last season with only 36 goals conceded. An average of 1.06 goals per game. This year they’re already three goals above that total with ten games left, the second most goals against in all of MLS and an average of 1.63 goals conceded per game.

Edgar knows an instant improvement is needed from the Whitecaps backline, and despite the defensive struggles so far this season, he’s confident it’s not beyond repair.

“I don’t think it’s anything major,” Edgar said. “We conceded at two bad times on Saturday and that was tough. You go into half time at 0-0 and it’s okay, after not playing too well. But we concede right before half time and then we start to get back into the game and concede again. It’s just things like that that are going against us at the minute. It’s just about putting things right and putting in a solid 90 minutes.”

But therein lies the tale of the ‘Caps season. Poor goals given up and lots of individual errors. It’s been an issue all year but hasn’t always been so costly when the team was at least scoring. The last three games they’ve been blanked at the other end and soon as the ‘Caps fall behind right now, there seems no feeling amongst either the fans or the players that they’re going to turn things around and get back in to the match.

All of which must put extra pressure on the defence, knowing that if they don’t keep a clean sheet, there’s little chance of even getting a point in some of these places.

“As a defender and as a back four or back five, you have that pressure non stop anyway,” Edgar added. “You don’t want to concede and it’s up to the players in front of you to create. And if we can pitch in with goals from set pieces and stuff, then all the better. But you take that pride in defending and getting that clean sheet.”

With the West so tight, and the ‘Caps now sitting outwith the playoff places, it sets up something of a frantic finish for Vancouver. Eight of their ten remaining matches are against Western opposition, with six of them against teams that will realistically be pushing for the 5th and 6th spots come October.

“That old cliché, you take one game at a time, and that’s what we’re going to do,” Edgar said. “It’s what the manager is drumming in to us. It’s all about just getting the points on the board and after a long away trip, it’s nice to come home in front of our home fans.”

So are the players feeling the urgency setting in and starting to panic as much as some of the fans are?

“No, no panic whatsoever,” Edgar added. “We need to start putting performances together, obviously that’s key. From what I’ve seen and what I’ve been involved in, it’s coming. It’s just about staying patient, and like I say, taking one game at a time.”