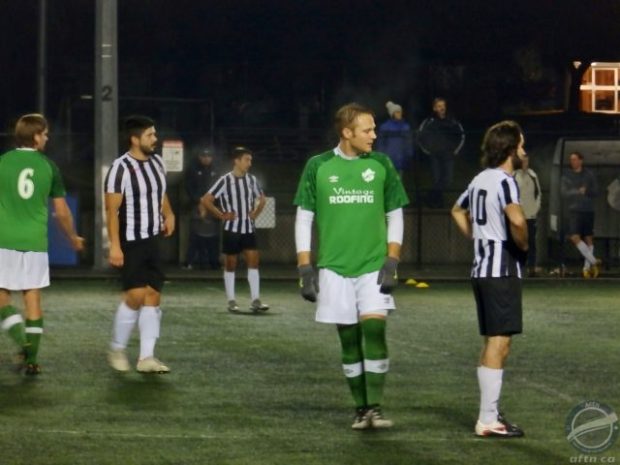 Despite the heavy rain in the build up, the top flight of Vancouver Island soccer had all its games played last weekend – with everyone thankful for turf and the rain holding off for much of Friday evening.

Match week 6 had a clear Saturday so many could enjoy the final Pacific FC game of the year, and like that game, the Division 1 results did not disappoint..

It was a week with some surprises, some strong defensive efforts, and some teams making moves in the standings. Here’s how it all played out. 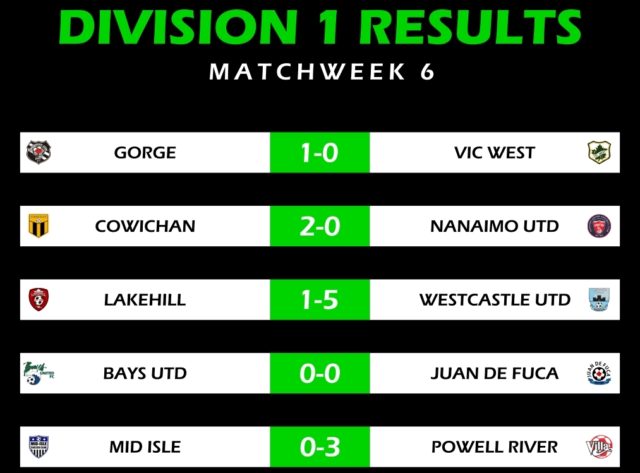 Cowichan were the big movers. They blanked Nanaimo United in Duncan 2-0 thanks to a double from Logan Kits, a victory that moved them up to third and to within three points of top spot as they look to make it six straight VISL championships. Providing the clean sheet for Cowichan was Keeper Darian Achurch.

The slated Game Of The Week was a shocker and produced the biggest scoreline of the weekend as Westcastle United trounced Lakehill FC by a score of 5-1.

This was a big game that saw Westcastle jump up the standings, and also putting a skid of Lakehill’s impressive run of late. Keenen Colley hit a hat-trick fo the visitors, unsurprisingly winning the 1550’s Man of the Match award in the process, with Goteh Ntignee and Boland Lekeaka grabbing the other Westcastle goals. The loan goal scorer for Lakehill was Paulo Dait.

Another shock on the weekend saw league leaders Bays Utd drop two points at home to relegation threatened Juan de Fuca Allflows following a scoreless draw in Oak Bay. With both teams at opposite ends of the table, this was not expected by any means, although Bays keep their lead at the top after Lakehill’s loss.

Earning the shutout for JDF was Blake Ridley, and for Bays Utd it was Ethan May.

The first match on Friday night saw Gorge FC play host to Vic West at Hampton Park and AFTN was there in attendance to take in our first ever VISL game. 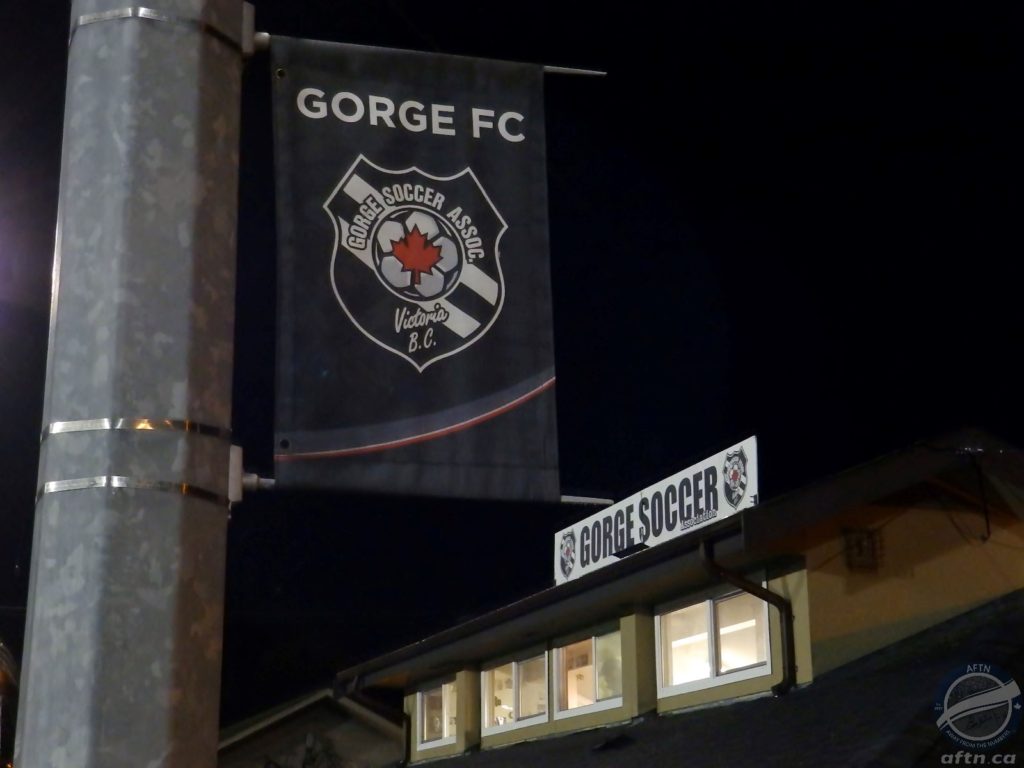 A feisty first half threatened to boil over at times, with passions running high and refereeing decisions not going down well with either side. Vic West thought they’d opened the scoring just past the half hour mark, only for the linesman’s flag to rule it out in another contentious decision. Minutes later Gorge suffered the same fate and both teams headed in to the break all square and with all to play for.

Vic West dominated the second half chances, launching wave after wave of attacks but lacking that killer final delivery and finish. Gorge had the possession and a couple of chances of their own, but the visitor’s counter was looking dangerous every time they tore forward.

As the game entered stoppage time it looked like ending as a goalless affair, a result which would have helped neither side in the standings. But then after a spell of late pressure, recent signing Martin Trapero lashed the ball home for Gorge FC with the last real kick of the game to give the home side a dramatic last ditch victory.

You can see our highlights video below, but be warned, the combination of our crap camera, the lighting, and the weather conditions make for a video of horrible quality and a lot of blurryness, which also sadly comes into effect at the worse possible time for the goal! Still, better than nothing – just!

The last game of the weekend featured a couple of teams at the bottom and the result changed the outlook of the division.

Newly promoted Powell River Villa defeated Mid Isle by the score of 3-0 after an excellent away performance. Powell River had goals from Kye Taylor, Jake Kenmuir, and a Mid Isle own goal, while posting the clean sheet for Powell River was Matt Liknes.

So a lot of interesting results this past week with a couple of teams marching up the standings to tighten things up some, and the bottom takes a big turn. After all the action, here is what the VISL Division 1 standings look like. 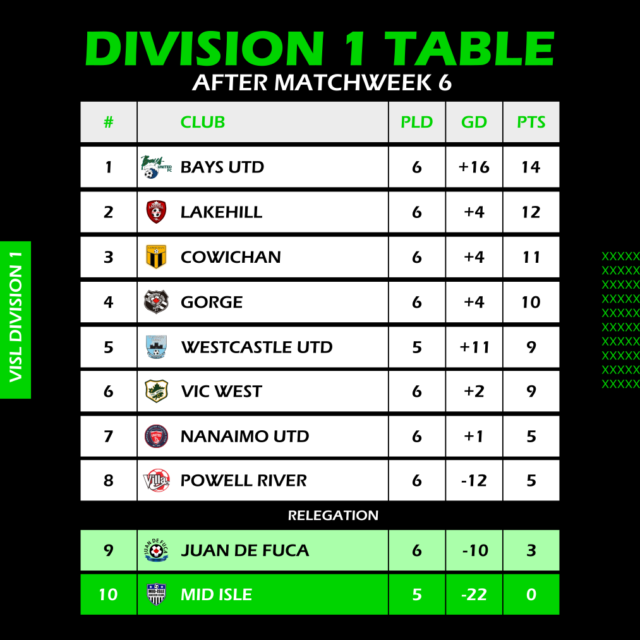 There was also movement in the race for the VISL Golden Boot and there is a new man sharing first place on the leader board after Patrick Nelson’s blank week for Bays. 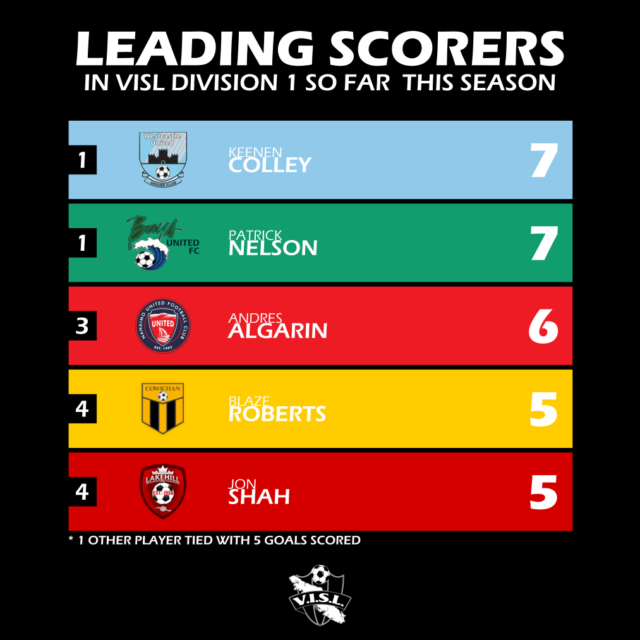 Week 6 was an interesting one – just another reason why you play the games. You just never know what can happen on any given Friday on the Island!

The next action is fast approaching, and the top flight in Division 1 has a busy weekend in store. Will we be as shocked as we were last weekend?

There’s just the one game on Friday this weekend, and it could be a beauty as Westcastle are hosting Vic West at Westhills Stadium. The New Kids on the Block are hoping the Pacific FC vibe will rub off and that they can extend Vic West’s losing streak.

The Westcastle squad is riding a hot streak of their own, while Vic West are still licking their wounds from that very late goal given up last week that led to their loss to Gorge.

Saturday is a busy one as Powell River starts the day by hosting Gorge at Timberlane. They are fresh off their first win, and it will take a special effort to beat the undefeated Gorge team who are coming off a win after being part of so many draws. A big three points are on the line this weekend.

Juan de Fuca Allflows will be hosting defending champs Cowichan and a winning football playoff run by the Rebels has meant a venue change. The game will be on JDF grass by the Q Centre, Saturday at 6 pm as JDF will look to build from their draw against division leaders Bays, while Cowichan are coming off their big win at home to Nanaimo.

Mid Isle will look to change their ways as they host Lakehill at Ladysmith turf on Saturday. The Mid islanders will be in tough as Lakehill always seem to bounce back after a bad loss. Both teams need to after losses last weekend, with Lakehill coming off the drubbing from Westcastle, while Mid Isle coming off their basement battle loss to Powell River.

The final game on Saturday will be up at Merle Logan Turf with Nanaimo will be hosting division leaders Bays Utd in what could be a cracker. Both teams are coming off less than stellar matches last week, so will try to be on the right side of the result.

Here’s the full slate of matches in the division. 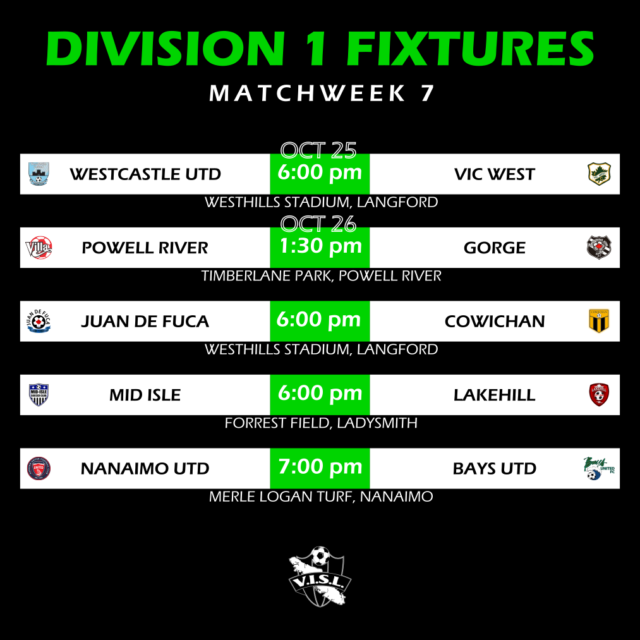 There are many story lines to watch this weekend, but most interesting will be the movement of teams in the top half of the division.

Hopefully you can catch a game on the island this weekend, but the local soccer community will also celebrate at the Greater Victoria Sports Hall of Fame event at Bear Mountain on Saturday night.

The event is always a good one, and it features many local soccer legends. The Hall of Fame has recognized local soccer greats like George Pakos, Ike MacKay, Simon Keith, Vic West Soccer Club and more.

For this years list of inductees, and the option to get a last minute ticket, visit the Hall of Fame website.

And don’t forget you can get all your latest VISL news, results, fixtures, and standings at VISL.org.