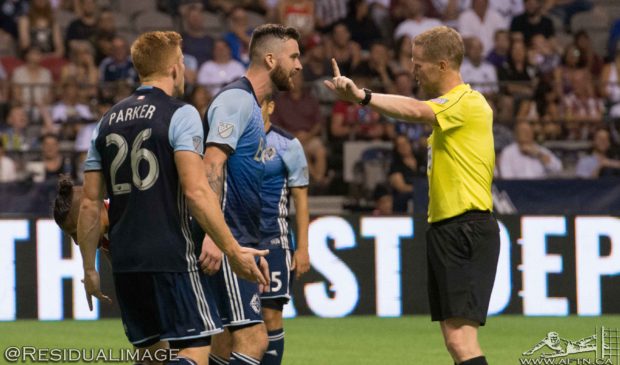 When the going gets tough, the tough get going. Billy Ocean is a wise man.

And the going is certainly tough for Vancouver Whitecaps right now if they’re to claim a playoff spot in the West. Four points off the pace, they’re going to need to raise their game dramatically in these final few weeks and be prepared to fight and scrap for every single point.

Do they have the stomach for such a battle? Well they better have, they need to have, and they should have.

What the Whitecaps need to show for the remaining seven games is a passion and a fire in their belly that has been missing for much of this season, as I covered in my Goal Canada article this morning.

There were glimpses in LA, but for much of the past two months this hasn’t looked like a team that knows, or seemingly cares, that they’re in a playoff battle and every point is crucial. The Whitecaps have looked like a side devoid of leaders on the pitch.

David Ousted aside, where are the players to rant and rave at their teammates to get them geed up? To light a fire under their ass when they fall behind in matches. We’ve seen very little of that on the pitch, which begs the question is it happening off the pitch? We don’t know what goes on and what is being said behind closed doors, but this team badly needs some locker room leaders to stand up and be counted.

Do the Whitecaps have enough players of Ousted’s ilk in their squad? Players who will stand up, tell their teammates just how it is, and tear a strip off of them in the locker room when it is needed.

“Yeah we do [have those locker room leaders],” Whitecaps coach Carl Robinson believes when we asked him at training this week. “We’ve got a couple missing this weekend. David Edgar has been a vital link to this locker room. Giles Barnes coming in has had a massive impact as well. They’re very vocal people.

“Those two guys especially have come in and stepped the levels up over the last two games. Now we need other leaders to step up. We need David Ousted to step up. Pedro Morales to step up. Matias Laba can step up, not vocally but with performances, and he’s done that in the last two games. That’s what we’re going to need. We cannot be carrying any player between now and the end of the year.”

The fact that Robinson highlighted two of his most recent recruits is perhaps telling of a lack of strong leadership amongst the players that he had in the first half of the season. It also maybe hard for those players to stand up and call out their teammates when their own performances haven’t exactly been stellar.

Robinson feels that part of the issue with locker room leaders coming forward in his squad as it stands may be cultural, with the South/Central American players tending to be more quiet in the locker room than the English speaking ones, preferring to do their “talking” on the pitch.

On the flip side to that, Barry Robson was heavily criticised during his time here for his arm-waving shouts at his teammates. But surely that’s just what this mild mannered, complacent Whitecaps team needs right now, well, maybe not quite to Robsonesque extremes but some of the players definitely need to have a rocket up their ass from time to time.

“Cultures are different,” Robinson added. “South, Central American cultures tend to be quiet and lead by example in their professionalism in that they do. The English [speaking] culture tends to be rant and rave. I’m a mix inbetween. You’ll say I’m nice at certain times and you don’t see the bad side of me.”

But therein lies another problem for Vancouver at the moment. There’s a high Latino make-up of this squad, including club captain Pedro Morales. Does that mean these players are quiet and won’t stand up or speak up? If so, where does that leave Morales? A captain, by definition, is the player that leads the team, that stands up and calls out others, that motivates verbally both on and off the pitch.

We questioned Morales’ appointment at the time and we simply have not seen a fired up captain on the pitch for the Whitecaps when he’s wearing the armband. We do see it from the likes of Ousted, and Kenny Miller when he was here, are deputising.

“I’m not going to comment on that.,” was Ousted’s take when he was asked this week if the team was getting the leadership required from Morales. “Pedro’s doing all he can out there to step up, but it’s not just Pedro. We need everybody to step up and everybody to show leadership out there.”

With many of the players not performing to their levels on the pitch either, like we said, it’s hard for them to then call out other. Morales unfortunately falls into that category just now. The ‘Caps are particularly missing the crucial impact of their Chilean playmaker, who has looked a shadow of the player he was two years ago when he first came to MLS. A fact Robinson is only too very well aware of and he challenged him to do better.

“On Saturday I think he did okay,” Robinson said of his captain’s performance against LA. “We’re not in the stage for any player to do okay at the moment. We need our players to perform excellently.

“Some players have performed excellently, over the last two games especially, and they’re rightly in the team. Now’s the time for the big players to step up and Pedro certainly is a big player for us.”

With seven games remaining and six senior members of the squad away on international duty for this weekend’s must win home game against New York Red Bulls, it’s hard to look around the squad and see where the leadership is going to come from outside of Ousted.

Pa Modou Kah would have been one to step up and call out, but he’s no longer on the first team squad. Morales has talked about wanting to go out with a bang if this is his last season with the Whitecaps, as he has indicated. There’s more to doing that than just contributing some goals and assists. We need to see strong leadership from him more than ever.

Is this a happy Whitecaps locker room right now? In the past we heard non stop about the great atmosphere and the great culture here. This season, not a peep. Russell Teibert told us that that was because it now went without saying, but is this a harmonious dressing room?

In many ways it shouldn’t be. This is a losing team. Players should be pissed off – at their own performances, at those of others, and of not getting a game if they are missing out.

A lot of the leadership with a team comes from the manager, and Robinson has to lead from the front. There’s no doubt in my mind that Martyn Pert is the guy on the coaching staff to deliver the hairdryer treatment to the players in the talks, with a nice good guy/bad guy set up.

That’s fine, if it works, which is doesn’t seem to be doing right now, and ultimately the players should be having regular player only meetings like they have in the past. Frank discussions about just what is going wrong. Maybe they are, maybe we just don’t hear about it.

No one at the club should be left in any doubt of their own and the team’s shortfalls this season.

The Whitecaps need leaders over these last seven games. So let’s see just who have the balls to step up and be just that.