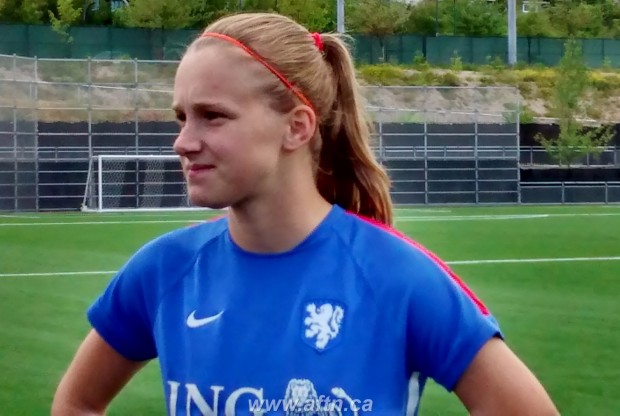 There’s already been a number of key and interesting stories to come out of this Women’s World Cup and thankfully they haven’t involved the turf pitches or FIFA shenanigans.

The shortening gap between the top nations and the mid-ranked teams is definitely one of them. The gulf in quality between the top five sides in the world and teams from Africa, South America and the up and coming European countries has definitely been reduced, and leading the way in a many of these nations is the rising talent of a number of talented young prospects.

Fleming hasn’t had too much chance to shine on the top world stage just yet, but she has been joined in the tournament by a number of top teenage stars from across the globe.

Two of them will take the pitch at BC Place tonight for the Netherlands, as the Dutch set out to shock the reigning World Cup holders from Japan.

The Netherlands have two 18-year-olds in their ranks – midfielder Jill Roord and striker Vivianne Miedema.

Roord has yet to feature for the Dutch in the tournament but Miedema has started all three of the Netherland’s group games and has played all bar nine minutes so far.

Miedema is delighted to be here and blazing the trail for young Dutch players to follow and the pressure that comes with that.

“I felt a lot of pressure the first games from my home country,” she told reporters at training on Friday. “Not that much from FIFA or whatever. It’s exciting for us to play. We know that we can play way more tournaments after this, so we’re just here to learn and get the experience but also to get the good result.”

As to how well Miedema has coped with the pressure so far, well the nerves got the better of her before the Netherland’s first game against New Zealand, but they’ve been improving.

“Well, I was sick before the first game, so I think not all that well!” she joked. “Now it’s fine. Now we know what we have to do. We know that we can play our own way of soccer. We’re getting better in the tournament so we have a good hope for the next game.”

That next game now comes tonight against Japan.

Expectations of the side from within the country are certainly higher than from the outside looking in. A good high-scoring qualification campaign and some exciting talent will do that in a football mad nation.

How many outside of the Netherlands expected them to qualify from the group? Hard to say, but finishing third, which they did, would likely have been the first goal to achieve from the tournament. Anything better and expectations exceeded.

“It’s great,” Miedema says of qualifying to the knockout stages. “We had to wait till all the other games were done and then we realised that we were one of the best 16 teams.”

Miedema’s enjoyed her first World Cup, as have her teammates. They looked good in a strong 1-0 win over New Zealand, really should have taken something from the 1-0 loss to China, and had there been a few more minutes left in their final match, I wouldn’t have been surprised to see them grab a second, and a win, against Canada.

The games, and now tonight’s Round of 16 match, have seen the Dutch go from coast to coast, which is tiring for those used to it, never mind anyone else. But like so many of the young players in this tournament seem to do with a multitude of things, Miedema just takes it in her stride.

“Yeah, that’s a lot of travel,” Miedema admitted to AFTN. “We played first in Edmonton then back to Montreal, then we came here. You get tired from a lot of travelling, of course, and the time difference the whole time. But you know that you’d have to do that before you came here, so it’s fine for me.”

Travel aside, finishing third in Group A could yet prove beneficial for the Dutch. They’re in the easier half of the draw, avoiding a number of the big hitters and four of the top five ranked teams in world. Miedema isn’t looking too far ahead just yet but she knows the Dutch dodged a few bullets.

“Yeah I think so, but first we have to beat Japan!,” Miedema told us about the half of the draw the Netherlands find themselves in. “That’s a really hard game. We have a lot of respect for the whole team. We know they were the World Champions the last edition of this, so we just have to have a good day and we maybe have a little chance then.”

The Netherlands now face a Japan side who have looked solid and composed, if not startlingly impressive. They’re well organised at the back and only let in one goal in their three Group C matches, but they only scored four in the process. Not exactly something to strike the fear into other teams and it’s something the Dutch feel can be exploited and pave their route to a shock result through the attacking firepower they possess.

“Yeah of course,” Miedema told us. “If we keep them to nil for a long time and they don’t score, we really have a chance. We have really good attackers, like Manon Melis and Lieke Martens on the outside and then [Danielle] van de Donk at 10, so we know that we can score every game. So then we have a chance to get a win and we’re hoping for that scenario.”

The chemistry within the Netherlands side has slowly been building as the tournament has gone on. Miedema has noticed it on the pitch and she’s hoping it just continues to improve to keep the Dutch around the tournament that little bit longer.

“We didn’t play together for a long time before we came here, so you always needs some matches to get into your best field play,” Miedema told reporters. “Now you know that it’s getting better. When you’re on the field, you can feel that. I hope we can do the same against Japan and a little bit better than against Canada.”

Miedema herself cuts an impressive figure. She’s confident, refreshingly honest in interviews, yet still has the teenage side to her, giggling during answers. She’s a very endearing player.

She may not have bagged her first World Cup goal yet, but Miedema is a world star in the making and has been since bursting onto the national team scene in 2013.

Miedema made her club debut for Dutch side SC Heerenveen aged just 15 and her goalscoring prowess (she scored a staggering 78 goals in 69 appearances) soon earned her a move to Bayern Munich who went unbeaten to win the Bundesliga title.

Wearing the number 10 shirt with Bayern has seen her compared to Dutch compatriot Arjen Robben, only much more likeable. Others compare her to Robin van Persie, who she had previously said she models her game.

It’s the usual lazy journalistic tendency to tag any up and coming player with that of a player of old. It’s bad enough in the men’s game, never mind when they start crossing genders. Miedema laughs it all off, but has the perfect retort for it.

“I don’t [refer to myself like that], but all the media’s doing that,” Miedema smiled. “It’s a great honour to get that name, but I just hope that parent later say that their daughter play like Miedema or Martens or Melis. I think that’s way cooler.”

The Netherlands are making their first World Cup appearance, much to my annoyance after they eliminated Scotland in the European playoffs! But they are most certainly a team on the rise.

Their U19 side won the 2014 European Championships and many of those players are expected to break in and bolster the senior side in the next couple of years. The Dutch will also be hosting the next senior Euros in 2017.

Having seen the buzz around hosts Canada, Miedema can’t wait to be a part of that in her own home country.

For now though, she realises the importance that the current squad and their performance at this World Cup will mean to the women’s program in Holland. And also the opportunity for herself and the other players to influence and be role models to all the young girls back in the Netherlands, where the women’s side of the game is not always taken all that seriously.

“I think it’s important,” Miedema said. “We play the European Championships in about two years in the Netherlands, so this is the chance to get it bigger in our country. That I’m one of the role models, is cool.

“It’s getting better now but you still have a lot of people who think that women’s soccer is stupid. We just have to change that and I think we’ll have a great tournament in two years.

“But if you compare it with men’s soccer, you cannot do that. We’re not that fast but I think our way to play is pure. We don’t care about money and stuff. We just play because we have fun and I think you see that on the pitch.”

And expect to see it on the BC Place pitch tonight.