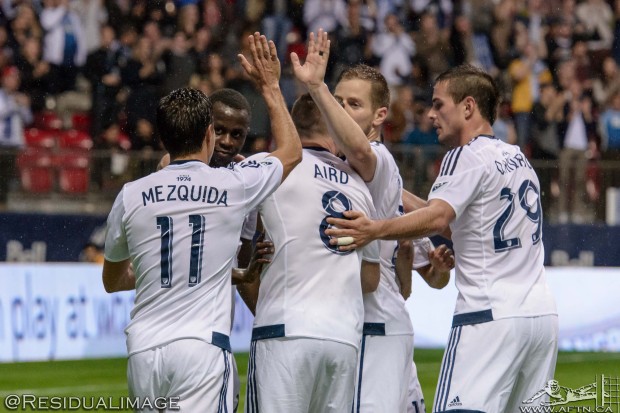 A potpourri of different thoughts after Vancouver Whitecaps’ 3-0 win over FC Dallas at the weekend.

Winning is a funny thing

It shouldn’t be a surprise because it’s pretty much how it goes for every team in every league of every sport, but it still is amusing that the Whitecaps can create plenty and play well for large parts of the game away from home against an in-form RSL but still lose, and then only days later get more or less outplayed by Dallas in your own building but win.

And the humourous part isn’t the result, it’s the reaction to the result.

Some fans were calling for Carl Robinson’s head after the defeat in RSL. Ninety minutes, and three goals, later and the mood in the room is a lot more positive.

Truthfully, not much has really changed other than the position in the table. On a balance of play they probably should have earned three points in Utah and were probably lucky to take three against Dallas.

But the goal scorers are still having problems scoring goals, the Whitecaps are still struggling to find ways for Kekuta Manneh to find space except when leading, and most concerning is that the midfield has been even more non-existent than in previous seasons.

But of course the league’s best defence from 2015 wouldn’t stay as sloppy and disconnected as they started this season, and players like Matias Laba, Kendall Waston, and Cristian Techera, who were some of the most consistent last season, have shown signs that they’ve returned to their old selves.

The point is, it’s not as bad as it feels after a drubbing and it’s not as good as it looks after a 3-0 shellacking of the league’s best team. And just like young players go through peaks and valleys, so do young coaches.

Carl Robinson turned around a club that was rudderless in every sense of the word. He improved the point total two years running, created a defensive juggernaut, turned a focus to development, and created an environment of professionalism and respect in an organization known for the unsavoury ways it’s shipped off fan favourites and quality servants of the badge.

Now he’s facing the first real bit of adversity in his young managerial career. And he deserves the season to try and sort it out.

From Zero to Hero

Coming in to the season, Fraser Aird was expected to at most challenge Jordan Smith for a starting spot, but eight games in, the young Canadian is almost an automatic starter. Now, that was not all his own doing. Jordan Smith has looked even worse in his limited minutes than last season (if that’s even possible).

Of course, Aird had a shocker in his first match, and has clearly had some growing pains learning the fullback position at this level. His positional awareness still could use work, but you can see him getting better game by game and he has the appearance of a player with all the work ethic, character, and heart which makes you think that he’ll just keep improving.

He’s had to, because teams who saw the first couple matches have all chosen to attack down his side, and he’s adapted well. He still has a tendency to lunge in for a tackle when the better decision is to jockey and contain, but Aird is lucky enough to have the speed to make up for some of his missteps.

Critics have pointed out the amount of times he’s been vacant during a rush down his side, but it seems that in recent matches the only time he’s been absent from his position was when a teammate gave the ball away in a poor position while Fraser had made a run forward.

And those runs forward are frequent. Aird has been the most consistent attacking threat for the Whitecaps so far this season (which doesn’t say much for the attacking players). He needs no invitation to join an attack, will come central or make the overlapping run, and his crossing is likely the best of any player since the ‘Caps joined the MLS.

He’s the kind of player both Whitecaps and Canada fans will really want to cheer for.

It’s hard not to feel for Octavio Rivero.

He generally seems like a good guy and a good teammate. He works his ass off every game, does everything he’s asked to do, but nothing falls his way once the ball is inside the 18. While he doesn’t look like he’d ever be a natural finisher who will score 20+ goals a season, he’s certainly not a 1 goal from open play in 28 games player.

It’s a shocking number and one that makes you think that even if he starts scoring at a normal human rate that he wouldn’t be back after the end of this season, but Carl Robinson continues to start Octavio even when starting Blas Perez would make more sense.

It seems that Robinson has hitched his wagon to Rivero and he’s not willing to give up on him. All the analytics will say that Rivero is due for a correction and should be racking up the goals sometime, but for every game that goes by without a Rivero goal it seems harder and harder to think of a situation where Rivero will starting banging them in with consistency.

It’s enough to make you wonder why, when given the perfect opportunity, that Robinson didn’t take it. Fresh off a couple poor results, playing Perez against his old team, after he was able to get an extra-long rest, would have absolutely been a reasonable approach versus Dallas, but once again Rivero got the nod and once again it was bagels for the struggling striker.

Good news for Rivero is that the team won and there was plenty to talk about other than a lack of goals, but even if it was another disaster, it appears Octavio is going to keep showing up on the team sheet every week.