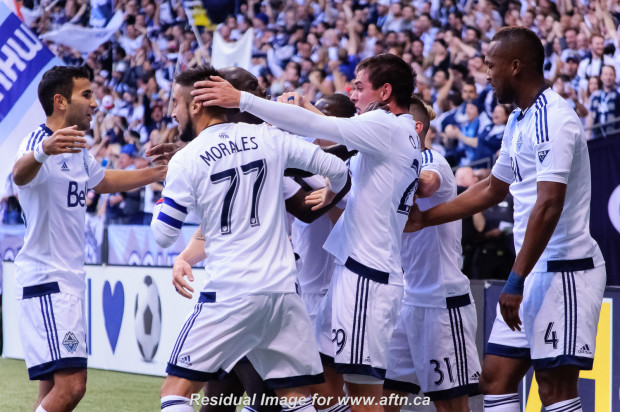 Ten games into the 2015 season, the Whitecaps remain tied for the lead in the extremely competitive Western Conference with a solid 17 points. Yet not even the most faithful Vancouver fan would claim the Blue and White have shown the chops of a true contender.

Plucky road performances and a strong approach to team defence with a very in-form keeper have been the recipe for success through the first third of the season.

And while there have been some excellent results, the only game that really stands out as a statement to the league was a 2-0 home win versus LA Galaxy, who are, as usual, hiccupping their way through the first part of the season. To the eye, however, many of the other results have left fans wanting more.

No better opportunity will present itself to the Whitecaps, as for the remainder of May they will be given plenty of opportunities to iron out the wrinkles and take the next step to prove they belong at the top of the league.

A wounded animal is a metaphor commonly use when referring to struggling teams, but Philadelphia Union arriving to BC Place presents an opportunity more akin to a pesky bug needing to be squashed than an adversary making a fight or flight decision.

The Union enter the game on Saturday with only a single win on the season at home, a game in which to win they needed to score a goal off a player’s ass. More recently they were thumped by Columbus 4-1, and then lost at home to the not-so-mighty TFC.

Couple that with the fact that internal strife appears to grow within the club, as they’ve given their World Cup keeper Rais M’Bolhi an extended vacation away from the team, have a catalogue of injuries including their number 2 and 3 keepers, meaning they will be starting ex-Whitecap third stringer Brian Sylvestre.

A home match to Philadelphia is not a game the Whitecaps should win. It’s a game they must dominate.

Following that, the Whitecaps have the Voyageur’s Cup Semi-Final matches home and away with FC Edmonton (barring further wild weather in the Canadian Championship) to pad the stats and to try and get the good feelings going, with a massive tilt with Western Conference favourites Seattle playing middle log in a FC Edmonton bonfire.

While a home derby match with Seattle is hardly a game you can ever handicap, the Whitecaps have played well against the leagues ugliest kits in recent times, Vancouver’s typical strong defence in the middle of the park and quick and accurate counter-attacks is a very good method to dull the rave green.

Follow that up with a game in Colorado against another poor Rapids squad (despite historical struggles in Commerce City) and then a home game against a RSL squad that has already given 3 points to Vancouver, and the pathway is laid for a May which could vault the Whitecaps into a position that would make the lengthy road trip in June due to the Women’s World Cup seem far less desperate.

The table is set and the only thing that is needed is a little momentum.

Octavio Rivero has been everything you would hope for, but you get the feeling that there are more goals available for the newcomer. Meanwhile, Pedro Morales has been the subject of criticism for continuing struggles on the road and a less than overwhelming stat line, but despite his occasionally lacklustre play he has still been contributing and is usually good for a couple moments of brilliance able to swing results in the Whitecaps favour.

Hopefully assisting Pedro will be the emergence of a secondary creative threat. Mauro Rosales appears to be regaining his feet after the early season ankle injury, Kekuta Manneh has been his usual electric-then-invisible self, Nicolas Mezquida has started to settle in but has yet to show he can dictate the flow of a game, and recent addition Cristian Techera has yet to get enough game time to show if he can be the wide creator the Whitecaps have been looking for.

It may prove to be a critical stretch for the Whitecaps’ season. Should they plod through the month picking up plucky points and fail to gain confidence, June could be a long month which could see the Whitecaps stray towards the bottom end of the playoff line.

However, there’s plenty of fuel for a real hot stretch, and if some of the Whitecaps attacking players can show some impetus, perhaps it will be the spark for a really scorching year.