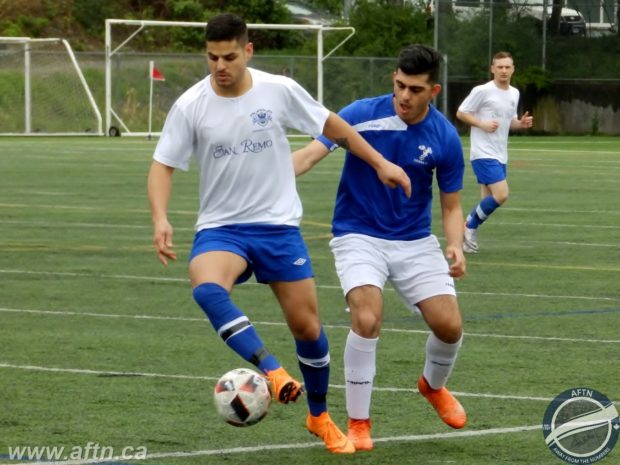 After all the protest drama in the A Cup, it’s nice to get away from it all with the Keith Millar Provincial B Cup!

The four quarter-finals last weekend produced 16 goals between them, saw a league champion knocked out, and leaves three leagues still hoping that one of their teams will lift the trophy next Saturday at Burnaby Lake.

The action got underway at Hugh Boyd in Richmond on Friday night as the RASA champions West Coast FC hosted VMSL side Vancouver Strikers, and with the form that the Richmond side have shown this season, you have to put this one down as something of a cupset, with the Strikers going through 2-1 after a hard fought match.

A Burnaby League side was guaranteed a semi-final place on Saturday afternoon as treble winners Impero Calcio took on rivals, and league runner up, Sierra FC. 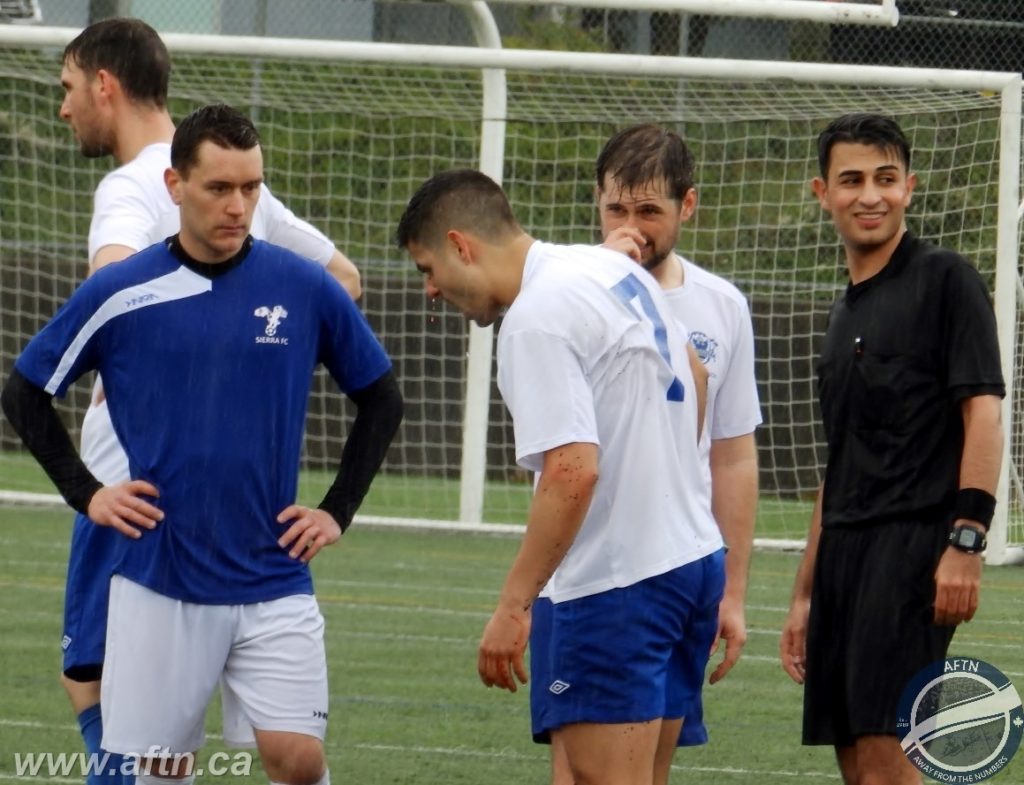 And what a start there was to this one, with both teams scoring in the first three minutes.

Sierra opened the scoring just two minutes in, pouncing on a rebound after Impero’s keeper Marco Caporale made a save with his legs at the near post, directing the ball to a wide open back post.

Thoughts that Sierra would build on that and get the better of the BMSL champs lasted around a minute after Impero’s leading scorer, Lucas Sweda, rose unchallenged to head home a corner and the equaliser.

As the rain turned torrential at times, both teams had half chances, with Impero looking the more dangerous side in the box, but there was no further scoring and the teams headed in at the half tied at one.

The second half started in much the same way, but Sierra were handed a golden opportunity in the 72nd minute, literally, as Impero were penalised for a handball in their penalty area. Up stepped their captain but Impero’s keeper Caporale pulled off a superb save to keep the scores level.

It was to prove a costly miss as Impero went up the pitch from the resultant corner and their 7 foot sub towered above everyone to head home a Sweda cross with 16 minutes remaining.

Sierra pushed for the leveller to no avail, and Impero had a couple of chances to wrap it up go a begging, but with no more scoring, the BMSL champs advanced with a 2-1 victory and awaited the winners of Sunday’s clash between Coquitlam Metro Ford Lupi and Richmond All Blacks.

You can see all the goals and the penalty save, in our highlights below.

The final two matches of the round came on Sunday and the first saw the last FVSL representatives bow out as Fraser Valley Red Devils went down to a 4-0 defeat at VISL Division 3A champions Power River Villa up the Sunshine Coast.

Their reward is a long trip to Coquitlam this weekend to face VMSL Division 2A and Division 2 Cup champions, Coquitlam Metro Ford Lupi, who ended Richmond All Black’s great run in this year’s competition with a clinical 5-1 victory on Sunday evening.

All those matches now set up two very tasty looking semi-finals on Sunday, and Canucks4Ever from the Take The Piss forum previews those for us.

After a pair of cushy home games, it is now Powell River’s turn to make the long journey from the Sunshine Coast. The Island champions hardly needed to get out of first gear to sail past the final FVSL participant, Abbotsford Red Devils, in the quarter-finals, dispatching them 4-0. They will now face the lowest ranked VMSL side to qualify for the competition, Vancouver Strikers.

Not sure you would have picked the Strikers as one of the two teams to be representing the VMSL in the semi-finals, but they have taken on all-comers. Saanich did not bother to show up for their first round meeting but then the Vancouver boys rolled to the Valley and beat the FVSL’s league and cup double winners, Abbotsford 2-1. They followed that up with a win over the Richmond league champions West Coast FC, 2-1 again, last weekend.

After knocking out a pair of champions, Strikers are now the only non-league winning team left in the competition and they’ll be looking to complete their hat-trick. The VMSL and BMSL winners are on the other side of the bracket and, of course, they host VISL winners Powell River this week.

Evidently Strikers are not intimidated regardless of the team that they are playing and they proved that this season and they are the only team to defeat VMSL double winners Coquitlam Metro Ford to this point of the season. Powell River are tough customers though and stingy as well. They do not concede many goals, but that would seem to suit their Vancouver hosts just fine as it appears tight scorelines are kind of their thing. Watch out for another 2-1 in this one. Strikers to advance.

Easily the Match of the Round here as this sets up as an absolutely titanic clash.

Both these teams won everything in their domestic leagues. Lupi the VMSL Division 2A title and the Div. 2 Cup; Impero the BMSL Division 1 crown along with both cup competitions: the Rudolph Cup and the League Cup. Each side lost just once this year and each team boast good goal scorers; CMF – Eric Dove (14), Dalibor Plavsic (10), Moreno Zanetti (7); Impero – Lucas Sweda (13), Bruno Teixeira (7), Salvatore Corrado (6). The classic case of an unstoppable force meeting an immovable object as both these teams are certain that they will be lifting the trophy come next weekend.

This match, in fact, could easily be a worthy final. Instead, however, it is only the penultimate step for one of these two sides, while the other will have their season ended. Impero came through a barnstormer of a match against Lupi’s runners up, 13th Legion, in their opener, emerging 4-3 winners among all sorts of fireworks and sendings off for their Vancouver counterparts.

Last week they, once more this season, beat their own league runners up, Sierra FC, this time by a 2-1 margin.

Lupi made life difficult for themselves in their opener when they spotted a plucky Mission side a 1-0 lead and then, after tying things up, spotted them a man advantage as well. Instead though, the Tri Cities crew were rampant, even with a the numerical inferiority, and ran out 6-2 winners. They looked to have a dodgy one last week against a very experienced All Blacks side from Richmond that had already beat the other VMSL Division 2 winner and cup runners up to Lupi, Vancouver Greencaps, who were also the defending holders of this Provincial Cup. All Blacks also proved their pedigree by winning a tough game on the Island, but they ended up being well off the pace against Coquitlam, losing 5-1.

It would seem, however impossible, that CMF may have, in fact, found another gear for this cup competition. They are boasting 11 goals for to 3 against so far in the tournament and will once more get to set up shop on home turf. They are in form and that one tips the scales for me here. Impero are a top side, no doubt, but Lupi look to be quite literally next level at the moment.

We hope to get out to both semi-finals and will bring you a round-up with photos and videos next week. Better still, get out yourself and take in some great local football action.