When it comes to promotions, marketing and creating a spectacular occasion, the BC Lions have Vancouver Whitecaps beat hands down.

At last night’s grand re-opening of BC Place, the Lions did themselves proud.

A huge win from the players was matched by a series of celebrations, as the Lions came back home.

On Sunday, it’s the Whitecaps turn, as they play their first match at the stadium since the friendly victory against Los Angeles Galaxy in November 2007, and their first competitive game there since the NASL folded in 1984.

From what I saw of the revamped stadium last night, it’s going to be a great new home for the Caps and I can’t wait for the game tomorrow to see what the football configuration is going to look like. 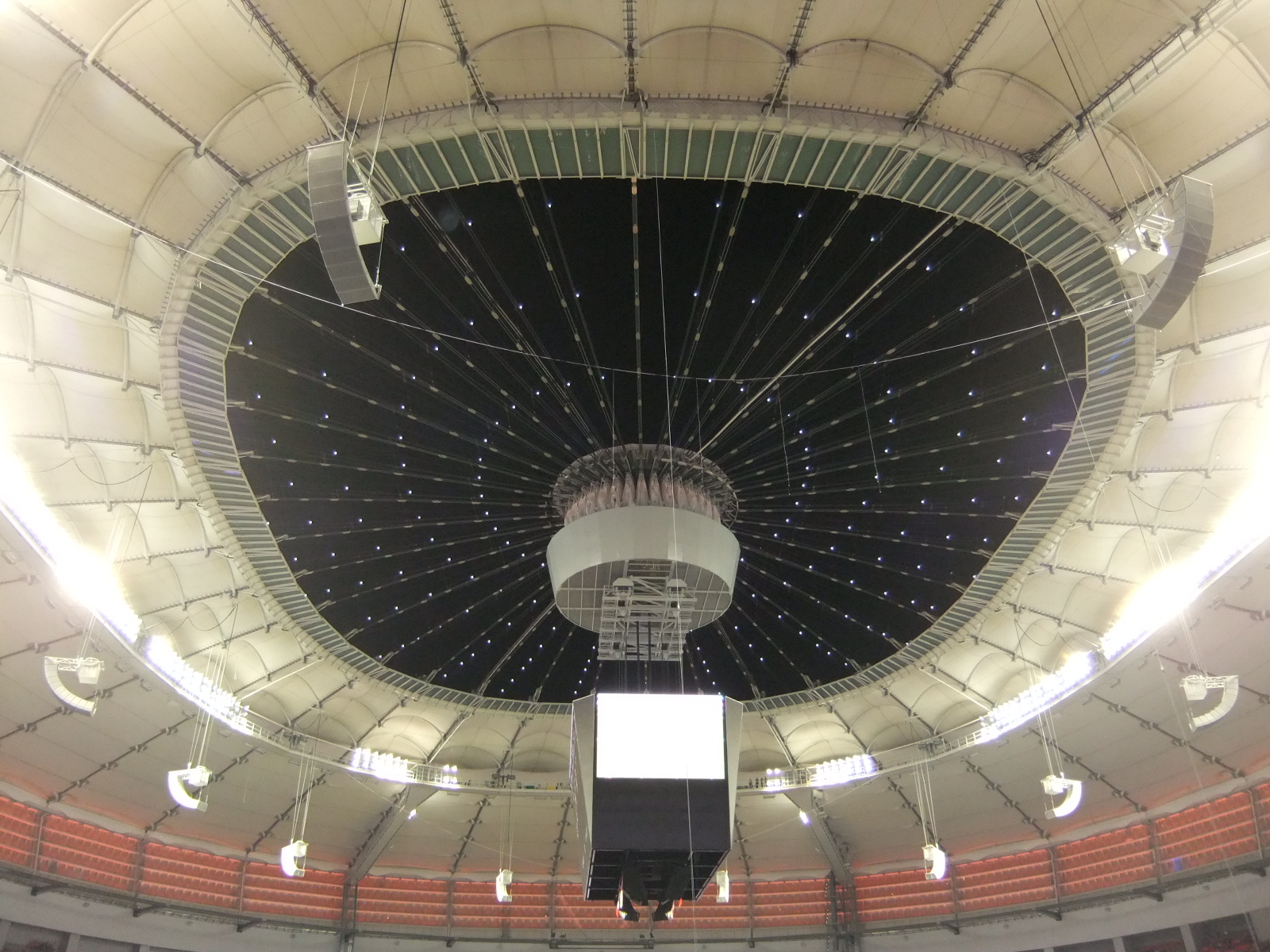 So what were my first impressions?

Well, if you didn’t glance upwards to look at the roof and the lighting underneath it, you may wonder where all the money had gone.

Of course, why would you go there and not look at the roof though?!

It’s an amazing structure and when it’s open it just makes the stadium look majestic.

Last night, it allowed a perfect breeze to come in, which was just as well as the concourse was sweltering.

Actually looking to the skys (or at least in the air) was where you will find most of the exciting new additions to the revamped stadium.

First of all there’s the new giant screen and scoreboard. Actually, giant doesn’t do it justice – it’s immensely huge.

It’s the second biggest in North America after the Dallas Cowboys one. How big must that be?!

The screen definitely has the wow factor. It suckers you in at times and you find yourself drawn to watch the giants on there instead of the normal sized men on the pitch.

At one point last night, I felt the Felion cheerleaders were right on top of me. That had nothing to do with the stadium, just a dream I had later…

Those in the Southside (and Northside) won’t get the full benefit of the massive side on view it gives, but the HD quality of it let you clearly see the breath holes in the players jeresys last night, it was that clear.

Coverage on the screen (and for those watching their TV’s at home) is aided by one of those neat aeriel flying spidercams hovering above the action on the pitch. I love those. Very World Cupesque!

The other thing you noticed if you looked up was the capacity to change the stadium configuration from throwball to football size. 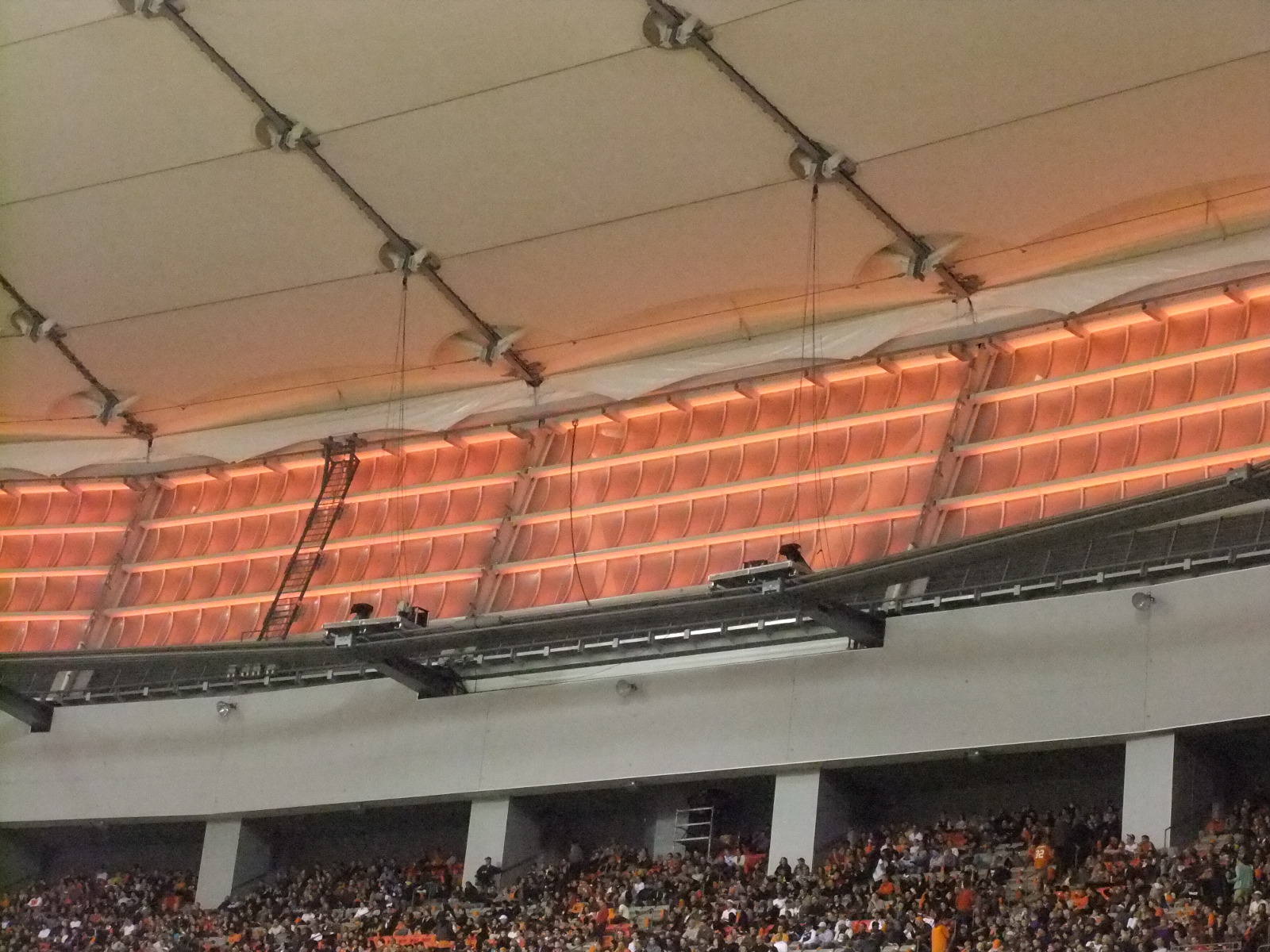 The Whitecaps have said all along that they don’t plan to use the upper tier and wanted to create a more intimate setting by bringing down a tarp or awning that will make BC Place look like a one tier venue, albeit one then with a giant floor to ceiling ratio!

You can see from this picture where this covering is kept when it is not being unfurled and all the strings and pulleys that will make it work.

You can also see the orange lighting that will be blue for when the Caps are playing hosts, although I don’t know if the tarps will cover this from the inside view.

It’s all fantastic state of the art stuff.

The only real problems of the night were to be found in the concourse.

I didn’t see anything that had changed there since the revamp they did of that and the toilets for the Olympics.

One thing that definitely hasn’t changed is how packed and hard to move around it is. Going out at half time to eat, pee or both, is not a happy trip.

The lines for food and beer were insane.

A number of the food concessions actually seemed to run out of food. Hot dogs seemed in short supply and some only had fries left and nothing else.

Hearbreakingly the mini donut stall behind my section ran out. Shocking!

The food does seem to have improved, with some speciality carts.

The one which excited me the most was Vij’s Indian cart. Not what you would consider to be traditional football fare but my favourite kind of food can be good anywhere and anytime!

We just need to get a pie stall in there, serving up some bovril to wash it down and we’re sorted. 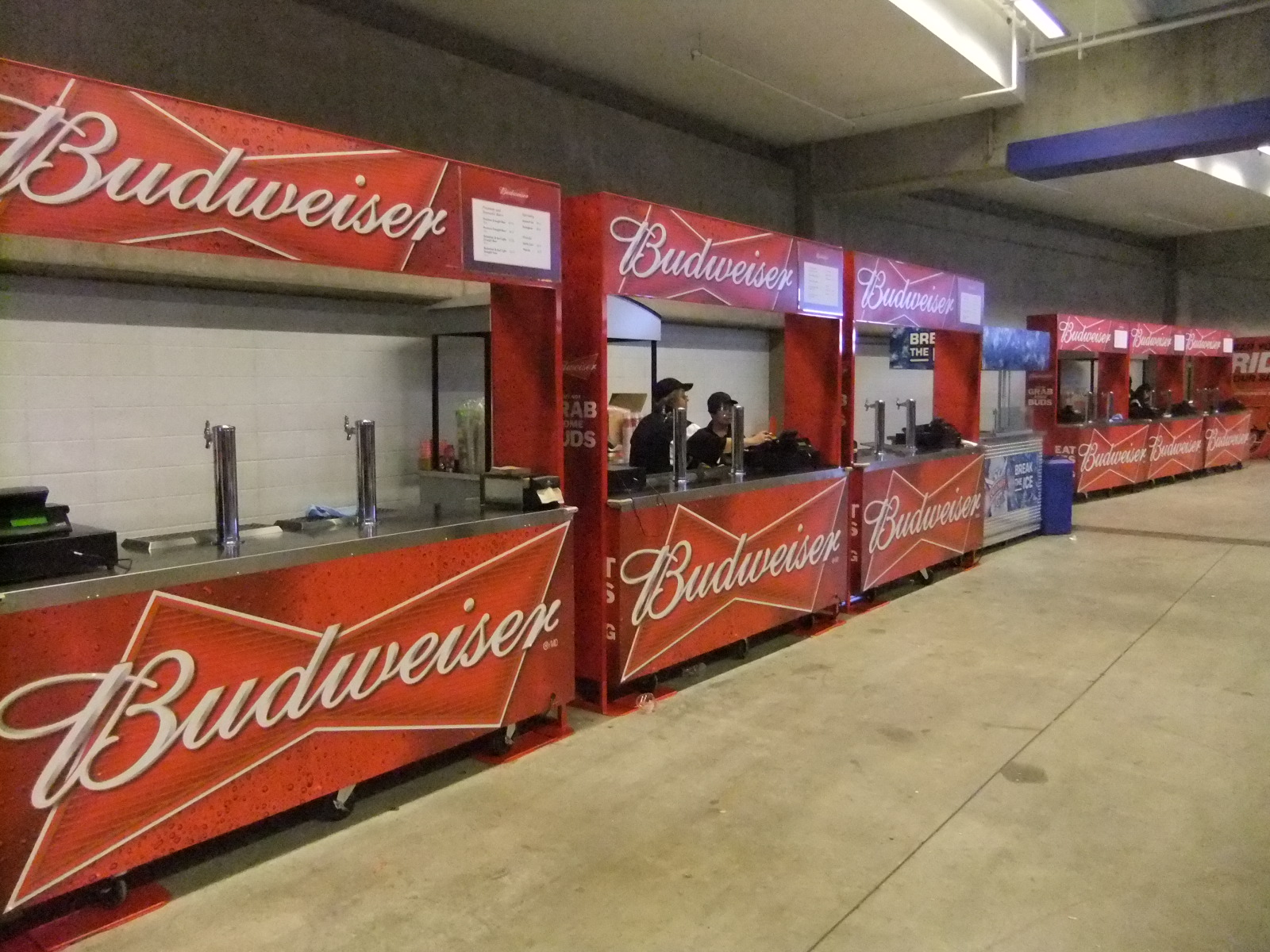 1130 Radio was reporting on the way home that the beer line ups were up to 45 minutes. I could believe it from looking at the queues. You couldn’t move for them. Would you queue that long for Bud and pay over $10 at the same time?!

If you’re looking for something that isn’t Bud, good luck!

I’m sure there will be some stuff, I didn’t look, but you certainly can’t miss the Budweiser branding everywhere.

With all the money that’s been spent, you’d think they could afford to put in a few vending machines so you could get water or pop without having to stand for an age in the food concessions.

Hopefully something that will be added.

All of the Budweiser branding matches the red seats I guess, the centre field versions of which are lovely and padded.

Retractable seating will be getting brought out into the Southside to give an additional four rows down to pitch level. There will be no retractable seating this season in the Northside, but I believe that this will change for next season.

Want a sneak peak as to what the Southside looks like? 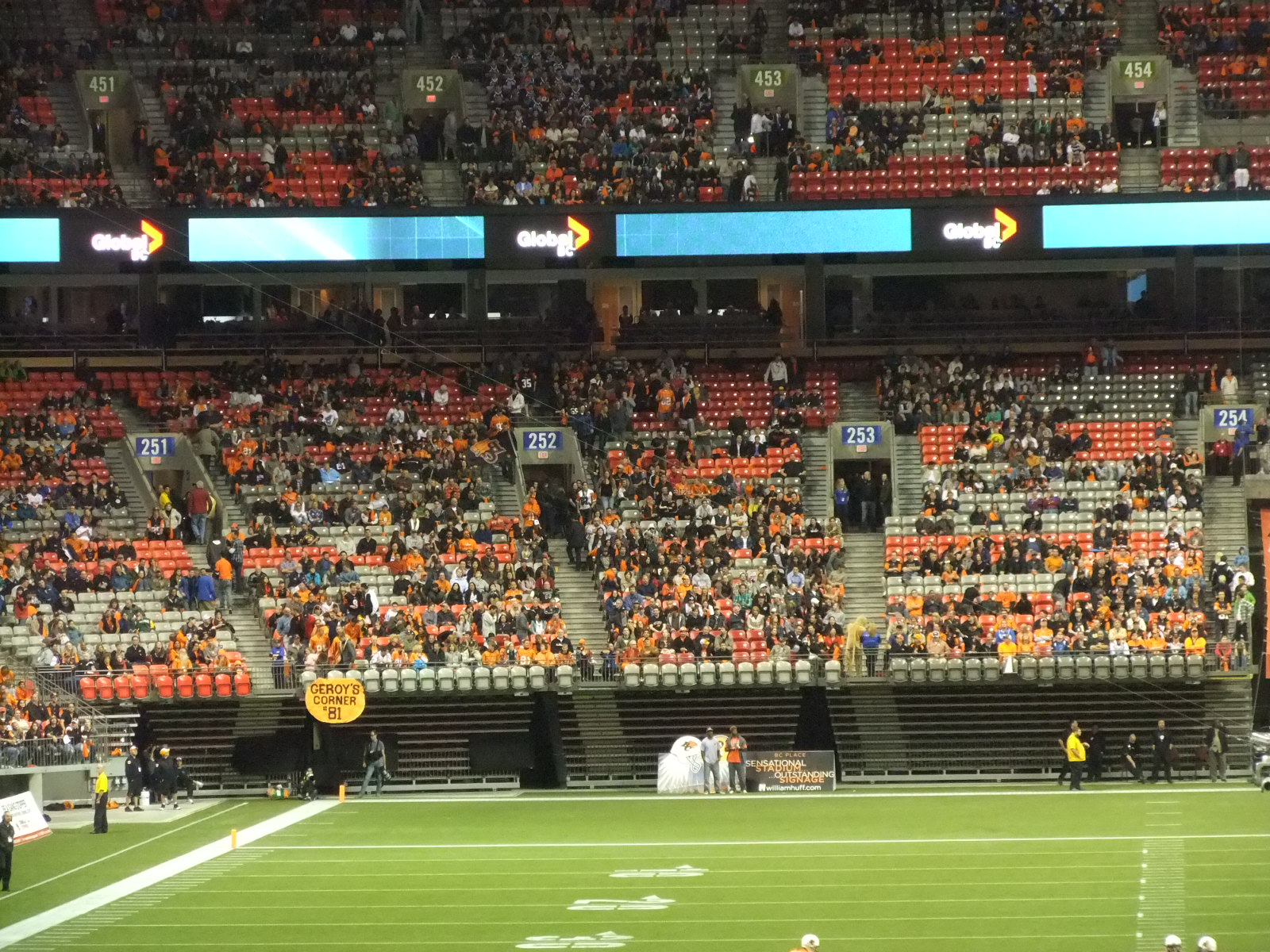 Check out the pic on the right showing sections 251 to 254, with the retractable seating stored underneath.

With many Southsiders relocating into sections 251 and 252, it should help to generate a louder and more unified section.

The Caps have now allowed the Southsiders to have Capos and use megaphones, so this will also help. It’s a win-win for both parties.

It would also appear that security will be more relaxed. Wouldn’t be hard mind you. People were even allowed to wear Mexican wrestling masks last night!

The retractable seats are meant to be going down to pitch level, which should also be a boost for the players and help make it look like a proper football stadium.

You can still see debris coming up off it, but no-one seemed to slip or twist anything because of the pitch in the Lions game. It will be interesting to see the players thoughts about it post game.

Tomorrow is going to be another momentous day in Vancouver Whitecaps history.

Let’s hope the Caps make it the spectacle it should be and not the damp squib the farewell to Empire was. 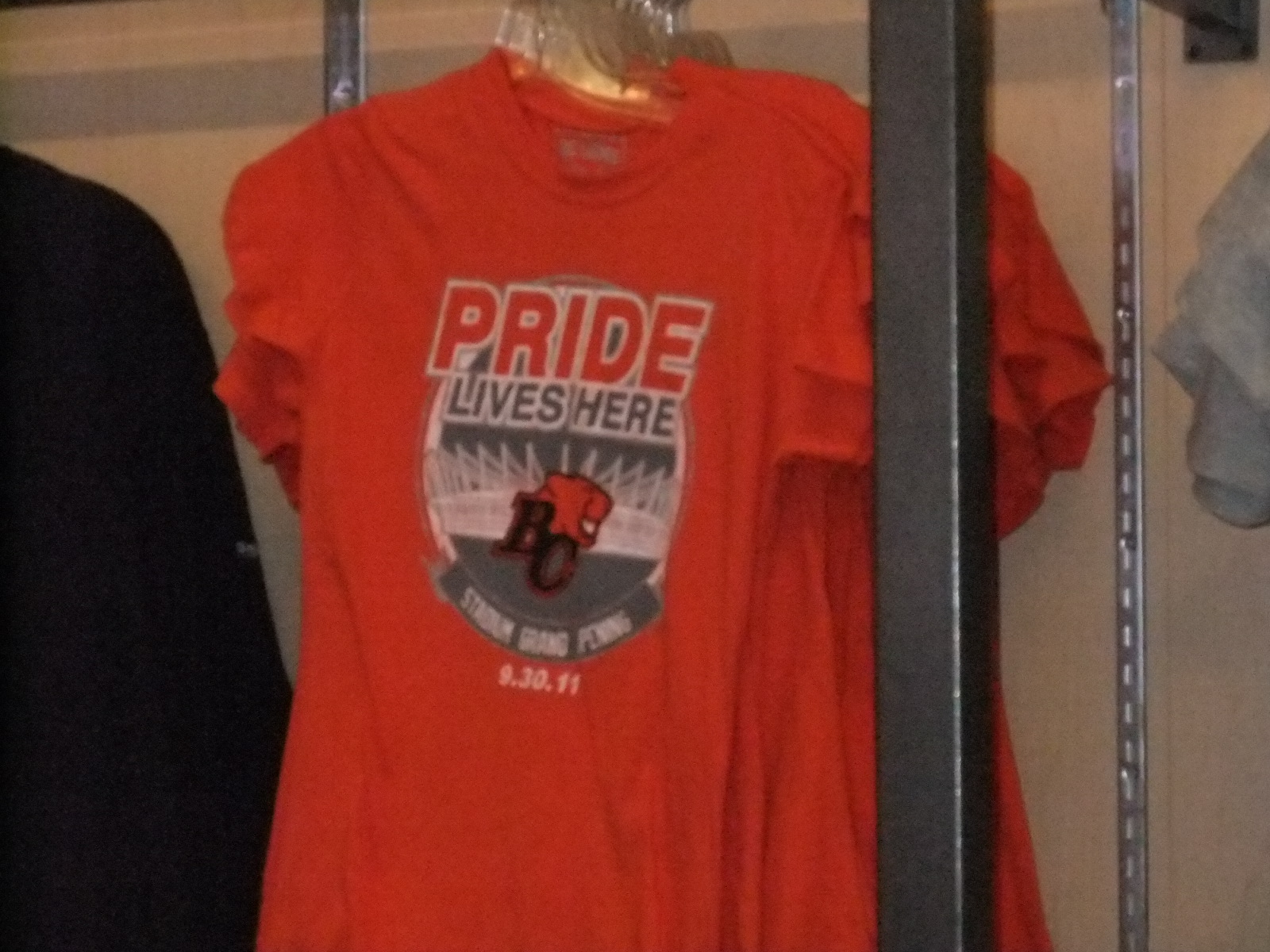 The Lions opened the revamped stadium in some style, even producing special limited edition t-shirts to mark the re-opening, adorned with a special commemorative tag.

They also provided every fan with an orange pom pom to wave about.

What will the Caps marketing gurus give fans on Sunday?

White pom poms? More ponchos? A nice souvenir to mark their return home? Or nothing at all. Place your bets now! We know it’s number three though!

The Lions made a statement, both on and off the field on Friday. The Whitecaps need to now do the same.

Let’s show the city who the number one tenants of the new stadium are.