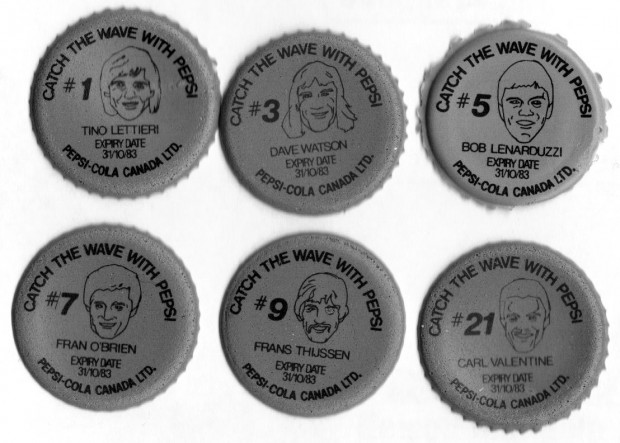 I’m a collector. Always have been, probably always will be. Not weird stuff, just good things, and especially football memorabilia.

Programmes, stickers, cards, badges, books, magazines, comics and a lot more besides. Anything and everything football related, and if it’s to do with either East Fife or Vancouver Whitecaps then all the better.

Looking through some of it the other day prompted me to start another new feature here on AFTN, ‘Found In The Attic’.

‘Found In The Attic’ will look at some of the wonderful pieces of Whitecaps and North American footballing memorabilia and collectibles from both yesteryear and more recent times.

We’ll kick things off with an item from the days of the old NASL.

Look through any of the old ‘Kick’ programs from the time and you’ll see some glorious full page ads, full of colour, bad hair and dodgy clothes. 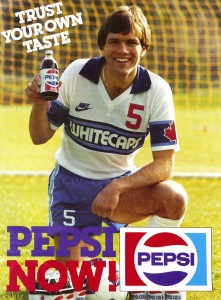 Here’s one with Bobby Lenarduzzi from back in 1983.

As long time supporters of the game in North America, Pepsi took their involvement with the Whitecaps one stage further that year and produced a set of Caps cap liners!

It was a neat little twist and a great play on words.

If you bought specially marked bottles of Pepsi cola, under the caps were special liners encouraging you to “Catch the wave with Pepsi”.

There were six to collect in the set, each one embossed with the strangely drawn face of one of the top Whitecaps players of the day. Legends one and all, but a strange mix for the set all the same.

There was goalkeeper Tino Lettieri, who played two seasons with the Caps and played for Canada in both the 1986 World Cup and two Olympics.

English international central defender Dave Watson only played one season for the Caps and he was lucky enough that it was the one that turned him into a drink liner!

Appealing to more of the ex-pats was Irishman Fran O’Brien. Two seasons in Vancouver but ingrained into Whitecaps history thanks to Pepsi.

The last two cap liners in the set were thankfully set aside for two of the greatest Whitecaps legends. The ones that are still here today, tying the NASL and MLS Caps together.

Ad starlet Bobby Lenarduzzi and Carl Valentine would be the two guys you’d really want to find under your Pepsi cap.

Does anyone reading this remember them? Or have them? There was a set going on ebay recently for $50 which I thought was crazily high. Obviously so did everyone else as they didn’t sell!

One lucky AFTN reader will be the proud owner of them though, as that’s one of the prizes for the winner of our “Last Man Standing” competition.

I’m a sucker for these kind of promotional items. They’re great to look back on and think about what were very different times in football.

It would also be nice if Pepsi or some other drinks company did something similar today for the current crop of Whitecaps. Who wouldn’t want to find Joe Cannon under your cap?

The Barry Robson ones would be reserved for ginger ale of course.