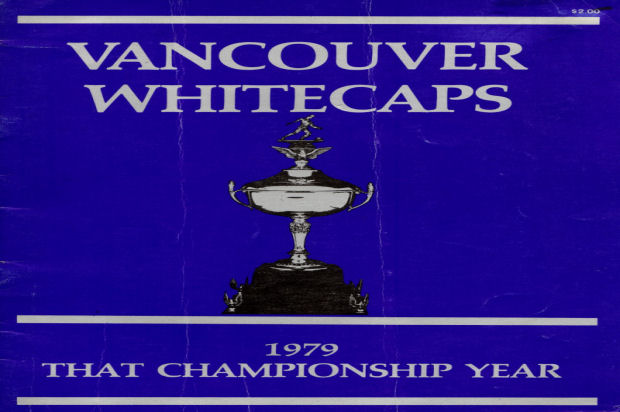 ‘Found In The Attic’ is AFTN’s look at some of the wonderful pieces of Whitecaps and North American footballing memorabilia and collectibles from both yesteryear and more recent times.

We continue the series with a look at another piece of NASL memorabilia.

As the MLS regular season comes to a close, thoughts are turning to who will lift the MLS cup come December 1st. If you’re a Vancouver Whitecaps fan and you’re thinking of Championships, then your thoughts will always go back to 1979 – “That Championship Year”.

Winning the NASL Soccer Bowl that year is still the pinnacle of the Whitecaps long and proud history and that victory, and the whole 1979 season, was captured for posterity in a 20 page publication produced by the Club.

Sold for $2, “1979 – That Championship Year” chronicles the Caps’ Championship winning season, from pre-season through to returning home to Vancouver with the trophy and parading through the city in front of over 100,000 fans.

Written by Josh Keller, and punctuated with 20 photographs from various sources, the special edition of ‘Kick’ magazine tells the story of the season through an introduction, 24 various ‘shorts’ and a four and a half page section entitled “Soccer as it should be”, which chronicles the last regular season game and the playoffs.

For those, like myself, who weren’t around at the time, it paints the perfect picture of a perfect season. There’s all the highs, all the lows and lots of great stories. It’s the closest you can get to teleporting yourself there for the year.

Headings like “The Rivalry”, “Willie’s Magic”, “Gross Robbery”, “Shootout Bloody Shootout” and “Sounders Flounder”, regale the reader with tales of the original Cascadia rivalries, shootout wins and shootout losses, and the battles with the League’s big names like Cruyff, Pele, Best, Neeskins, and Mueller. 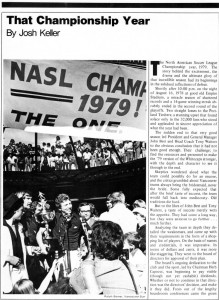 Soccer Bowl triumph aside, it was certainly a season of stories for the Whitecaps: selling out Empire early with 32,372 fans when the Cosmos came to town; a 14 minute stoppage for a mass brawl and pitch invasion in the return game in New York; tornados in Tulsa causing the first ever NASL match to be abandoned; a troublesome and referee confusing back bar in the Empire nets; and, of course, Willie Johnston’s famous beer swig.

There’s even far fetched tales of games where the Whitecaps manage 26 shots! Carl and Bobby, can you please have a sit down with the current crop of Caps and explain to them how this works?

And if you don’t know too much about that famous season in the Caps’ history, then track this souvenir brochure down, as it’s the perfect place to start to find out.

There’s been a few kicking around on ebay recently, so keep an eye out and relive the heady days of Soccer Bowl success and when the Whitecaps were the number one sporting team in Vancouver.

I’m looking forward to buying the souvenir brochure for the Caps’ first MLS Cup win. As fun as that will be, the stories just won’t be quite the same.