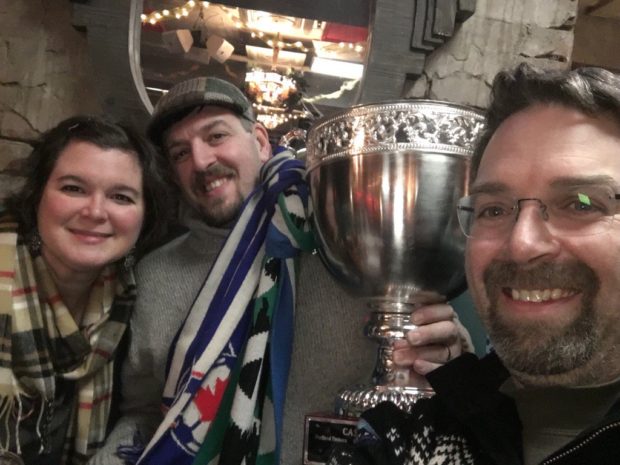 Saturday night I was sitting in Doolins amongst some Southsider friends enjoying a rare off season meet up for beer, the official business of our group’s AGM, and the MLS Cup Final.

The beer was great; I got on a Postmark ISA and stayed there for a bit. The AGM was good for an AGM: no coups, fist fights, and only mild and unproven allegations of basic malfeasance. A new board was elected and a good conversation was had about how to build more concentration and intensity in our membership and our section, in spite of the dire form of the last year and the club’s longstanding and continued efforts to make it as hard as possible to work together.

And anyway the Cascadia Cup got passed around and the four Pigeon Casuals in attendance got a few moments alone with this beloved trophy, one that seemed like a cruel consolation prize after 2016. Remembering how we won it in a fashion that delivered a killer blow to Portland’s playoff chances and capped a week of intense grief for them was at least a sweet recollection.

That perhaps set up the scenario for how to approach the MLS Cup Final. Because for me it was all about who was going to lose worse.

Seattle and Toronto in the final is essentially the worst possible matchup possible for Whitecaps supporters. While we do have a fierce rivalry with Portland we are at least united in our dislike of Seattle. Sounders supporters steal our signs as easily as we steal wins and selfies in their home stadium. And as for Toronto, I doubt I will ever seen anything in sport as gut wrenching as the 2016 Voyageurs Cup Final loss.

It was impossible to get behind anyone but the proverbial meteor in this Cup Final. And yet, I couldn’t pull myself away, because the chance to witness one of our rivals experience great disappointment grief and despair was all we had left to cling to from an otherwise shitty 2016.

Several scenarios were traded around. We all agreed that either fan base was going to be equally insufferable with a win, although I tried to make the case that TFC’s supporters would be worse. I started thinking about how it was going to feel for those fans to lose. At the end of the day, I settled on the idea that Toronto losing on penalties at home would probably be the worst case scenario barring a Giovinco own goal. After all, the team had already built a case for the trophy which has to go up there as one of the biggest karma requests of all time. This gave me comfort.

Toronto FC has a spot all picked out to display the MLS Cup they're hoping to win Saturday night against the Seattle Sounders. pic.twitter.com/JlJr3ZjNef

It is odd to watch a cup final hoping that no one wins but praying that the loss is as devastating as possible. It’s probably a unique position for supporters. It feels uncharitable, but with the Whitecaps FO tweeting out good luck messages and later congratulations, someone had to keep the rivalry alive. That little snug full of Southsiders at Doolins did our level best to hope for the impossible result. In the end I think most of us were happy that TFC fans got a taste of what they did to us. There will be a few among us for whom a Seattle win is a non-starter under any circumstances, but I consoled myself with the reality that a dire 0-0 draw that is settled on penalties is the closest thing you can get to a game that has no winners.

It was a miserable evening other than the friends and the beer. May it be the last such evening for a long while.

If there is one silver lining to this result it is that it puts real pressure on our front office to keep up with the (Joevin) Jones’. No matter how this result was going to go, the Eastern Conference final was a match up between our two Canadian rivals who have enjoyed more success than we have. The winners are the second of the three Cascadian teams to have done it now, and Seattle adds that trophy to their Supporters’ Shield of 2014, which to my eye is always a bigger accomplishment. The Whitecaps simply cannot stand still, and despite Seattle winning the MLS Cup after finishing seventh overall, we should not be settling for even that level of mediocrity.

Next season needs to be the year that shows that 2016 was an anomaly. It is time for us to step up our game, on the pitch and in the stands, because unless we disrupt this trend line of results, we are headed on a long slide to becoming a team that is content just to be allowed to play in this league. Supporters are growing impatient, and rightly so. Vancouver fans are fickle at the best of times and supporters want to support the best. We are a city that sings when we’re winning, make no mistake. The only way to change that, to regenerate a base of broad support for the team rooted a true emotional connection, is to bring in players that will perform well and return that love. The last couple of years have seen an erosion in that connection and some days it feels like trying to raise the dead to get a song going in the Southside. We’ll be there next year: give us something to sing for.

There are still moves to make and new hires to be brought in and the offseason is long. But may this be the last year in a long time that we are reduced to watching a cup final we never contested between two teams we should be doing our best to outperform every year. My Christmas wish is that our front office finds a stocking full of pressure and that our coaches and scouts find their men and that our team regains its form. I think all involved must know now that they are out of chances.

Time to get it right. There are trophies to win, and we need to be the first to bring them north of the border.