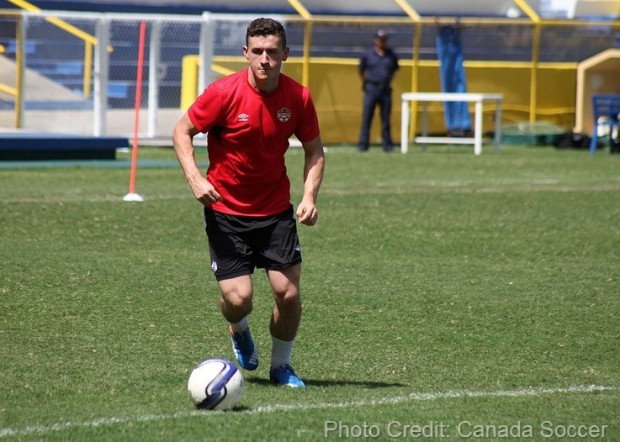 After weeks rumours from both sides of the ponds, it was officially announced on Friday that 20-year-old Fraser Aird has joined Vancouver Whitecaps from Scottish second tier side Glasgow Rangers on a season long loan, with an option to buy at the end of the year.

It was also announced that the Whitecaps had Aird on their discovery rights list, so they have clearly been tracking his progress for some time and are high on what he can offer the current squad.

Aird has mostly played right midfield and right back for Rangers, but was brought to Vancouver to push Jordan Smith for the starting right back job.

So now that the deal is finally all done and dusted, lets take a look at “The Good, The Average and The Bad” from the Fraser Aird signing.

Added Depth At Right Back

When it was reported that Steven Beitashour’s contract option was not picked up by the Whitecaps, it left a lot of supporters panicking about the quality of depth at right back in the first team.

Although he has looked at attacking threat going forward, last season’s up and down performance of Jordan Smith has left people asking whether he can bring quality defending to the right back position.

Carl Robinson has stated that he is looking for both full backs to push up the pitch this season. Smith and Aird both fit that bill. Aird may not be the best defender, right now, but his ability to get up the field and push up the wings should make him a good fit for the team.

Will the converted right winger feel like a defensive liability at times like Smith? With the way the team will play this season, he should be able to do more moving forward than mistakes he makes sitting back.

With the Canadian Championship, Champions League and the games Smith will miss due to yellow card accumulation and Costa Rica national team call ups, there will be plenty of games for Aird this season to get those quality minutes he needs for his career and challenge for the starting spot.

His Right Back Ability

From reports out of Scotland on Aird, it looks like he struggles at times with his defensive ability on the pitch. Yes, he can push up the pitch, but how good will he do with a player like Robbie Keane running at him down the wing. That being said, being Canadian, he will likely be given a longer leash by some supporters than that which was given to Smith during last season.

Let’s see how well he can make great plays to offset any defensive mistakes he will make (and every defender will likely make some of those over the course of the season).

The more he impresses the 21,000 in the stadium with his offensive ability, the more they will let him make some mistakes here and there on defence.

Supporters Expectations Of Where Aird Should Fit In

Some people will think that just because Aird is a player called up to the Canadian national team that he has to be the starting right back on this team, but right now, that spot feels to be Smith’s to lose and Aird’s to try and win.

Last week I ran a twitter poll about what the supporters’ expectations would be if Aird joined the Whitecaps. The poll results can be seen below: 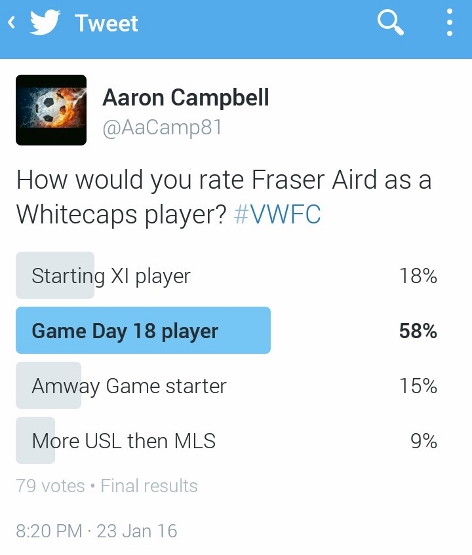 I have to say that I found the results a little surprising. Overall, it seems that Aird will be welcomed in Vancouver with open arms, with the majority of those answering the poll seeming settled in the notion that he will be more of a squad player and they’re happy to see him here.

How long will the good faith last? Well that’s up to Aird now to show that he has the qualities to play regularly, and make a valuable contribution, in Major League Soccer and make that loan deal from Rangers a permanent transfer.

We wish him well.