One of the most noticeable features of the recent open training sessions was the positional flexibility Stephen Hart and his coaching team demanded of the squad. Strikers became midfielders, defenders became wingers, and Zachary Sukunda became… everything. All at once. A live-action Inspector Gadget with sixteen legs and a propeller hidden in his hat.

It was interesting then, that two players were exempt from this rotation. Playing alongside one another in central midfield for every minute of action were Elliot Simmons and Andre Rampersad.

As a pair, they have complimentary attributes. Simmons, a holding midfielder, operates as a conduit for the game to flow through. He’s a ubiquitous presence, a player who appears to be both in possession of the ball and available for a pass simultaneously. It’s these contradictory qualities that allow him to subtlety control the tempo from the base of midfield.

Rampersad, on the other hand, is more of an all-action presence. For his former club FC Santa Rosa, he was a dynamic force. Adept at winning the ball deep and driving his team forward, the Trinidadian has attributes that should transfer well to a more North American style of football. It’s no surprise that Derek King, his former head-coach and now assistant to Stephen Hart, was so keen to bring him to Halifax.

As a unit, Simmons and Rampersad offer an interesting mix of energy and control. In a part of the pitch where games are won and lost, Hart and his coaching team will be looking for the pair to act as the perfect counter balance to one another. The fact that they’ve persevered with the two of them this far into the training camp suggests they’ve liked what they’ve seen.

Should Elliot Simmons be unavailable at any point next season, Wanderers have a ready-made replacement waiting in the wings to take his place. He’s a local lad, too.

Scott Firth, the seventeen-year-old who dashes off to school once training is over, has made an impressive start to life as a professional footballer. 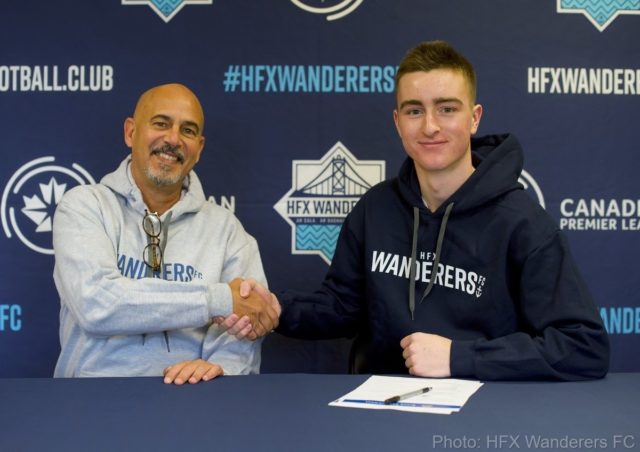 It was surprising to see how composed he was last week. Among men, the Halifax youngster didn’t seem out of place. Stylistically, he’s a distant cousin of fellow holding midfielder Elliot Simmons, with both appearing to share a Sergio Busquets-shaped common ancestor in their evolutionary gene pool.

If Elliot Simmons becomes as pivotal to this team as some expect, it’ll be handy to have a facsimile ready to step in and take his place. In Firth, Wanderers have just that.

Completing the quartet of central midfield contenders are Elton John and Kouame Ouatarra.

John, 31, brings much needed experience to the Wanderers midfield. With a decade-long career as a professional, and a CV that includes over ten CONCACAF Champions League performances, Hart will look to his fellow Trinidadian to be an old head among his younger peers.

At the opposite end of the experience spectrum is Kouame Ouatarra. The Ivorian’s story is one of the more endearing to come out of the league’s first-year signings. After a failing to make the grade during a trial with Levante in Spain, Ouatarra had given up on the idea of playing football professionally. But after a friend convinced him to attend the open trials, he found himself signed to a pro-contract.

Nicknamed ‘The Beast’ by the coaches during last autumn’s trials, Ouatarra brings a robust, no bullshit quality to the Wanderers lineup. He was dominant over the course of those two September days, playing with the determination of someone who’d been unexpectedly gifted a second chance. The defender-turned-midfielder hustled, harried and stamped his authority on proceedings. If he can adapt to the level required, Hart could have a very useful squad player on his hands.

Where HFX Wanderers still look a little light, is in attacking midfield.

Kodai Iida and Juan Diego Gutierrez aside, there’s a noticeable absence of players able play at the tip of a midfield three (no matter how Wanderers set up, 4-3-3, 5-3-2 etc, it’s hard to see past a three-man midfield). Akeem Garcia could conceivably drop in as a no.10 but is more likely to play on the right side of an attacking three if his previous relationship with Derek King is anything to go by.

Until there are more signings, that leaves a big creative burden on Kodai and Guti.

On the surface, they’re similar players. Both are technical, creative, and intelligent. Both are adept at playing in half-spaces in the final third. And both are forever prompting and probing, perpetually searching for a gap to open up in front of them; a crack of daylight through which a pass can be threaded.

The big difference between the two is their experience. While Kodai’s career has hovered around the NPSL level (largely recognized as a fourth tier US league), Guti has spent much of his time in the top tier of Peru, along with spells in Denmark and Sweden.

Based on first impressions, it looked like it’d be one or the other as a starter for Wanderers.

This view has been slightly reworked since watching Kodai in action though. He’s good enough to start in this league. Whether that’s as a no.10 or on the left side of an attacking front-three remains to be seen, but he’s not simply the squad player that many had him down as.

Whether or not this is a position that will be added to is unclear. Should it remain the same, Hart will feel quietly confident that come April the seven midfielders he has at his disposal will be enough.