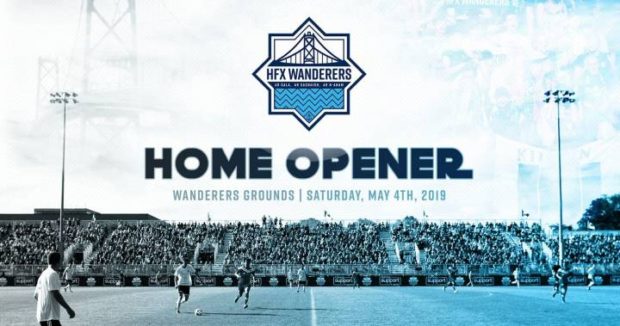 And just like that, in a haze of blue smoke and crisp east-coast air, it was over. HFX Wanderers FC 2 – 1 Forge FC. An 81st minute Luis Perea strike the difference on a wild, delirious afternoon in Halifax, Nova Scotia.

The scenes during the aftermath of the match-winning strike will live long in the memory. The players charging maniacally towards the touchline; The Kitchen a pulsing, ecstatic mass; the Wanderers Grounds electric.

It all came from a poor defensive clearance.

As the game entered the final 10 minutes, a hopeful cross from the excellent Ndzemdzela Langwa was carelessly cleared into the path of HFX Wanderers’ marquee signing, Luis Alberto Perea. The Colombian, at full stretch, still had a lot to do. With three Forge defenders in front of him, and a diving Triston Henry at his feet, Perea found a slither of space to guide the ball through. Cue pandemonium.

It hadn’t always looked like it was going to be this way though.

Wanderers had started the game in a similar manner to last week’s defeat at Pacific FC. The occasion seemed to weigh heavy on some of their shoulders. Passes were misplaced, defensive errors nearly punished.

Repeatedly Forge threatened in the opening 15 minutes, and were it not for some poor final balls, they could’ve inflicted significant damage.

But unlike last week, Stephen Hart’s side managed to shake off the nerves and start to assert their authority on the game.

Elton John began to dictate things in his own quiet, understated way. The Trinidadian was the conduit Wanderers played through; forever available, never overwhelmed. At times he resembled a stoic New York traffic warden, calmly directing vehicles as a frantic carousel of cars swirled around him.

Ahead of him, Kodai Iida performed his own unique interpretation of an all-action central midfielder. With Wanderers in possession, he played at the tip of a midfield-three. Without the ball, he became a second striker, joining Luis Perea in the first phase of the press. It was this energy and drive the led to the opening goal, when 30 minutes in he was hacked down by Daniel Krutzen on the edge of the box.

The resulting free-kick was struck well and the ball deflected loose off the Forge wall. First to react was Akeem Garcia who steered the ball to the goalkeepers’ right and into the back of the net.

1-0, and it stayed that way until half-time.

Fresh from an earful from Bobby Smyrniotis, Forge started the second half brightly and Kyle Bekker began to stamp his authority on the game. It was an admirable performance from him, really, given the fact that his elbow had been viciously assaulted by Joseph Di Chiara’s head only one-week previously.

In the 48th minute, he struck the crossbar from a free-kick.

After finding space inside Wanderers’ 18-yard box, the lively Kendell Thomas received a pass from Chris Nanco’s and shot through the arms of Jan-Michael Williams into the back of the net. The Trinidadian ‘keeper will know he should’ve done better.

Moments later, Thomas nearly got in again. A dangerous pass across the box was inches away from the young striker who was chasing his 3rd goal in two games. Shortly after, another let off, when Emery Welshman misplaced a pass that would’ve seen Bekker through on goal.

Attacks were coming in orange waves now and the Wanderers midfield was looking tired and overrun. Some changes were required.

On came Andre Rampersad for Kouame Ouattara, followed shortly after by Scott Firth for Elton John.

And soon enough, Wanderers were wrestling back some control. Rampersad brought a bustling energy to the midfield. Firth, too, despite getting caught in possession once or twice, was playing as if he’d been a professional for more than the past three-months as he hustled and harried the Forge midfielders.

And Akeem Garcia, who’d been excellent in the first-half before fading, found a second wind. Repeatedly he drove down the right side, pinning Forge’s defenders back. Mohammed Kourouma, on the opposite flank, was also a threat, and in the 67th minute shot narrowly over from the edge of the box. Wanderers pushed on.

Perea, who admitted afterwards he was only 60% fit, pressed the backline relentlessly, his heat map growing redder by the second. Rampersad and Firth, too, started playing a few yards further forward, squeezing Forge back.

The final change came in the 77th minute, with the excellent, exhausted Kodai Iida coming off for Juan Diego Gutierrez. It was a brave change by Stephen Hart. With legs tiring, many coaches would’ve opted to bring on a more defensively minded player. After all, a point against Forge, many pundit’s picks for the championship, would’ve been seen as a good result.

Hart, though, had different ideas. The introduction of Gutierrez kept Wanderers on the front foot, and in the 81st minute the breakthrough came. Luis Perea, who by this point was running on empty, reacted first to a headed clearance to slot the ball home and send the Wanderers crowd into delirium.

There was still time for one more Forge chance with Emery Welshman forcing Jan-Michael Williams into a fine, redemptive save, but led by the centre-back pairing of Peter Schaale and Chrisnovic N’sa, the home side hung on.

When the final whistle came, euphoria.

Around the ground, in a fog of blue smoke and noise, over 6,000 fans celebrated.

On the pitch, several of the players dropped to the ground, completely spent. The rest danced.

And so it was that a grey, chilly day on the east-coast of Canada had conjured up the warmest of spectacles. HFX Wanderers FC had arrived, and Halifax, Nova Scotia was ready.