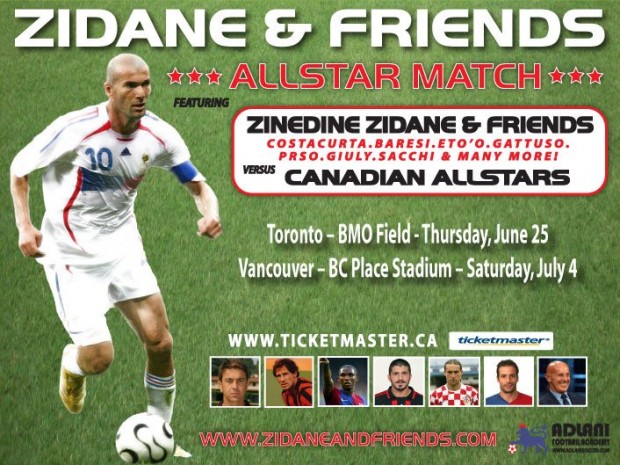 A certain few players can rightly be classed as the top players of their generation. They’re worshipped during their playing careers and beyond, but what happens to the man when that career ends?

What do they do to occupy those football playing free days? To fill that void some go into management (to various degrees of success), others throw themselves into broadcasting and media work, some fall to the temptations of drink and drugs. If you’re Pele you sell the wonders of Viagra.

In Zinedine Zidane’s case it appears you spend your summer in Canada as part of a three game circus. 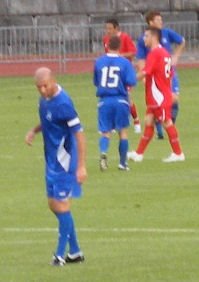 Zizou has contented himself with playing in charity games since his retirement. Whether his experience in Canada this summer will change his outlook on such games is now debatable.

How Zidane got roped into taking part into what many fans feel has been at best a rip off and at worst a scam is the big question now hanging around.

At the end of April a group I’d personally never heard of before, Adlani Soccer Ltd, announced that they were putting on three charity football matches across Canada in June and July. It was to be an “All Star” match featuring Zinedine Zidane and Friends.

Have a look at the original web flyer below. The chance to see the likes of Paulo Maldini, Franco Baresi, Fabian Barthez and Samuel Eto’o on the pitch at the same time would have been a mouthwatering proposition. Many felt likewise and bought tickets expecting to see these stars. Sadly, or read luckily, I couldn’t go as I was off to see Green Day the night of the Vancouver game. Ah well. Phew more like. The initial ticket price of up to $99 had made me baulk anyway and if I had been able to go then it would have been the $29 tickets for me. That’s the tight Scot in me of course!

Questions started to be asked right way, the main one being would any of the players actually turn up? The answer was no. Well, all except Zidane of course and the whole thing became less a case of “Zidane and Friends” and more “Zinedine Zidane and a selection of people he’s not long met and the crowd haven’t heard of”.

When the first game of the tour took place in Toronto on June 25th everything became clear. These were no all stars. People had paid top dollar to see a sham, with the only other player of note being late addition, Argentina’s Martin Palermo. 10,152 paying punters in fact and they weren’t happy. 15,010 fans turned out to the event in Montreal three days later, the French population holding Zidane alone in high esteem.

Organizer Ahcene Adlani has blamed the problems on a lack of co-operation from the Canadian Soccer Association and other groups.

The Vancouver date on July 4th was already in doubt many felt. It was a 60,000 capacity venue and only 8,000 tickets had apparently been sold – and that was with the lure of the international stars. People were also starting to ask for their money back as they weren’t going to be getting what they had bought tickets for.

The whole thing was developing into a farce more each day and this culminated with the announcement on July 2nd that the the game was cancelled. Or rather, temporarily postponed.

The reason? Well keeping well in with the whole theme of things, Zidane had injured his back lifting his child whilst watching a fireworks display in Vancouver on Canada Day!

The game was quickly rescheduled to July 12th and the moved to the much smaller 5,200 capacity Swangard Stadium. Now it was just advertised as Zinedine Zidane and Vancouver All Stars and tickets were now $50 and $25.

As the game approached, and with seemingly very little in the way of advertising or media publicity, ticket sales were slow and a few days before game time were announced at being between 700 and 1000. Promotions were announced on the Adlani website. On the day before the game, if you bought a pair of tickets you could get grandstand for $40 each and bleachers for $25. On game day itself this offer had changed to $30 and $20 respectively. Desperate measures?

Well it seemed to work because a crowd of around 4,000 attended the game last night. the bleachers were pretty much full and the grandstand just under three quarters full. But to see who? 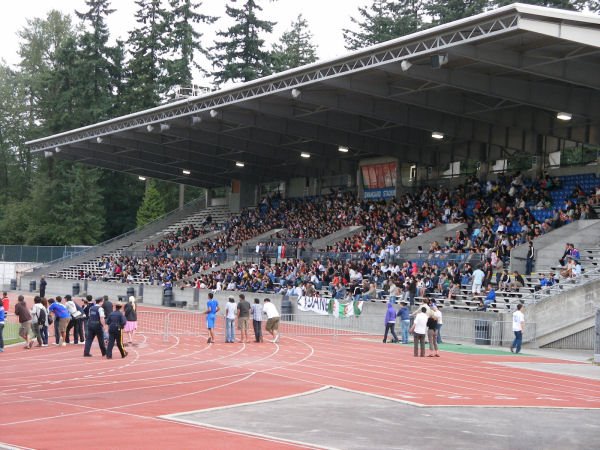 It had been rumoured that the Vancouver players would consist of three former Whitecaps in Alfredo Valente, Steve Kindel and Jeff Clarke. None were in the line ups, although there was ex TFC player Tyler Rosenlund and former East Fife player Emilio Bottiglieri! So that’s what Mel’s up to now. I bet he never thought when he was touring the shitholes of Scottish lower league football that he’d be on a team alongside Zinedine Zidane one day!

I went up for a nose and if I’d been offered a ticket for $10 would have gone in, but ended up watching the first 25 minutes of proceedings for free from the fence around the stadium. That was enough. Saw Zizou, who still has it and could definitely still play, and he set up a great goal and went on to score a hat trick. It was all sadly going through the motions stuff and a shooting in goal fest (I believe it finished 10-7). 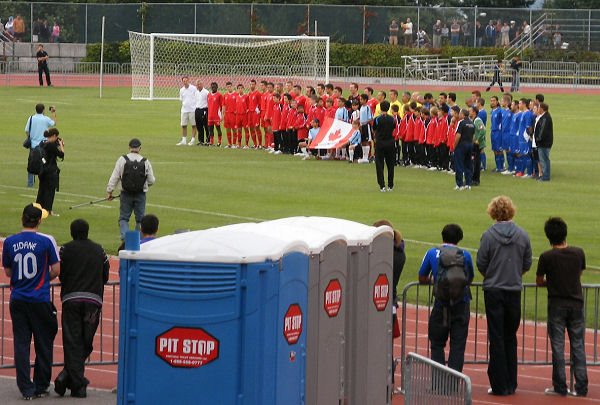 I saw enough and felt I’d had good value for money! I’m sure that those inside enjoyed it. They turned up, in Vancouver any way, knowing just what they were getting – Zizou. Shirts, banner and Algerian flags were everywhere, as the crowd chanted his name over and over. I don’t think I heard any English spoken from any of the fans in my whole brief time there!

Adlani had said that Zidane had waived his fee for the match, a fact then when asked seemed to not be the case as far as the French star was concerned according to TSN.

There’s a number of sad things about this whole event.

First off, all those fans in Toronto and Montreal who paid good money and didn’t see the stars they wanted. One person reportedly spent $1600 on VIP seats. There’s been talk of a class action lawsuit.

Then you have the whole charity aspect. It was stated that proceeds from the games would go to Unicef. You always wonder just how much proceeds means and Adlani confirmed last week that, for the Vancouver game at any rate, a whole 2% of the proceeds would find their way to the charity.

There’s also the damage to the repuation of Canadian football. It was interesting that none of the big three Clubs wanted any part of the thing. Neither did the CSA. Canadian football and it’s fans are not at fault but it’s the lasting stigma that this debacle will leave in it’s wake. It will just make people wary of any future endeavours, no matter how genuine and unless it has the backing of the Caps, TFC or Impact.

The biggest loser in all of this has to be Zinedine Zidane though.

He is still clearly an idol to his community. He is still worshipped and admired and a figure to look up to, to the Algerian population especially. He’s had a great career and, headbutts aside, been an inspiration to many and one of the best players of his generation and perhaps all time.

His reputation has been tarnished by this though. How much he actually had to do with anything and how much of a paycheque he has taken we will probably never know. It was interesting that there was no mention of any of these games on his official website though.

He should have left us remembering the good times.