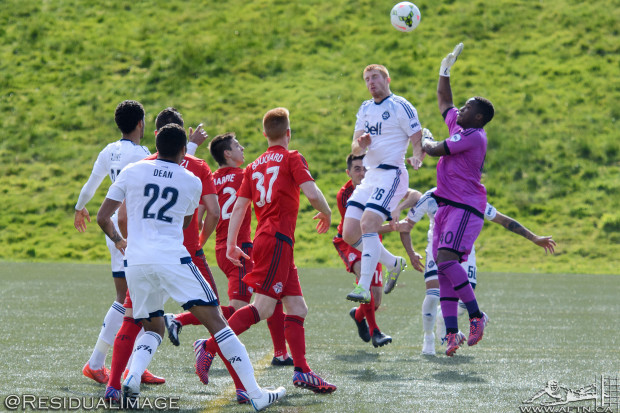 Vancouver Whitecaps seem to be regularly clocking up quite a number of firsts under Carl Robinson. They’ll have another one this weekend – the first home double header of the year.

Both Whitecaps teams are in action on home turf this weekend, with the MLS side hosting DC United at BC Place on Saturday evening and the USL side hosting a Cascadian derby against Sounders 2 on Sunday afternoon.

It’s the first time that we might get to view just what kind of dynamic Robinson sees between his non MLS starters and the USL team on such double home weekends.

Does Robbo keep the same guys moving between the two squads or is this his chance to get other players valuable competitive minutes and stay match sharp, no matter how experienced or inexperienced they are?

Last week was a prime example of how one team being home and the other away had an effect on individual players. Robinson told us earlier in the week that he would need to make his mind up about who he wanted to take down to Utah with the MLS side and who would get valuable playing time back in Vancouver with WFC2.

What that meant was that both Tim Parker and Christian Dean stayed home and played the full 90 minutes in the match. Great for their development, as the chances of them seeing any playing time against Real Salt Lake was slim. The downside of that was that the ‘Caps then travelled to RSL with no center back on the bench and when Pa Modou Kah got injured late in the game, you were fearing the worst if he couldn’t continue in the match. Thankfully it never came to that.

Another player affected, this time negatively, was Kianz Froese. The young homegrown midfielder made the trip to Utah but wasn’t named in the gameday 18 against RSL. With the MLS team getting back just after kick off in the USL match, that meant no minutes for Froese at all this past weekend.

This weekend is a whole different story, as Robinson and the Whitecaps have a whole host of options available to them and with competition for places so fierce amongst the MLS team right now, and obviously positions limited, there’s a good chance that we could see player like Kekuta Manneh, Erik Hurtado and Deybi Flores getting possibly no, or at best a few, minutes against DC United on Saturday. Then there’s also guys like Jordan Harvey and Gershon Koffie who are unlikely to get on the pitch.

If that’s the case, what would be the chances of seeing these played suit up for WFC2 on the Sunday?

It’s something that Robinson isn’t ruling out, but at the same time he feels playing in USL might do more harm than good for some of his squad.

“It’s possible because we’ve got the ACC tournament in mind,” Robinson told us. “In two week’s time there’s going to be Saturday, Wednesday, Saturday, Wednesday games. So I need to make sure I’ve got enough numbers for that, because I will freshen it up in those games.

“I’ll speak to my senior players because these games are important to match fitness but they can sometimes also not help certain players. But if I feel it’s right for certain players to play, then they’ll certainly play. I won’t give them the choice, they’ll play.”

From that, I wouldn’t expect to see Manneh or someone like Koffie play. Hurtado or Flores? Possibly. But I would expect to see Parker and Dean again, with Froese also getting the start this week.

Sadly there will still be no Marco Bustos, as the young midfielder, who turned 19-years-old on Wednesday, had a CT scan on his injured foot on Thursday and is awaiting the results as to how much longer he may be out. Bustos is moving and running freely, and able to train, but he’s still having pain when he kicks a ball. A tough break, in all ways.

But should the Whitecaps be playing more of the fringe MLS players in the USL team? For me, yes. It’s fine developing the young up and comers with WFC2, but these are the guys that currently have MLS contracts and need to be match fit if suddenly called upon to start for the first team.

There’s times and there’s games, like this weekend, where a derby match will be great development for the fringe MLS guys and a great chance to show Robbo their hunger and their ability to break into his gameday squad.

The USL team has a lot more uses than just throwing some prospects together.

It’s a tool LA put to good use with their LA Galaxy II side last season, and Portland Timbers have announced that Will Johnson will play his first game in six months against Arizona United on Saturday, as he continues his recovery from a broken leg.

With so many non MLS games coming up in the Canadian Championship and the CONCACAF Championship League, getting all the players match sharp is a must.