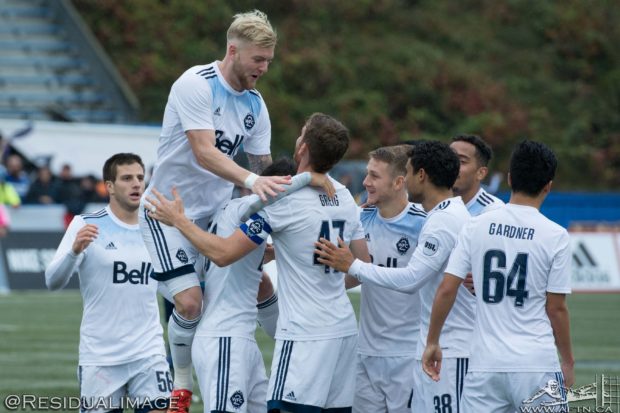 Following on last week’s “Keep, Trade or Release” features on the MLS team, we turn our attention to the USL side and some of the tough decisions that lie ahead for Alan Koch and his management team with regards the futures of many of their squad.

We’re going to do this slightly different as part of a new feature called “In, Out, On The Bubble”, and Aaron and Steve are going to be writing their own pieces around the MLS team later in the week (and may be what we do with our player analysis going forward).

It was a fantastic second season for the USL side. A Western Conference final appearance came on the back of a much improved set of results that saw the ‘Caps increase their tally of points and wins.

The performances of Alphonso Davies and Brett Levis saw them earn MLS contracts, with a number of others playing first team minutes in the Champions League and Crystal Palace friendly, and a slew of young players getting strong developmental minutes in USL play.

All in all, a great year, but the hard work begins now to improve on that further next season and to do that, a number of players will not be returning.

The personnel changes between year one and year two were huge, and there will be a number more heading in to year three. That will see some long time Whitecaps move on to pursue new opportunities.

It’s clear that a number of players in the USL squad are never going to be knocking on the door of the first team. The question now is do you waste any more time, money, and effort on them in the hope that that changes or do you cut bait and move on in your search for the next big fish? 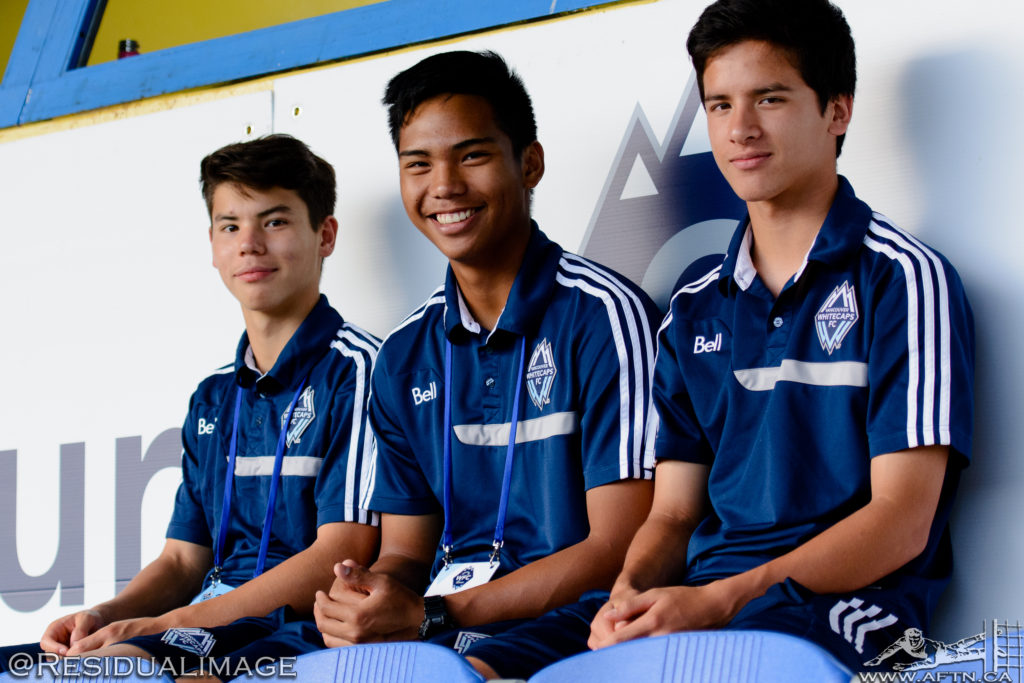 
It’s a pretty clear cut list really from the club side, but some of these decisions may be up to how the players are feeling.

The four young Residency alumni have all had strong years and will be all the better for the playoff experiences they’ve had under their belt and a season of learning on the job. Chung featured the most, but Baldisimo and Gardner put in impressive showings down the stretch and in the postseason. Campbell was used more sparingly as he was pivotal in the U18 team’s run to the USSDA Championship game. Expect all four of them to feature more heavily next season.

Spencer Richey looks a guarantee to get a MLS deal this offseason. If he doesn’t then something’s not right somewhere after two solid seasons under his belt and two first team appearances in the Champions League.

Kyle Greig is also knocking on the first team door and was a feature in CCL play. Robbo wants to have another look at him in the preseason camp. Will he get that MLS deal? Is he MLS quality? If he doesn’t get the contract he’s then faced with the choice of staying here for another season to prove his worth or looking at opportunities elsewhere, maybe even at NASL level. Would be awful to lose him as he bring a lot more to this team than just his goals and contributions on the pitch.

Off the others, Dem de Wit was voted USL Player of the Year, but had an up and down second half to the season after a strong first. He’ll be looking to consolidate that and show continued improvement to try and catch Robbo’s eye. As will Daniel Haber, if he wants to stick around for another season at this level. And Will Seymore has the potential to keep improving and impress.

I can’t see Diaz not coming back. He only joined the club in the middle of August, so we’ve not seen anywhere near enough of him in the limited minutes that he’s had, mostly as a sub, to make any decisions as to what he offers. A lot may depend on what he’s been told when he signed. Was he signed with a view to a MLS deal? Will he want to be used sparingly and out of position? Tough one.

Likewise with Deklan Wynne, who has a lot of potential but as a New Zealand internationalist, he may want to look to play somewhere where he can be a starter.

Sean Melvin’s had a solid season and should continue to split minutes in goal, while Chris Serban will look to bounce back from a season that’s seen him with some injury issues. 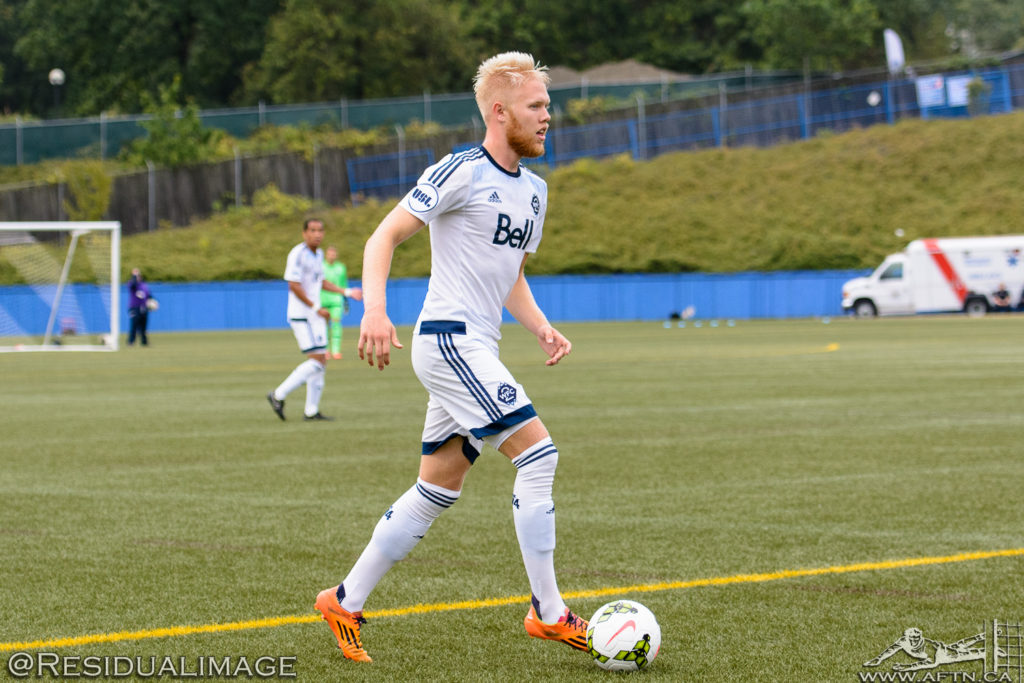 JACKSON FARMER – After two USL seasons, it’s time for the Residency alumni to move on, for the sake of his own career. He needs to be playing regular minutes, ideally as a starter, if he is to continue his development. He’s not getting that here and only made 10 appearances for 882 minutes all season. He’s regressed and right now looks far away from being anywhere near MLS ready. It may come, but if it does, it will need to be achieved away from Vancouver.

GIULIANO FRANO – He’s made 25 appearances this season, which seems strange as we’ve hardly noticed him. The kind of unflashy defensive midfielder that does the hard work but gets little recognition for it. Was brought in to add a little experience to the team while the young Residency guys got a season and games under their belt. Now that they have, can’t see any reason to keep him around.

ELLIOT GREEN – Not really sure what the ‘Caps saw in the Englishman to begin with to be honest. Wasn’t even in the mix until Cole Seiler was called up to the first team in the summer. Didn’t instil much confidence when he finally got his chance to play and de Wit was noticeably worse alongside of him. The ‘Caps poor defensive play also started to happen around this time. Coincidence? Maybe, but he needs to go.

JORDAN HAYNES – We had Haynes pegged to be released but it would appear that the Residency graduate announced it himself last week.

I want to thank everyone that made my time in Vancouver special, will never forget my time here, through the good and the bad. Thank you Van pic.twitter.com/E5wS5Bryd3

Best thing for him. He only saw limited time this year, playing 428 minutes in just 14 appearances. He did bag a goal, but this level seemed a step too far for him and he needs to continue his development elsewhere. An ideal player for the new Canadian Premier League you have to feel.

FATAWU SAFIU – Has been my disappointment of the season. I had high hopes for what Safiu would offer the team after some electrifying performances for Portland last season. The Timbers letting him go should have been the first alarm bells. He clearly has talent and a sweet delivery, but has been too selfish at times on the ball, and hasn’t had the offensive contribution we expected. Four goals and three assists from his 25 appearances would seem to indicate he’s done not bad, but it’s frustrating to know he could have done so much better.

SAHIL SANDHU – A reliable squad player at this level, but this is clearly as far as he’s likely to go, so it’s time to let some new blood come in to that role. Had 11 appearances on the year for 303 minutes.

MITCH PIRAUX – It’s been another tough season with injuries for Piraux. After recovering from last year’s season-ending one, we looked forward to seeing what the Residency graduate could bring to this level. We still don’t know. He made three appearances before injury struck again. There has to be some serious concerns about his footballing future if this keeps up. I would hope that the ‘Caps will keep him around for another year, but wouldn’t be surprised if he wants to look somewhere else just to get the valuable minutes he now needs after missing the past two seasons. 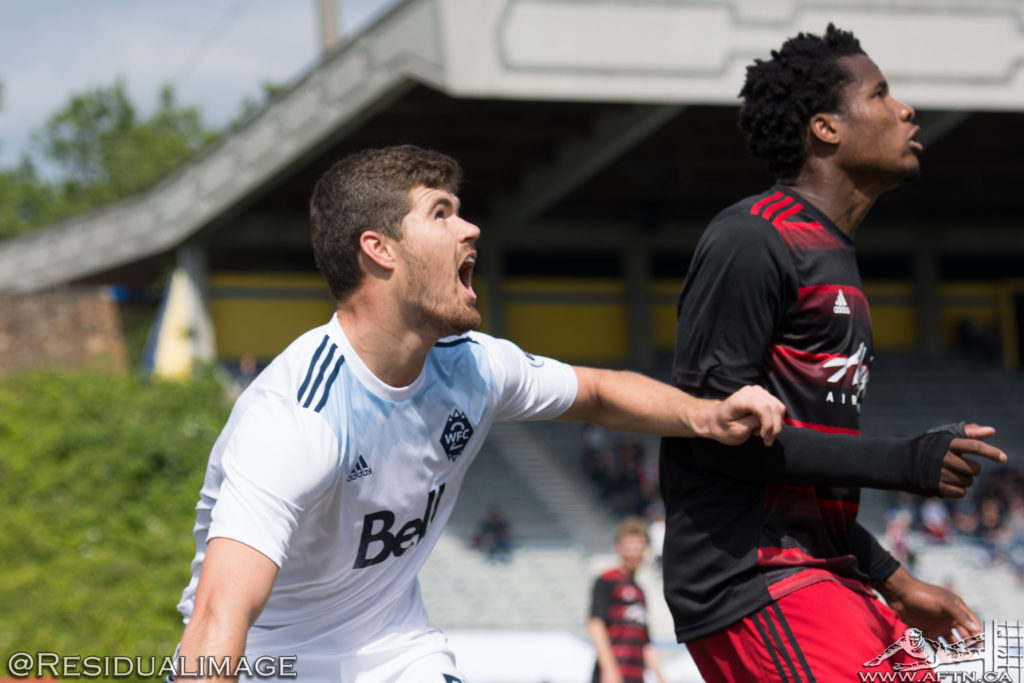 THOMAS SANNER – I like the big striker and he only officially signed pro forms in June, which makes me think he’ll stick around. He contributed well, with four goals in his 20 appearances, but he still looks raw and a little bit tactically naïve out there. His height advantage and sheer hustle helps overcome that. I guess it all now depends on what the ‘Caps see in him with regards to the future and how much ceiling they feel he has training a full year in a professional environment. It may also depend on who they pick up in the draft and who performs best during preseason.

MARK VILLAGE – Village is a solid keeper, as he’s shown with his displays with Surrey United Firefighters these past few seasons. He’s the fourth one on the books for the ‘Caps and is a regular at training, which helps when the likes of Richey are up training with the MLS squad. As long as both parties are happy with the arrangement, I can’t see why this would change.

There’s likely to be another strong influx of talent coming into the WFC2 squad ahead of next season’s campaign. Some of those will come from the MLS SuperDraft (Alan Koch is already out east watching college games), while others will come from various talent and scouting the ‘Caps have undertaken this past year.

After picking up Kyle Greig from OKC Energy last season, you have to wonder what other USL players may be tempted by a move to Vancouver, especially from non MLS2 teams like the Energy. With Marc Dos Santos leaving Swope Park Rangers, will the ‘Caps swoop on Swope to pick up any of their Canadian talent?

It will certainly be interesting to see how that all plays out, but what is almost a certainty is that there will be further additions from the Whitecaps Residency program.

The two most likely candidates to earn a pro deal are center back Joel Harrison and midfielder Michael Baldisimo. Both have already made their USL debuts as academy call-ups, with Harrison making three appearances and Baldisimo one. The ‘Caps are high on both players and depending on what they want to do collegewise, we expect both will be offered pro deals in time for next season.

Whitecaps Residency striker Gloire Amanda is another who may find himself offered a pro deal, depending on his college aspirations, while the ‘Caps are also high on striker Alan Camacho, who led the USSDA in scoring last season and has already made one appearance with the USL team this summer.

Tags: player analysis, USL, Vancouver Whitecaps, wfc2, In Out On The Bubble