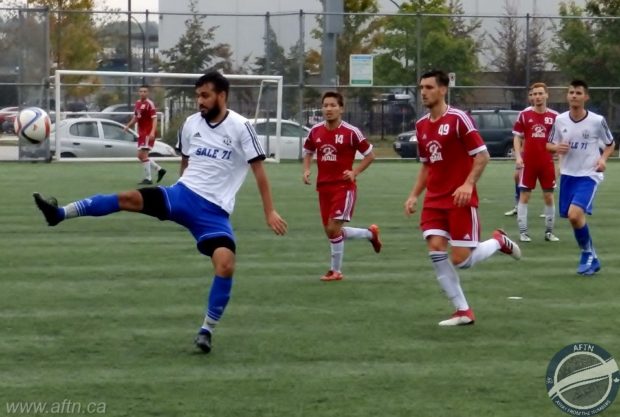 And then there was one.

Three weeks into the new Vancouver Metro Soccer League (VMSL) season, and Club Inter EDC Burnaby are the only unbeaten team remaining in what is already shaping up to be one of the most competitive seasons in recent years.

Inter made it three wins from three with a 5-0 trouncing of the still pointless Campo Atletico at Burnaby Lake on Friday night, taking their goal tally for the season to 11 so far, with no goals yet given up.

Mohammed Habib took his own personal tally to five with a goal in this one, with Sebastian Crema, Marco Visintin, Colin Streckmann, and Nicolas Budisa getting on the scoresheet for Inter’s others.

Campo remain rooted at the bottom of the table, yet to find their first point of the season and with a goal difference of minus 10 already. It looks like a hard slog is ahead for the team that narrowly avoided relegation last season in their last match, but they’re certainly not alone with their early struggles and are one of three teams still looking to get off the mark.

Amongst them, perhaps somewhat surprisingly, are Pegasus FC, whose troubles may soon go beyond having no points yet in the new campaign.

The Horsemen fell to a 5-3 defeat to fierce Surrey rivals, and last year’s VMSL Premier Champions, BCT Rovers Tigers United at Newton on Friday evening. Or at least that’s how things currently stand in terms of the result, with the referee forced to abandon the match after things got our of hand when Pegasus’ Chetan Jhooty was sent off and reportedly refused to leave the technical area amid abuse of the officials.

A brace from Pavi Dhillon, and goals from Nick Soolsma, Cam Hundal, and Harpreet Khakh has seen Rovers Tigers on their way to the three points before things blew up, with former WFC2 player Sahil Sandhu hitting a brace for Pegasus and Dilpreet Atwal getting their other.

The result will stand, but what additional punishment handed out to Pegasus remains to be seen, but it’s more likely to be a fine than any points deduction, which is lucky for them!

The other Friday night game produced, perhaps, the first shock of the weekend, with the previously unbeaten CCB LFC United going down at home to a 2-1 loss to Coquitlam Metro Ford Wolves. Carlo Basso and Carson Gill got the goals for the Wolves, with Yassin Essa getting his first of the season for the home side.

Inter meet CCB at Burnaby Lake on Friday night in the match of the weekend. Kick off is 8.10pm and that should be a tasty encounter not to be missed.

CCB and Metro Ford are two of the seven teams sitting on six points from their first two matches, with a real logjam in the standings at this early stage of the season. Rino’s Tigers are another one of those sides following their 3-1 win over newly promoted Guildford at Trillium on Saturday afternoon. 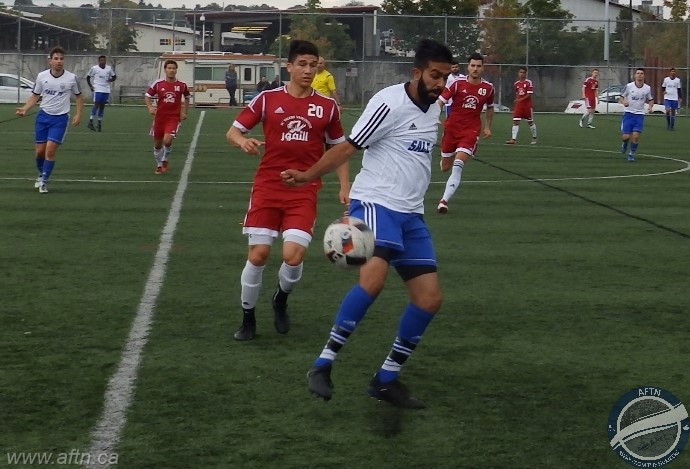 Rino’s were made to really work for their victory in a game that saw them dominate for most of it, but only making sure of the three points once both teams had gone down to ten men.

Declan Rodriguez had given the Tigers a 15th minute lead, getting on the end of a low cross from close in before the keeper could get a hand to it. You felt that they’d go on to comfortably win this one against a Surrey side still looking for their first point of the season, but full credit to Guildford who kept attacking and got back on level terms with a fantastic looping effort from Nicolas Favia five minutes into the second half.

Rodriguez hit his second though in the 67th minute to fire Rino’s back in front, and when Rajdeep Sandhu saw a straight red a minute later for what appeared to be a stamp on a Rino’s defender down in the box, the writing was already on the wall for Guildford.

Rino’s had a string of chances to add to their lead, but went down to ten men themselves two minutes from time when Uriel Herrera picked up a second yellow card, made more frustrating for Tigers coach Blaise Nkufo due to the first being for kicking the ball into the net after being flagged for offside.

If Guildford thought this may give them some hope to grab a point, it was quickly extinguished in the 90th minute when Daniel Johnson sealed all three points for Rino’s, showing fantastic footwork in the box to waltz past three defenders before firing home from a tight angle.

You can see all three of Rino’s goals, and some other highlights from the match, in our video below. Unfortunately we missed capturing Guildford’s goal as we were moving position, ironically for a better view!, at the time.

A Tyler Leonard goal gave West Van a 1-0 win over the previously unbeaten Croatia SC at Ambleside on Saturday afternoon, with the visitors day made worse with the sending off of Jason James.

The final Premier action last weekend took place in North Vancouver, with newly promoted NVFC Norvan making it back to back wins with a 3-1 victory over Richmond FC Hibernian. Connor Dennehy hit a brace for Norvan, with Marius Ciobanu grabbing their other. Brad Caldwell grabbed his fourth of the season for Richmond’s counter.

All those results see the VMSL Premier Division standings as follows after week three of the new season:

There’s some cracking games coming up this weekend. You can find all the fixtures, results, and standings on VMSLsoccer.com.

Also we want to give a special mention to TSS FC U21’s who are sitting top of the VMSL U21 Division in their first season in the league. Saturday’s 4-1 win over Snipers FC made it three wins from three, and they are the only team left in the division with a 100% record. Next up for TSS is a tough one against Faly Academy at Empire on Saturday afternoon. Kick off is 2pm and I know a few of the TSS Rovers Swanguardians supporters group plan to get out to that one.