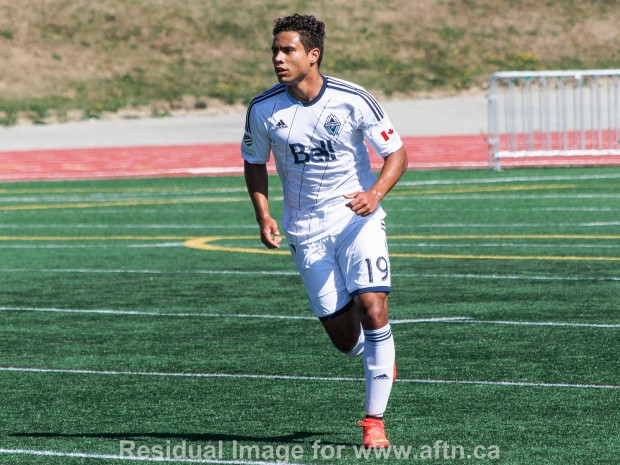 When Kianz Froese made his MLS debut for the ‘Caps in front of 55,765 fans in Seattle in October, you knew there and then how highly Carl Robinson rated his young homegrown midfielder.

To throw the 18-year-old on at half time in a red-hot derby atmosphere would faze many, but not Froese, who looked calm and composed throughout, although his heart must have been beating nineteen to the dozen.

As we now know, that composure wasn’t simply a one off. Froese, who turned 19 today, has made three substitute appearances for the Whitecaps so far this season and hasn’t looked out of place in any of them. In fact, he’s looked a difference maker and added some spark to the Vancouver midfield each time he has come on.

Froese looks like he’s been playing MLS for years, but ask him how he feels about that and he just shrugs it off in an equally composed, non-fazed manner, although he does feel he has adjusted well to the noticeable step up in quality from Residency to first team level.

“I just feel that every game is another focus,” Froese told AFTN at training this week. “Just refocus on the task in hand. It’s just like playing, training here, playing a game right. It’s what I do every day and I try to do that on the field.

“It’s definitely faster and there’s more pressure to play. When you go on the field, results matter a lot more.”

Froese’s latest appearance came in the final ten minutes of the dismal display down in San Jose. He was one of the few bright spots for Vancouver in the game
and Robinson said immediately after the game that he felt the young midfielder’s performance had given him something to think about in terms of his future squad selection.

And it was something he expanded on further in his first press scrum of the week.

“He’s been great coming off the bench and he was again on Saturday,” Robinson mused. “In a dull match, he was the spark. Subs are there to make impacts and differences. The challenge is then when they get their opportunity in the starting line-up, can they have the same impact?

“Sometimes that doesn’t happen, so it’s easier for a sub to come on sometimes and change the game. But he’s doing himself a lot of favours at the moment with his performances coming off the bench.”

Robinson doesn’t want to rush Froese and is happy using him in the sub role just now, loaning him to the USL side for additional valuable minutes. This past weekend saw Froese turn out for ten minutes for the MLS team on Saturday before heading down to start and play 77 minutes in Sunday’s 2-0 loss to Orange County Blues in USL action.

And you can expect more of that double dipping as the season goes on.

“I sent Tim Parker and Kianz after our game on Saturday to go and play in the game,” Robinson said. “It’s important for them. It wasn’t ideal with regards travelling on Sunday morning to play in a game Sunday afternoon, but it’s important that they get match minutes as well.”

Playing two games in a weekend is nothing new to Froese. He’s been doing it with the Residency in the USSDA for the past few years. This is obviously at a much higher level, coupled with a long drive between San Jose and Irvine inbetween, but as you’d expect, the midfielder takes it all in his stride.

“I knew I needed to go down to USL for minutes,” Froese told us. “It’s good for me and I tried to give it my all in terms of how I performed and how I played because those games are important for me in how I continue to improve myself.”

What is slightly more difficult from him and all of the MLS guys heading down to WFC2 is the establishment of team chemistry.

The starting line-up of WFC2 has chopped and changed considerably for each game and that will have contributed somewhat to the three losses in their four matches so far.

Froese, and the others, primarily train with the MLS squad. He’s had little time to train and bond with his WFC2 teammates. Arriving shortly before kick off doesn’t help either, but Froese feels that the chemistry will start to come soon between the two squads.

“I think you just take it as it comes,” Froese feels. “You try and develop a chemistry as you play and go on and try and get things going when they’re not going. Everyone can play soccer. It’s kind of a one language type of thing.”

But with 111 MLS minutes already under his belt, it can’t be long now until Froese does get his first start.

He’s itching for it but patient at the same time. But whatever Robinson’s plans are for MLS playing time for Froese this season, it’s not been something the pair have discussed.

“As a young player, you get chances,” Froese added. “I don’t expect anything or to play a bunch of minutes. I just come here day to day and hopefully get a chance to play. He hasn’t spoken with me about that kind of stuff. All I can do is hope and when it comes it comes.”