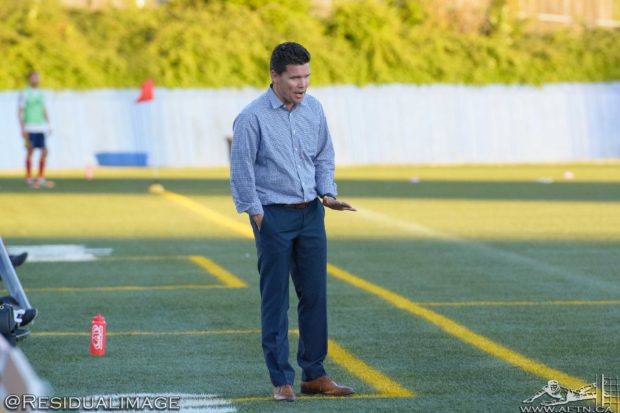 It had to come at some point, unless they were going to go on an unbeaten run like Alan Koch’s Arsenal invincibles, but WFC2’s first loss of the season on Saturday night left a disappointing taste in the mouth.

The young ‘Caps had their chances to open the scoring, but a one-handed save from Eduardo Fernandez off another Ben McKendry rocket, Fatawu Safiu agonisingly failing to connect by mere millimetres at the back post to put away a Daniel Haber cross, and numerous scrambles in the box, conspired to keep Vancouver off the scoresheet.

With the game five minutes into stoppage time, Sam Adekugbe conceded a free kick which saw him pick up his second yellow card of the game. He trudged off, Etiandro Tavares sent the ball into the box, and Frederick Amankona was left unmarked at the back of the box to coolly slot home the winning goal, his first as a pro, and give Real Monarchs the 1-0 win, ending WFC2’s ten-match unbeaten streak in the process.

“A very, very sluggish performance, to be honest,” was WFC2 coach Alan Koch’s take on the game when we spoke with him afterwards. “We spoke about it before the game, wanting to put together the complete 90 minutes, but it wasn’t there at all. We didn’t have the energy from start to finish.

“We had some good moments. We were starting to go at them towards the end of the second half, but you can’t leave it that late. You have to play from the first whistle and play through to the end. Then to concede a goal at the end, give them credit. Good job. They played a good road game. I don’t think we deserved to lose the game, but we didn’t deserve to win it either.”

It’s hard to pinpoint just one reason why the ‘Caps were so sluggish in the game. The hot conditions played a part for sure, as will have the fact that four of WFC2’s starters also travelled and started for the first team in the loss in Ottawa on Wednesday night.

Not a perfect scenario, but Koch isn’t using it as an excuse and says it’s something the players need to learn to handle as part of making it as a pro.

“You fly a long way to Ottawa, two flights, and a lot of those guys played 90 minutes,” Koch said. “Then a long trip back. They were up at the crack of dawn on Thursday, one day yesterday to rest, then play today. It’s very, very difficult but the club wanted us to play them and give them minutes today.

“That’s part of playing professional football. You’re going to have games when you play on the road on Wednesday and you’re expected to play again at the weekend too. So it’s part of these guys development, having to deal with those situations.

“Is it ideal? No. Did some of them do ok? Yes, but some of them struggled. Some of them looked heavy legged. It’s part of their development. Learning to deal with tough games on the road, deal with the travel, then having to perform again, which is all part of what we’re to try and do.”

When the Monarch’s winning goal hit the back of the net, the Real bench exploded, with everyone running on to the pitch. An action which incidentally has seen players banned for a game by MLS, so USL take note!

But the reaction of the visiting players was also a huge compliment to the ‘Caps and shows just how they’re viewed as one of the top teams to beat by the rest of the Western Conference this year.

“Yeah probably,” Koch agreed. “We’re at the top of the table. I don’t know if we’re still there, but we’re right up there and people want to win and play particularly at our place and try and get whatever they can.

“You could see at the end, they were trying to hold the ball in the corner. We do the same thing on the road. Obviously we try to get a point. If we can get three, we’d be ecstatic. Yeah, a bit of an exuberance celebration, but give them credit, they got three points on the road.”

And with it, WFC2’s undefeated streak came to an end after 10 USL games, not to mention their six preseason games!

Disappointing, especially losing it to the last kick of the game, but the way Koch is looking at it, it’s actually a blessing in disguise and he’s keen to see how his squad now bounce back after it.

“It’s a great thing,” Koch said. “To be honest, I wasn’t ecstatic about being undefeated but I’m ecstatic we lost the undefeated record because now it gives us a bit of perspective. You’ve got to go in and fight every single game. There’s no guarantees you’re going to get something out of the game, like we saw today.

“Today, other than the actual match being a lesson, the result is a bit of a lesson for us too. You’ve got to be hungry and you’ve got to go out and play for the full 90 minutes.”

What will want to see now is that hunger and desire to bounce back from the loss in style. That’ll come on Thursday when WFC2 head south to face Seattle Sounders 2 for their first meeting with our Cascadian rivals this season. Let’s hope we see the response we’re wanting.