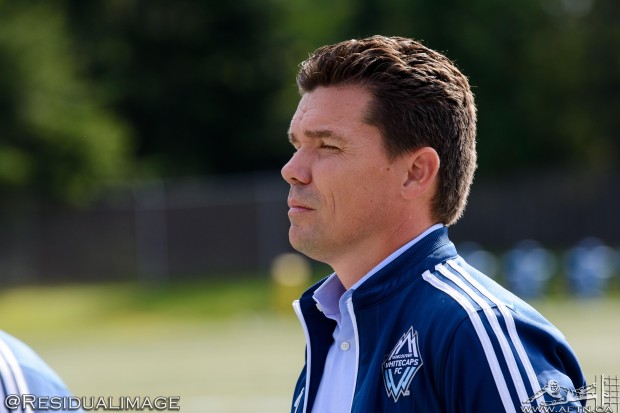 After a testing inaugural USL season, WFC2’s preseason camp got underway at Burnaby Lake last week and it’s already a much stronger looking squad that is getting set for the new campaign.

Stronger and more experienced, after the fast learning curve of 2015. A key core of the squad have remained and some exciting new additions have come in for the new season, which kicks off on March 26th with a trip to California to take on Orange County Blues.

WFC2 coach Alan Koch admits he learned a lot in his first year in charge of the team, one of the youngest sides in the whole league. His players did as well and the team are keen to hit the 2016 season running. They’re already confident, hungry and raring to go.

“It’s obviously early days but we’re very excited to be back after a long offseason,” Koch told AFTN. “We’re excited. We’ve got a good group of young returning players that we’ve brought back, a couple of quality additions that have come in and some trialists and some players have just come to train with us at this stage. So it’s a bit of a hybrid at the moment, but exciting. Everybody’s excited to get on the field.”

It was a tough first USL season for the young ‘Caps, but one which gave Koch and his players some great experience.

The team was put together late and struggled to find their feet and their cohesion in the early going, winning only one of their first eight games. This year, it’s a completely different story, with a successful postseason camp in November already under their belts, and Koch feels you’ll see the difference on the pitch.

“Thankfully this year our preseason is starting a little bit earlier than we did last year,” Koch told us. I think last year we were scrambling and it showed in our first game. This year we’re hoping to be a little bit farther ahead by the time we play our first game of the season.”

As hard as last year was in many aspects, particularly when it came to results, there were a number of standout individual performances. The team is primarily about developing young talent for the first team after all and some players took their chance to impress.

Carl Robinson wanted to see more of those guys first hand, and some, like Levis, have clearly impressed him and put themselves in with a shot of earning a MLS contract.

Although that has meant that Koch won’t get his full WFC2 squad together until later this week, the experience gained from training with the first team and the message such call ups send, can only help the USL team moving forward.

“Definitely,” Koch said. “The nice thing with us having Carl as the first team manager is he’s said he’s wanting to play young players in the first team and he’s giving our guys an opportunity. Guys that have come in and worked hard with our group and now some have had the chance to do it down there.

“It shows the other guys that didn’t go, if they put the work in this year hopefully they’ll get that opportunity at some stage this year or maybe next year’s preseason.”

Koch flew down to Arizona on Friday to take in the ‘Caps games against New England and Houston. With the Tucson friendlies now all done and dusted, his attention turns back to the USL side, who have their first preseason friendly of their own against UBC Thunderbirds on Saturday evening.

Such a hard fought encounter will give Koch, and the fans, a good indication on how the new look WFC2 squad is shaping up together, with both the backline and the attack going through something of an overhaul this offseason.

The ‘Caps USL roster is currently sitting at 17 players. The final additions are expected soon, with Residency standout Alphonso Davies looking in line for a USL deal, along with MLS SuperDraft picks Chris Hellman and Thomas Sanner.

Koch had a big part to play in the selection of both draft picks and he’s looking forward to seeing what they can deliver in USL play.

“They’re both different,” Koch said of the two draft picks. “Thomas Sanner is more of a big, strong centre forward, who can hold it up, like more of a traditional number 9. Chris Hellman’s more of a false 9, but he’s also versatile that he can play as a 10, he can play out wide too.

“He’s got a very, very cultured left foot. You give him a chance and he’s probably going to score. His challenge at the MLS/USL level is how does he deal with the athleticism. His mobility is probably one of his biggest areas that he needs to work on, but he’s got a great football brain, great football IQ. I think being around the first team will get him up to the speed of play and then we’ll see how he does.

“Thomas on the other hand, bigger, strong player. He’s also a good athlete. He’s still learning how to play as a target and he’ll admit that, but he’s a guy who’s hungry and willing to learn.”

Koch will be hoping that they can find a bit more consistency than last year’s strikers.

Vancouver hit 39 goals in their 28 games, which saw them sitting right in the middle of the pack in terms of goalscoring. But it could have been a different story, with the USL side mirroring the first team with regards to the creation of chances but the inability to take them.

It’s an aspect that needs to change throughout the pyramid of the club and this year’s strikers, especially Hellman and Sanner, will have a chance to show Robinson and his coaching staff that they have what it takes to make the move up to the first team down the road.

But the draft picks aren’t the only new striking additions to WFC2 looking to make the grade.

“They’ve got an opportunity there, as does Daniel Haber, who we’ve brought in too,” Koch added. “Daniel being Canadian, went over to Europe, tried it, had a decent amount of success and now he’s come back this way. He wants to try and push on to the first team, just like everybody else in the group. He’s been doing well in preseason training.”

Haber has spent the past three years playing his football in Israel and Cyprus, earning five senior Canadian international caps along the way. He hasn’t come home to play lower league football but he needs to show that he deserves his chance.

The final piece, so far, to WFC2’s strikeforce is a player with three years of USL experience already under his belt with Wilmington Hammerheads and Oklahoma City Energy – Kyle Greig.

Greig has hit 22 goals and added four assists in 76 USL appearances these past three seasons, seven of them last year, including one against the ‘Caps at Thunderbird Stadium.

Having watched Greig play in the league first hand last season, Koch feels he could be a very important player for WFC2 this year.

“The nice thing with USL is that you can watch every single game,” Koch told us. “So at the end of the year we looked, and we always put reports on the players that we play against and see who did well, and he was one of the players. He did well, scored seven goals. I think he could probably score more than seven goals in the league.

“We need a little, well not just a little, we need a lot of experience in our group, but we’re not the type of environment where we’re going to bring in a 30-year-old or a 32-year-old or someone like that. It needs to be someone who is a little closer in age to the guys that we have in our group. As a 25-year-old veteran, if that even exists, he’s one of the veteran players in our group.

“He’ll give us a bit more maturity, a bit of leadership. He’s also hungry. He’s certainly not at the end of his playing career. He still wants to continue to play and go as far as he can. He’s a welcome addition. He’s got the character we want, he’s got the leadership we want, and he’s a good footballer too. We just have to integrate him with our group and get what we want out of him.”

So while it’s all looking quite exciting and promising up top, it was at the other end of the pitch that most of WFC2’s woes could be found last season.

The ‘Caps conceded 53 goals in their 28 matches last year, the second worst record in all of the USL. The defence looked all over the place at times, a lot of which you feel had to come from the lack of playing time together and the chopping and changing of the backline such a developmental team dictates.

“We were a little bit porous at the back last year,” Koch admitted to us. “Part of that is we are a young group. It’s one of the areas that does take time to learn how to play the position and defend as a back four.”

A few defensive players have moved on and the ‘Caps have seen where their problems lay and made new additions accordingly.

First round Super Draft pick, centre back Cole Seiler, should see a lot of USL time from the get go, and he’s going to be joined in the middle of the defence by the two latest additions to the WFC2 roster – Englishman Elliot Green and Dutchman Sem de Wit.

Koch sees both players adding some experience to the team, along with some physicality and mobility. Those two signings were announced on Wednesday, coming quickly after the signing of Canadian defender/midfielder Giuliano Frano, who was with Sounders 2 last season.

But those additions are being seen to compliment and bolster the existing talent, not replacing it altogether, and Koch feels last year’s experiences will allow a lot of them to move their games up to the necessary next levels this season.

“We’ve got Deklan [Wynne], we’ve got Jordan [Haynes] with some experience under their belt,” Koch added. “We think they’ll be better this year. You’ve got Chris Serban, you’ve got Jackson Farmer, we’re bringing in Kadin Chung.

“They’re all young players, but they’ve all had a taste now, so we’re expecting them to be better this year and continue their development. But we’ve got to put it all together.”

We’ll get the first chance to see how that’s going on Saturday at Thunderbird Stadium. Kick off is 5pm and it’s free admission. It’s the best pre-Valentine’s Day date you could have, so head along! 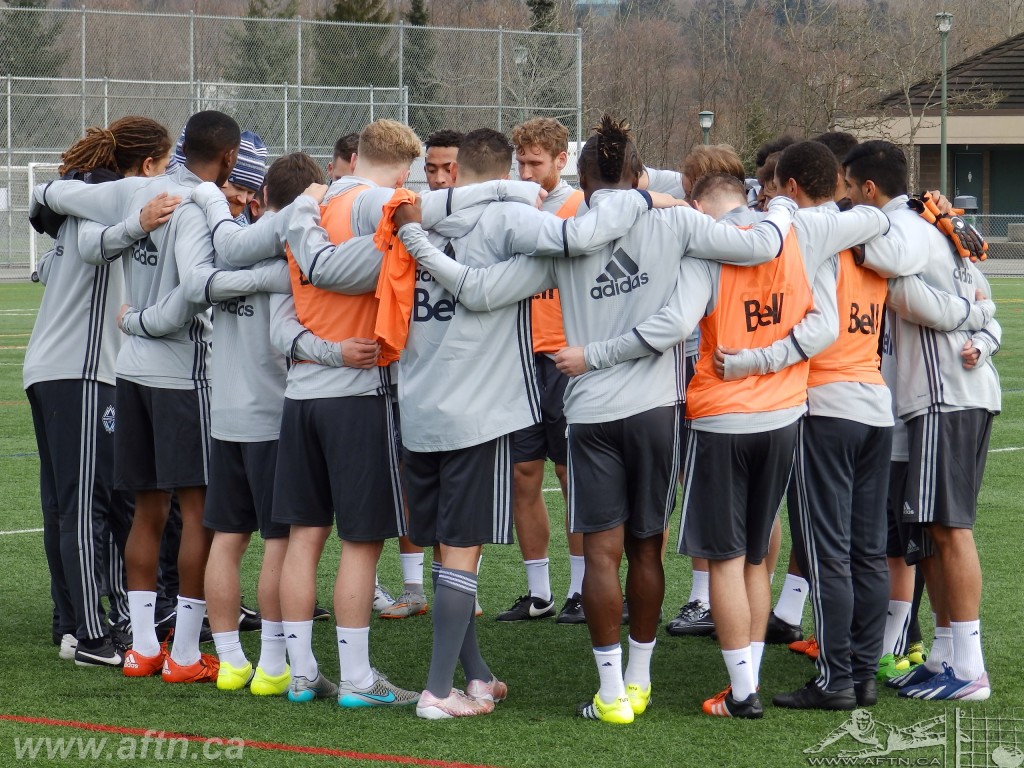