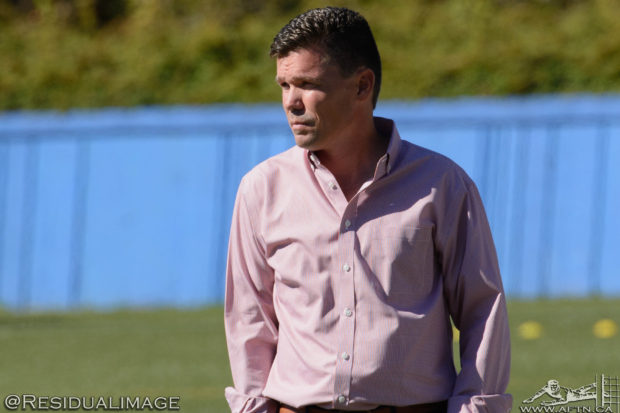 Missing a number of players to suspension, injury, and first team duty, it was always going to be a hard ask for a young and fairly inexperienced WFC2 side as they hosted third placed Colorado Spring Switchbacks at Thunderbird Stadium on Sunday afternoon.

And they didn’t have their troubles to seek once the game got underway with a straight red to Matthew Baldisimo in the 18th minute reducing the ‘Caps to ten men for the remainder of the match. An injury to starting left back Deklan Wynne ten minutes later forced further changes to the Whitecaps line-up, but they battled hard, taking the game to the Switchbacks before fatigue set in and the visitors struck twice in the second half to take all three points in a 2-0 win.

Luke Vercollone struck twice, the first just before the hour mark and the second four minutes from full time, to clinch a playoff spot for the Switchbacks and move them up to second in the West. WFC2 remain fourth, and despite extending their winless streak to four matches, head coach Alan Koch was full of praise for his young side.

“Incredibly proud of the group,” Koch told us after the match. “I was very, very happy with the performance. Obviously a red card that early in the game completely changes anything that you might have prepared week long for the game.

“Having said that, this group’s not about age. Those are just numbers. We had a lot of confidence putting those young guys out there today and I have a lot of respect for the effort that they put forth. The problem solving that they had to do by themselves in the first 45 minutes, being a man down, I thought they did an excellent job of that. They were good throughout the second 45 minutes.”

It’s hard to say how much the red card changed the game, but it certainly didn’t help Vancouver’s cause. Missing the likes of Kyle Greig, who was suspended, and the attacking play of Marco Bustos, Alphonso Davies, and Brett Levis, it was always likely to be an uphill battle against a talented and experienced Colorado Springs team.

“It’s tough to create when you’re a man down,” Koch added. “Give Colorado Springs credit. They’re a good team. They’re an organized team. They played a great road game and obviously the red card, I haven’t seen a replay of it yet, I don’t even know if it’s a red card. If it is, maybe that makes us feel a little better. If it’s not, we’re not going to feel very good tonight.”

It was the third straight WFC2 home game that’s seen a man sent off, this being the first Whitecap, a fact which irked Koch a little.

“The hard part is that’s the third game here in BC where we’ve had a player sent off, not just us, but the opposition too,” Koch said. “I don’t know if any of them warranted red cards. Who knows? We’ve obviously got to go and look at them.

Despite the man disadvantage, the Whitecaps made a lot of the running, trying to take the game to their visitors, but the Switchbacks always looked the more likely to score, outshooting their hosts 10 to 4.

Whenever you go down a man, the natural instinct is to bunker a little, but it was pleasing to see the ‘Caps pushing and believing they could get all three points.

“We obviously sat back to a certain degree,” Koch said. ” We tried to close down the space and stayed nice and compact. Then transition becomes vital, and I thought we did a good job of trying to get forward and trying to get numbers forward, and trying to create. Unfortunately we didn’t create the real opportunity that we needed.

“I think if we had, we’d probably have taken it because we felt very good about themselves. They were confident. I have a lot respect for the guys that played today. Full credit to our players. They dealt with situations but unfortunately, that’s football. Sometimes you prepare all week long for a game and it changes in the first minute. Today it changed in the 18th minute.”

The missing players also made for a weaker bench for Koch to turn to, with Terran Campbell being the only real attacking option. That made for late substitutions for what looked like a tired team out there towards the end.

“Mostly [it was due to] the players on the pitch and giving them the opportunity to go out there and see if they could go and get the job done,” Koch admitted. “When you’re fatigued, and they were fatigued, when you’re tried that’s where character comes in. Also it challenges you as a player – can I pick it up? Can I control the tempo of the game and make a difference?”

Losing New Zealand international Deklan Wynne, who has looked impressive over the last couple of games, was also a blow. He went off in the 28th minute with a “slight hamstring strain”, and it was felt it was better to get him out of the match instead of risking making the damage worse and long lasting.

“We don’t want to lose anyone at this stage,” acknowledged Koch. “We’ve got two big games ahead of us.”

Wynne shouldn’t miss too much, if any, time, and there’s also good news for Will Seymore, who went off injured a few games ago with an injury that looked bad at the time but has turned out to be far better than first feared.

“[He’s] hopefully pushing to get himself in the line-up for next weekend,” Koch revealed. “He’s a huge part of our team. He’s a character player and he makes the players around him a lot better, so the sooner we can get him back, the better it will be for the entire group.”

The ‘Caps now have two games of the regular season remaining, and they at least got some good news on Sunday when Seattle Sounders 2 grabbed a stoppage time equaliser at home to OKC Energy to keep the Oklahomans below Vancouver in the table, albeit with a game in hand.

WFC2 remain fourth in the Western Conference standings, with the top four guaranteed a home tie in the first round of the playoffs. Their final game of the season will be against OKC Energy on September 21st. That should be a cracker, but before they can even look ahead to that, they have the small matter of a visit from Cascadian rivals Portland Timbers 2 next Sunday.

The Whitecaps have owned the Timbers this season, winning all three of their matches, but Portland head to Vancouver on the back of a pair of huge victories against two of the top teams in the West – a 4-0 home thrashing of OKC Energy, and last night’s impressive 1-0 win at Rio Grande Valley.

“We know the next one against Portland is going to be a tough, tough game,” Koch told us. “We’ve had a lot of success against them so far this season, but if you look at their results the past two weeks , they’ve obviously got themselves going now right at the end.

“To go and do what they did last night, to go down to Southern Texas and get three points is a fantastic result. Not many team, if any, have done that. They hammered Oklahoma City last week at home, so we know that’s going to be a tough game. It’s obviously a derby. The first three games don’t mean anything.”

And Koch is only too aware of the playoff implications for the ‘Caps as they push for that top four spot.

“We’re going to go play a game at home now which is a must-win for us and they may still be fighting for playoff aspirations too at that time,” Koch added. “We’ll focus on what we need to do. We’re not worried about the second one. We’ve got to go and play against Portland next week.

“It’ll be a big, big one for our group and we’ll find out in the next few days who we have and prepare the guys and hopefully put this [game] behind us as quickly as possible, because there’s a lot out there to build on. I was very, very pleased with the individuals, and very pleased with the group as to how they came together.”