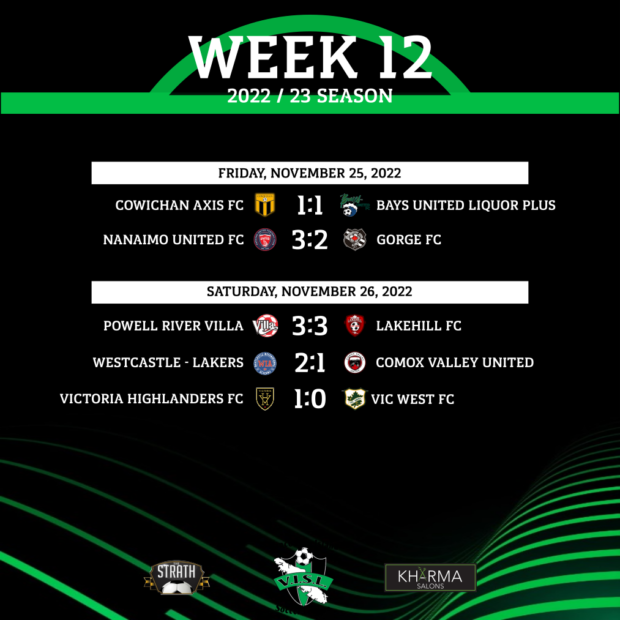 All of last weekend’s results in the Vancouver Island Soccer League (VISL)Division 1 were decided by the difference of one goal or less, and while league leaders Lakehill dropped a couple of points, their closest challengers, Vic West, couldn’t take advantage and actually fell a further point behind by the end of the weekend’s action.

There was a draw to start off Friday as Cowichan Axis and Bays Utd battled to a 1-1 final. Cowichan had a goal from Michael Daniels, while Bays goal was by Ethan Emile.

Friday also had a bit of a surprise result as a previously struggling Nanaimo squad took down the surging Gorge team 3-2. Nanaimo had goals from Paddy Greig, Juan Rubiano, and Callum Magog in the very late stages of the game, with Gorge’s goals coming from Hussen Sayed and Evan Louden.

Saturday morning got started with a cracker of a match as Powell River Villa tied Lakehill 3-3. Hometown fans saw Villa goals from Niko Cristante and two from Patrick Osakabe-Green. Lakehill goals came from Chris Peereboom and a Blair Sturrock brace in the last 10 minutes of the game.

Saturday also had a matchup at Starlight Stadium that saw the Westcastle Lakers slip by Comox 2-1. Westcastle goals came from Kevin Perez and Devin Austin, while Comox broke up the shutout bid in the last minutes of the game with a goal by Wyatt Lyon.

The last game of the weekend saw Victoria Highlanders surprise Vic West 1-0 thanks to an Isaiah Whittle goal. Securing the shutout was Highlanders keeper Nolan Sowell.

So after all of that action, the VISL Division 1 table looks as follows after Week 12: 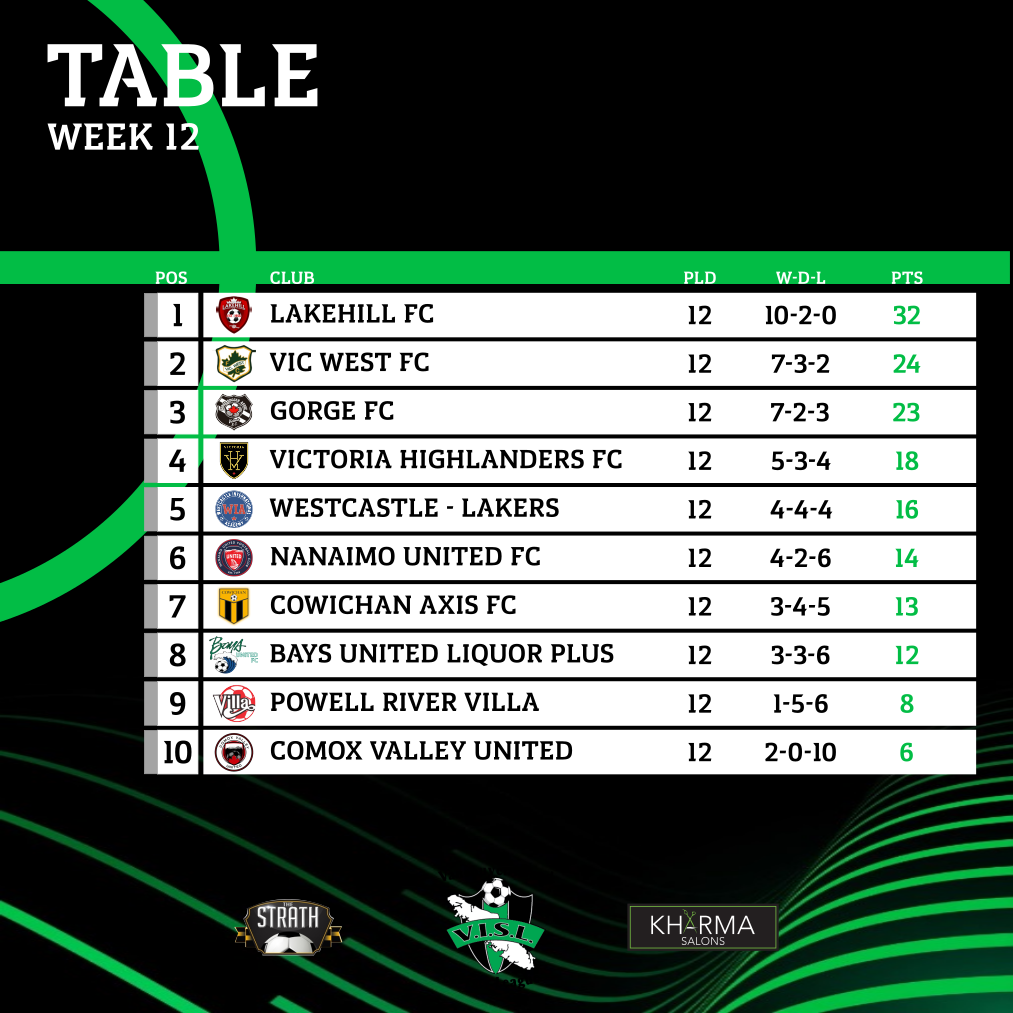 The story of first place took a mini twist, but did not change too much. Lakehill was able to get an extra point ahead of both Vic West and Gorge who took losses over the weekend. Westcastle and the Highlanders both jumped up and are battling for the 4th and 5th spots, while Cowichan and Bays are nipping at their heels.

Powell River and Comox remain in the relegation zone with the latter being in the basement still.

The Golden Boot leaderboard had a slight change, but is still Lakehill dominated. A brace from Blair Sturrock puts him neck and neck with teammate Patrick Nelson, slightly in his shadow for the time being.

Here is how that leaderboard is looking: 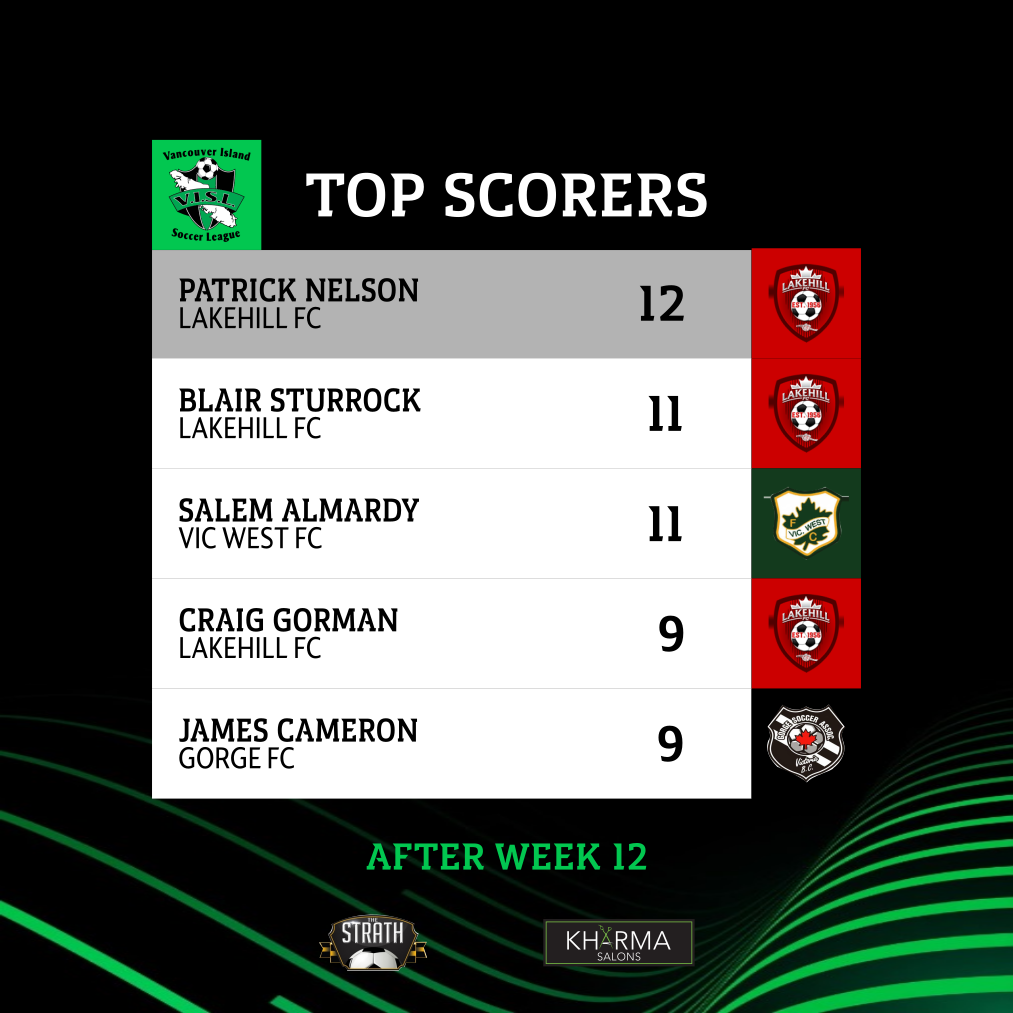 So hopefully the snow and ice stays away this coming weekend and the following slate of matches all get played: 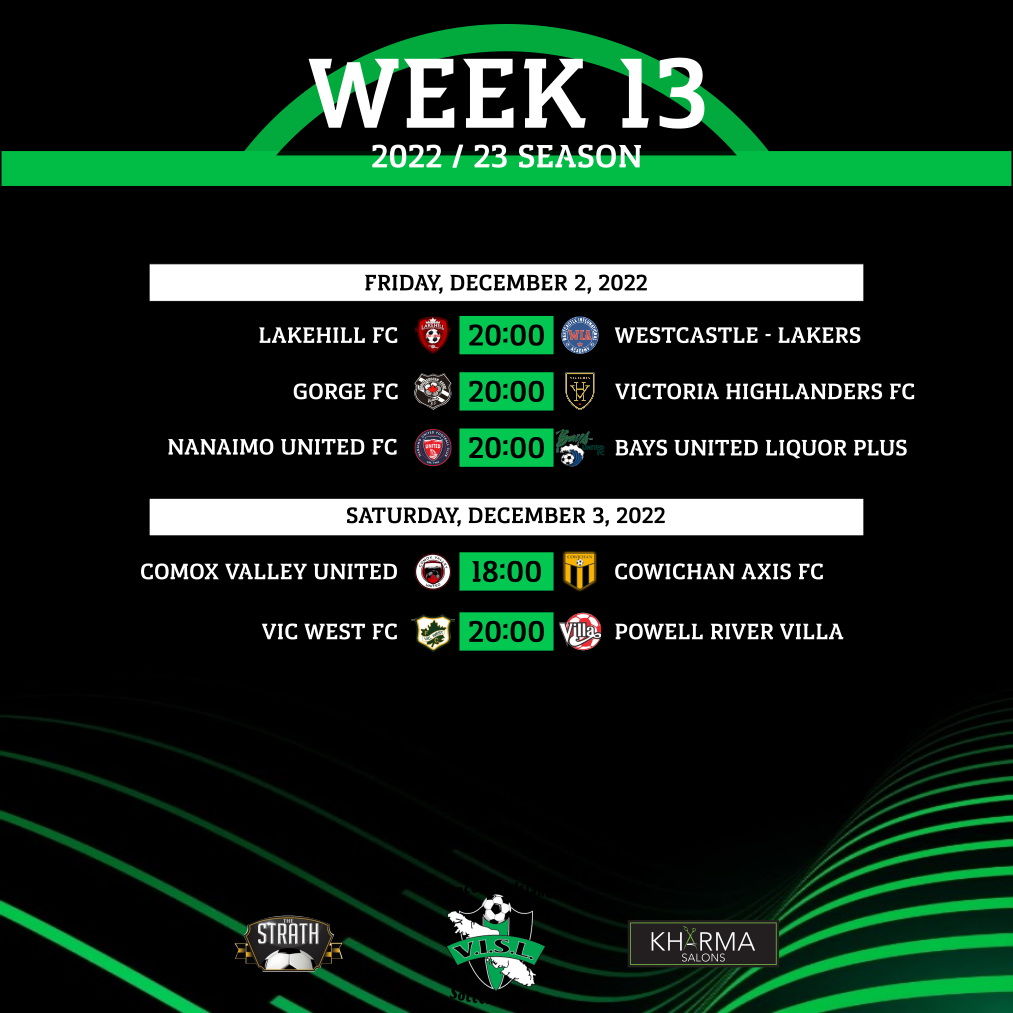