It was certainly a mixed week for Canadian teams in Major League Soccer. A win, a draw and a defeat was how the results ran, but individually there were some standout performances from Canadian players in the league.

Ten Canadians saw minutes in Week 2 of the MLS season, an increase of two on last week’s opening round of matches, leaving 17 players still to see the pitch for the first time this year.

Four players started for their teams. Both Orlando’s Cyle Larin and New York Red Bulls’ Karl Ouimette played the full 90 minutes for their respective sides, with Toronto’s Will Johnson and Jonathan Osorio just behind.

Ouimette saw his first minutes of the season in the Red Bulls defence, as they fell to a 3-0 thrashing by the Impact, with Kyle Bekker getting his first run-out of the season, as a late Montreal sub.

Two Canadians found the back of the net, with Larin grabbing his second of the season in Friday night’s 2-2 draw against Chicago, and Montreal’s Anthony Jackson-Hamel getting his first ever MLS goal, and the Impact’s third, in the one minute he was on the pitch.

Not a bad strike rate from both those guys and you can watch both of their goals below:

Will Johnson grabbed an assist this week in Sebastian Giovinco’s tying goal away to New York City on Sunday, but that was it in terms of Canadian contributions.

So after Week 2 of the 2016 MLS season, here’s how your 27 Canadian players are faring: 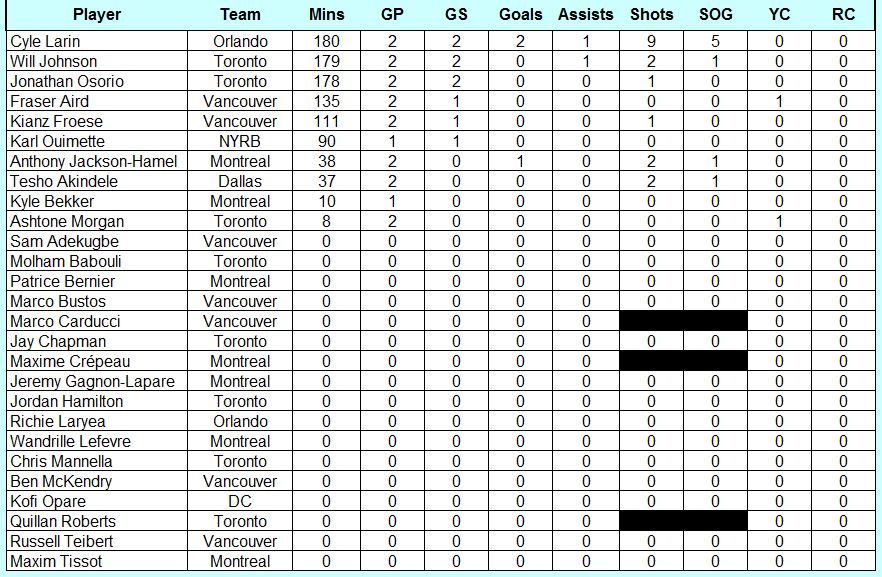 We’re still working out the best way to present this info to you over the coming weeks, this seems not bad, but if you’d like things laid out in a different way or if we’re missing some stats you’d like to see, let us know in the comments and we’ll see what we can come up with.