This past weekend proved to be another busy one for Canadian players in Major League Soccer, with 11 players seeing action and playing a total of 696 minutes, the most gametime so far this season.

Eight of those players started for their teams, three with the Whitecaps, with five of them playing the full 90 minutes.

Vancouver’s Marco Bustos and Russell Teibert got their first starts and minutes of the season, while Tesho Akindele got his first start of the year with Dallas, after a string of sub appearances.

Two Canadians found the scoresheet in MLS this week.

Tesho Akindele made the most of that first start, stroking home a 36th minute penalty to tie things up at 1-1 in Dallas’ eventual 2-2 draw with San Jose. His second goal of the year, one behind Canadian leader Cyle Larin.

While in Montreal, Kyle Bekker headed home an 86th minute game clincher in the Impact’s 2-0 win over Columbus. That should see him in Benito Floro’s Canada team for the next year.

You can watch both goals below.

In the updated season so far standings, Vancouver’s Fraser Aird continues to lead the way in appearances and overall minutes played, making his fifth start and sixth appearance of the year in the ‘Caps 4-0 horrorshow in DC.

Here’s the full ‘Canadians In MLS’ totals after week six. 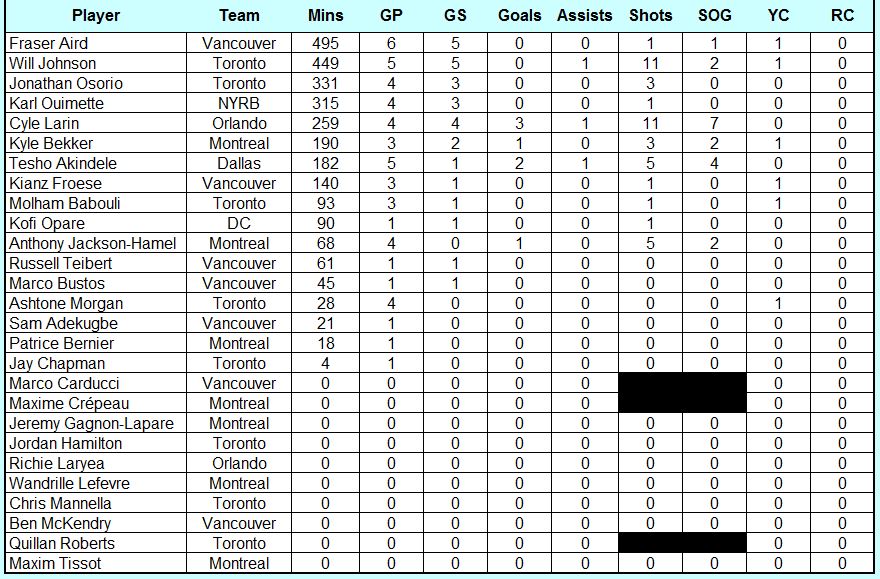