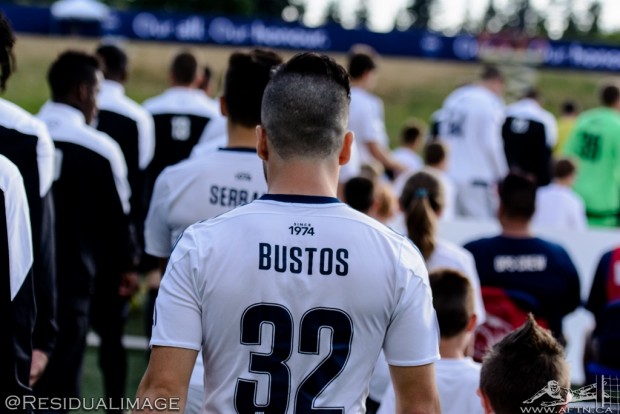 Marco Bustos is a veritable old man in Vancouver Whitecaps’ locker room during preseason these days.

“Finally!”, laughs the 19-year-old Residency graduate when it’s pointed out to him that he’s no longer the youngest player involved in the ‘Caps first team squad any more.

As he gets set to start his second season with the MLS team, Bustos shared the pitch in the ‘Caps 2-0 win over Portland on Wednesday with a very young Whitecaps team, even by Carl Robinson’s standards. He was one of five teenagers to play on the night. Four others sat out.

The future isn’t just bright for the Whitecaps youth movement, it’s already here, and Bustos isn’t fazed by it in the slightest.

“Growing up, I’ve always been with a young dressing room, a young crowd,” Bustos told AFTN after the ‘Caps 2-0 win over Portland on Wednesday. “To me, it’s not new, but I think to some of the older guys, having so many young guys in the room is new to them because now they’ve got to step up their leadership.

Bustos played 80 minutes of the win over the Timbers before being replaced by 17-year-old Tommy Gardner. The WFC2 player became the fifth teenager on the field for Vancouver during the match, with Alphonso Davies the youngest, aged just 15.

All of them acquitted themselves very well, playing against older, more experienced and more physical Portland players.

“They did well,” Bustos enthused. “They did superb. The more games they’ll get with us and the first team, the more they’ll grow. They just need to come in and be relaxed and they’ll do fine.”

The opportunities to impress being afforded to them is all any young player can ask for. They know they’re going to get it under Robinson, and as we’ve written so many times before, it’s then up to them to grab it with both hands.

Bustos is just glad to be playing fit and healthy again, after an early season injury last year saw him miss several weeks of action and primarily limited to USL minutes when he did return.

But he’s back hungrier than ever and already has a goal and an assist to his name this preseason. Playing the near full game against Portland he looks set to challenge for a lot more MLS minutes this term and is excited about the season ahead.

“It felt good to get a good span of minutes there,” Bustos told reporters after the win over the Timbers. “Especially working hard through the preseason and now getting our chances. All the young guys I think did really well and we’re moving forward as a group and as a team. For March 6th, we’ll be ready.”

Bustos co-led WFC2 last year with 7 goals, impressing in the process and earning him his first MLS minutes in the penultimate game of the regular season, coming on for the final 29 minutes in the 2-0 loss in Dallas.

That first taste of first team action and the setbacks he’d underwent in his rookie season spurred Bustos on to come back hungrier and fitter as he looks to earn himself a regular spot in Robinson’s gameday squad.

He headed back to Vancouver early to put in some extra shifts and even being away with the Canadian national team camp at the end of January hasn’t seem him skip a beat. In fact it energised the young Canuck.

“In my offseason, I did lots of work,” Bustos told us. “To me, it wasn’t really an offseason and I had to come back in sharp and fit. Coming back and going straight to the Canada camp got me settled in a little bit more with the ball. It helped me be a little bit more sharper.

“I came back a week early to work with our strength coach, so that was good. There were about six or seven of us, so it was good to get a bit of a head start.”

The hard work is clearly paying off and the young midfielder feels he’s been learning so much from having such a talented and experienced veteran in Christian Bolaños join the Whitecaps this season. It’s helping his play and his confidence come on leaps and bounds.

“It’s crazy how much you can learn from someone like that,” Bustos said of Bolaños’ influence on him so far. “When he gets the ball he’s super calm and relaxed and he lets the game come to him. That’s a good mark for me to watch him and not rush the game. Just keep it simple, just keep it quick and go with the flow of the game.” 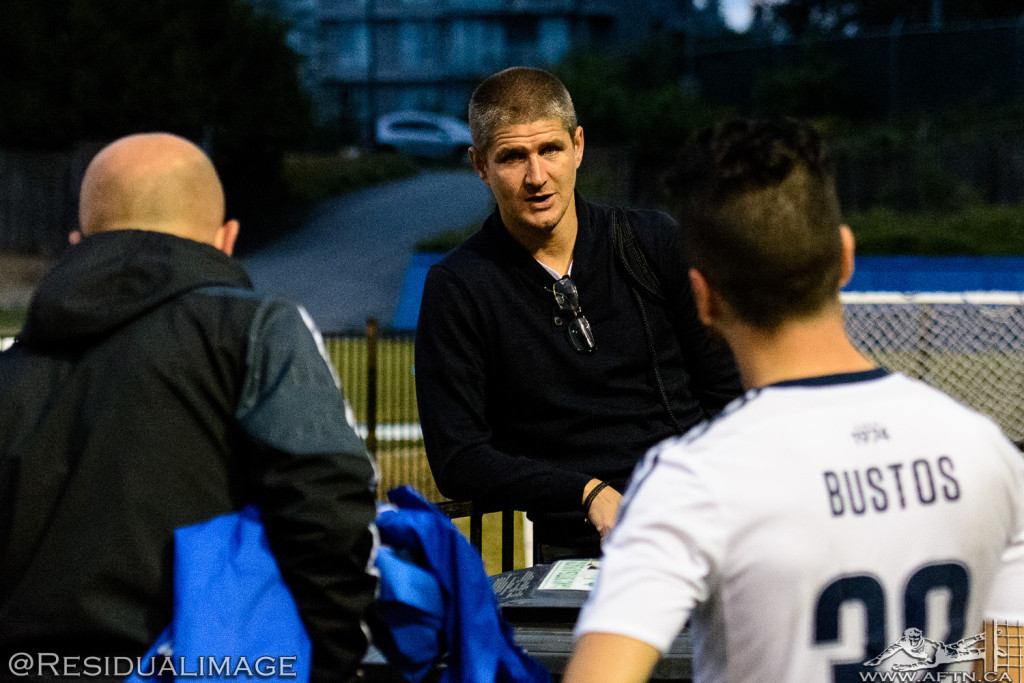 There’s no doubting that Bustos will get some significant minutes with the Whitecaps this season in all first team competitions. He’s in the mix for a whack of MLS minutes, as is fellow Residency alumni Kianz Froese, and the pair are impressing the Whitecaps management with their performances and the efforts they’ve been putting in this preseason.

“They’ve been excellent,” Whitecaps assistant coach Gordon Forrest said of the pair. “They’ve been waiting their time to try and break through but in terms of this preseason, they’ve both worked extremely hard in the offseason. They’ve both got themselves up to a great level of fitness, which in turn helps their performance, but both of those kids just now, Kianz and Bustos, are enjoying their football. It certainly gives us things to think about for starting the first game.”

How many minutes Bustos will see in MLS this season and how he will fare, will be one of the more exciting stories to track. He’s setting his sights high, but also realistic.

“My goal, personally, is obviously to win games and help the team win,” Bustos told us. “Whatever role I’m given, I just want to do my job and pursue that role and do my job and if I can score a goal, or two, this season, that would be my goal. To score in MLS.”

You have to feel that day and that goal will be here pretty soon.