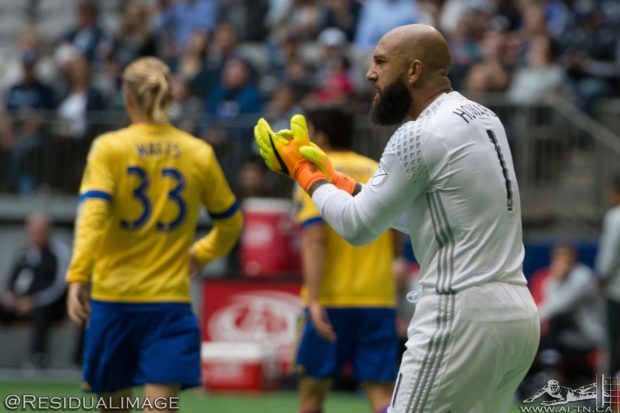 If you don’t win games, you don’t climb the standings. If you draw four matches in a row, you slip and fall right out of a playoff spot.

After four peculiar, head-scratching draws, all of which could have been conceivably won by Carl Robinson’s men, Vancouver is out of the top six teams in the Western Conference. With 14 Whitecaps matches played, this is how the table stacks up: 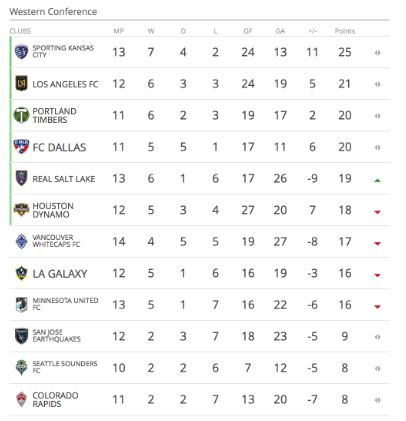 Yeesh. With everyone having played fewer games, everyone has the opportunity to catch up, meaning that Vancouver could soon find themselves left in the dust. Even last-place Colorado could find themselves tied with Vancouver should they win all of their games in hand. Robbo needs to right the ship, fast.

Getting back on track starts with a win against that same last-place Rapids team. If the Whitecaps can’t beat the worst team in the league, I don’t know that I’ll have much hope left to give. As a Liverpool fan, I’m already running low on hope after last week’s Champions League Final, and a defeat to bottom-feeding Colorado would be a devastating blow.

Kendall Waston has left town, soon to be on his way to Russia for World Cup action, leaving a massive hole in Vancouver’s back four. Atlantis B wrote a great piece over at Eighty Six Forever about the problems with the Whitecaps defence, widely considered the worst in the league.

Efrain Juarez has been invisible, while Aly Ghazal has been steady when deployed in midfield but committed two costly errors when slotting in at centre-half last week. After a disastrous performance which saw him blamed for two of the three Revolution goals, Ghazal will be unlikely to get a second shot at playing in the back four despite playing there regularly for Egypt in the past. The stalwart Waston is away, so the Whitecaps have the following centre back options: Jose Aja, Aaron Maund, and Doneil Henry.

Jose Aja has been a regular starter this season, and while he hasn’t overly impressed, he hasn’t been bad either. Aaron Maund has had similar performances to Aja but with limited playing time, getting in just four matches all season compared to Aja’s 11. And Doneil Henry is only just back from the United Soccer League, having been loaned to Ottawa Fury FC to regain match fitness. While this means we haven’t got a look at Henry in a Whitecap uniform just yet, he played the full 90 minutes and helped keep a clean sheet in all three of his matches.

With just three available centre halfs, Henry will almost certainly get a look in over the coming weeks. Whether that comes tonight we won’t know until just before kickoff, but something clearly isn’t working and trying a few new things might be just what the doctor ordered for what is currently a floundering mid-table club. Maund and Aja are the most likely pairing to start in front of Brian Rowe, to be flanked by some combination of the Brett Levis/Jake Nerwinski/Sean Franklin fullback contingent, with Marcel De Jong looking to be out injured. Robbo seems to have settled on Levis and Nerwinski together, so I wouldn’t be surprised to see that this week after Franklin’s poor showing against New England.

The rest of the line-up is a little easier to predict, but only just. With just one outfield injury – to midfielder Jordon Mutch – Robbo is spoilt for choice. Away from home, I’d expect to see Ghazal returned to his midfield role alongside Felipe, with either Juarez or Russell Teibert just behind them, for a solid triumvirate of defensively responsible midfielders to help keep things under control with our big Costa Rican on international duty.

As for the forwards, it will most likely be Kei Kamara getting service from Yordy Reyna and Alphonso Davies on the wings, although Robbo could opt to start the more experienced Brek Shea in favour of the young Canadian in an away match – Shea has been excellent on the road this season.

The Rapids have lost six matches in a row, including a memorable 4-0 drubbing at the hands of NYCFC two weeks ago, and no amount of shakeups seem to be doing the trick for Anthony Hudson’s side.

With the US having failed to qualify for Russia, Tim Howard will be remaining with Colorado over the next month, and no other national team representatives for countries at the World Cup are present on the Rapids roster. Two players are out injured – defenders Kortne Ford and Marlon Hairston.

The Rapids tend to play a 3-5-2, the preferred formation of Rapids boss Anthony Hudson in his New Zealand national team coaching days. No stranger to the three at the back will be two of Hudson’s defenders, Kiwis Deklan Wynne and Tommy Smith. Wynne and Smith both played under Hudson when he was the manager of the All Whites, making the Rapids’ recent switch to 3-5-2 a little more familiar. Smith had a bust-up with Hudson while playing for New Zealand, leading to Hudson’s statement that he would no longer select Smith for the national team. Their differences seem to have subsided, and Hudson will have no issues selecting Smith for the Rapids.

The rest of the Colorado line-up leaves something to be desired. Dominique Badji is scoring at a much better pace than the rest of his career, with a goal every other game. His strike partner Joe Mason has been a slight disappointment since being signed on loan from EFL Championship winners Wolves. Also joining from Wolves is Jack Price, the lone standout name in an uninspiring midfield for Colorado.

The Whitecaps absolutely must win this game. It would be inexcusable and nigh-impossible to come back from if they don’t. The Colorado Rapids are the worst club in the league right now and on their day, Vancouver should smash them. I’m not saying they will, because we haven’t seen the “on their day” Whitecaps for what seems like forever. But I can’t take another draw.

The ‘Caps will win this one, they have to. Hopefully it can be the catalyst to turn their season around.