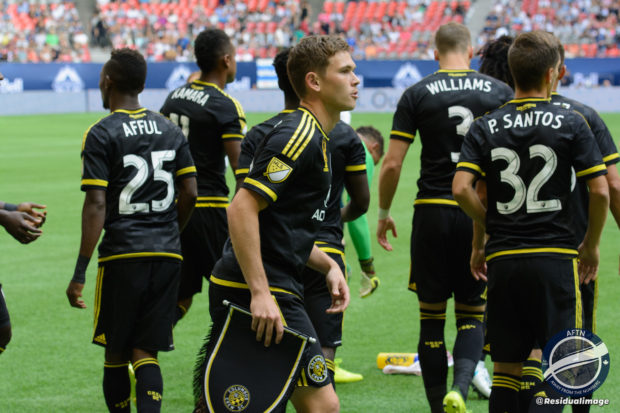 It’s been a long two weeks without Whitecaps soccer, and off the heels of Vancouver’s last outing, a 4-1 defeat at the hands of the seemingly unstoppable Atlanta United, with a controversial red shown to Kendall Waston, the ‘Caps will look to bounce back in a big way against the 3-0-1 Columbus Crew, who sit atop the Eastern Conference with 10 points alongside NYCFC.

It’s really strange that the Whitecaps didn’t play at all last weekend, as I could’ve sworn we had a match scheduled, but it’s nice that Kendall Waston didn’t miss any more crucial game time as he fulfilled his international duties for Costa Rica.

Like the Crew, the Whitecaps are also tied for first in their conference with Sporting Kansas City, having played to a 2-1-1 record, although I can’t for the life of me recall which match that we drew. There were the two wins against Montreal and Houston, the loss to Atlanta… hold on, let me check the fixtures.

The Whitecaps did in fact play a game last weekend, a miserable 0-0 home draw with LA Galaxy Reserves that they really should have won. I was excited to see Robbo go for a 4-3-3 formation against a depleted Galaxy side that was bound to be playing for the draw, but the execution just wasn’t there – passes were sloppy, runs weren’t made where they should have been, and the few chances that were created were finished poorly.

I can only hope that the manager decides to stick with the 4-3-3 and play to the formation’s strength’s. It’s a dangerous strategy from a defensive perspective, especially without a holding midfielder in the line-up, and I doubt we’ll see it against the undefeated Crew, but the Whitecaps could benefit from a more offensive play style. I’d be interested to see Russell Teibert used in the midfield of a 4-3-3 – he impressed defensively and passed the ball very well in the Whitecaps’ 2-1 defeat of Montreal, and could benefit from a more free-flowing formation like the 4-3-3.

MLSsoccer.com’s Dylan Butler projects the Caps return to a more defensively comfortable 4-1-4-1, with Russell Teibert drawing back into the line-up and Cristian Techera returning to the bench. Efrain Juarez hasn’t really impressed so far, but he will most likely remain in the midfield alongside Felipe, although I’d like to get a better look at Jordon Mutch.

Yordy Reyna hasn’t made the trip, so the question is who will the wide men be? You’d figure Alphonso Davies will fill one of those spots, with Brek Shea the most likely to fill the other. But could this be a game to play a wild card and bring Bernie Ibini back in from the cold?

In the defence, the returning Kendall Waston will push either Aaron Maund or José Aja out of the line-up thanks to the successful appeal of his red card by the Whitecaps. Which one of those two gets the nod to be his partner going forward is certainly one of the more interesting choices facing Robinson. Waston has that existing partnership and understanding with Maund, but Aja has done well over the last two games and provides the team with some better distribution options. 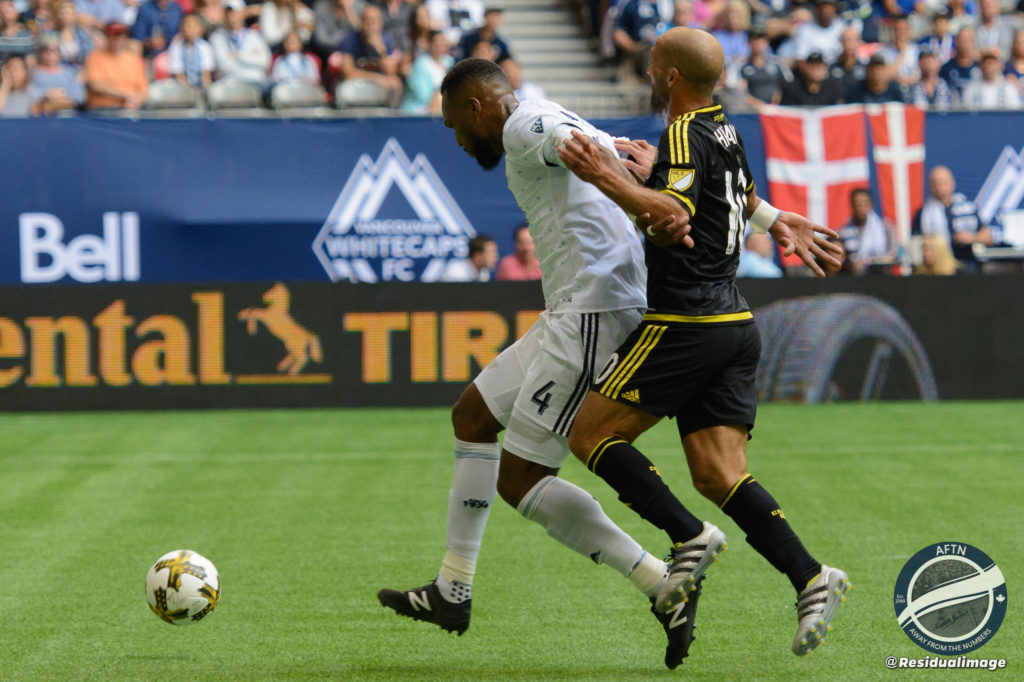 Kei Kamara will get the start as the lone striker against his former club. If the game remains tied in the final half-hour, I’d like to see Robbo push the wide midfielders up the pitch and try out that 4-3-3 again, hopefully without sending Davies to left-back to make room for Brek Shea or someone else.

The ‘Caps will almost certainly stick with their traditional deep-lying, counter-attacking tactics against the undefeated Crew, but as we saw in Columbus’ match against the Impact, the Crew love to play out from the back, and the ‘Caps could benefit from a high press, potentially in the later stages of the game.

But on the road, Carl Robinson is unlikely to waver from what WhitecapsFC.com’s Farhan Devji has coined the “smash and grab”. Houston Dynamo enjoyed 67% of possession in their 2-1 loss to Vancouver in the Whitecaps’ first road game of the season, but fell victim to a lightning-fast counterattack from Brek Shea that saw the American score the match winning goal. Vancouver were happy to sit back and wait for Houston to make a mistake, and will most likely attempt the same strategy in Ohio.

Like many other fans, I was disappointed in the performances of much of Carl Robinson’s side last weekend. Yordy Reyna needs to improve – he hasn’t looked at all like the man that tore defences apart in the back half of the 2017 season. Aaron Maund has been fine, but will need to be more impressive if he wants to keep his place alongside Kendall Waston, as Canadian international Doneil Henry inches closer to a return from injury. Felipe has been hesitant offensively, but looked really dangerous in his substitute appearance against Montreal – perhaps he’d benefit more from coming off the bench and playing higher up the pitch. I’m still waiting to see what Efrain Juarez brings to the table – I’m sure he’s got more than what he’s shown, and while quiet can be good for a midfielder, it certainly isn’t the type of play I’d like to see from him off the heels of an 0-0 draw with LA Galaxy’s second team.

I guess I’m spoiled as a Liverpool supporter, but I want to see exciting, attacking and energetic play from a lot of the quieter, restrained players, and although I know that isn’t Robinson’s style, many of the players in this Vancouver side are more than capable of playing a high-intensity game.

Columbus have won both of their home games so far this season and look very dangerous as of late – they impressed in a 3-1 win over DC United last week, and will benefit from the return of two key starters who were with the USMNT over the international break, goalkeeper Zack Steffen and midfielder Wil Trapp. It won’t be an easy match for the Whitecaps, although they have won in each of their last three trips to MAPFRE Stadium.

Whatever strategy Robinson decides to go with on Saturday, the Whitecaps will be determined to come away with 3 points after two disappointing outcomes against Atlanta and LA Galaxy. It may be early in the season, but the Whitecaps have been without the spark that they found in the late stages of their previous campaign. Robbo suggested it would take 10 or 12 matches for the Whitecaps to find their rhythm, but this is a great opportunity to pick up some momentum against top-tier opposition as the first month of the 2018 season comes to a close.