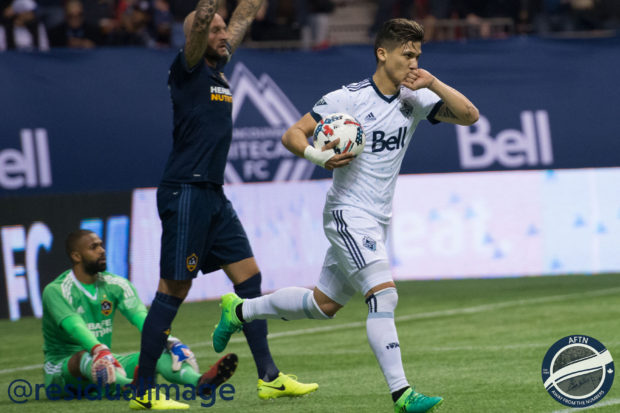 Don’t shoot the messenger, but Whitecaps have done it again: almost halfway through the season, and we sit mid-table, form inconsistent and toothless in front of goal, all while finding new and more creative ways to alienate the fanbase via mind boggling match promos and frustratingly snubbing general admission in the Southside.

I really do hate to say this, but I haven’t felt bad about not renewing my season ticket once this season, although Yordy Reyna’s thundering header late on against Manchester City Reserves B New York City FC did make me miss the tingle that would run down my spine as the ball hit the net to an explosive roar.

In many ways, this Wednesday’s matchup against LA Galaxy represents most of the roadblocks that the ‘Caps have run into in their MLS history; LA have twice knocked Vancouver out of the playoffs, with Vancouver rarely being able to overcome the star studded LA team, apart from a couple of notable exceptions.

All that being said, this LA Galaxy side are not like those that have come before them; Curt Onalfo’s team has turned to the team’s youth system rather than the free transfer market of Europe’s top 5 leagues. Putting it nicely: his club are in transition. Putting it harshly: the Galaxy are playing terribly. 22 points from 18 games, 8th in the Western Conference, and two points behind Vancouver, who occupy the lowest playoff spot. Vancouver also have a game in hand on the Galaxy, but does that really mean anything? One would hope so.

LA Galaxy’s last outing was against Manchester United on the EPL club’s first game of their preseason tour. The entertaining game ended 5-2, with both sides using 11 subs in a classic friendly game. It is worth noting that when LA brought on Gio Dos Santos, their “A team” managed to score two quick goals.

They were repeatedly carved open by Manchester United, with Nathan Smith in particular crumpling under the pressure. But hold your horses, Matias Laba is not quite Paul Pogba, and Fredy Montero isn’t exactly Romelu Lukaku.

Analysing the ‘Caps form is frustrating: do we look at the complete lack of fight and implementation of a gameplan in the 4-0 loss to Chicago Fire? Or do we zero in on the more recent show of character and creativity that we saw in the 3-2 humdinger against David Villa FC New York?

See what I’m getting at here? It’s impossible to tell which Vancouver Whitecaps will show up on the night. Carl Robinson probably has the same thought.

David Ousted doesn’t really have a realistic competitor, so I see him starting in goal behind the same back four of Jordan Harvey, Tim Parker, Andrew Jacobson, and Jake Nerwinski. Nerwinski must have earned his spot after the defensive option to fill in for Kendall Waston, who got called up to the Costa Rica squad for the knockout stages of the Gold Cup.

Matias Laba and Tony Tchani are probable to start as the centre midfield duo, with Christian Bolanos, Cristian Techera and Brek Shea making up the attacking three in a 4-2-3-1. These guys are solid, but we are getting to the point of the season that we need players to stand up and be counted, and chip in with goals. Bolanos in particular should be bagging a few more in my opinion.

A tactical aspect I would highlight is Laba’s role in containing the explosive Giovanni Dos Santos. If Mati can use his incredible positional sense to cut off the supply of the ball to Dos Santos’ feet we could nullify the Galaxy’s biggest threat.

Up front, all by himself, will be Fredy Montero. Fredy has looked increasingly frustrated in the past few months. Hopefully that early goal last week will have eased some of the pressure that he has no doubt been feeling. His quality has never been in doubt, but I can’t help but feel that we are not playing a system that suits his style. However, his work rate and skill have never been in question, and will only bring positives to the team.

Will Fredy get the service?

Will we see the Vancouver that got pummelled in Chicago or the one that fought valiantly against New York City FC?