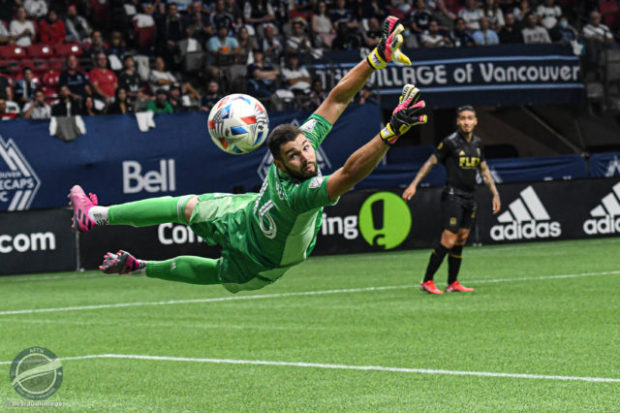 Well, three matches down and the Whitecaps are already four points adrift of a playoff spot. Does it make sense to be looking at the standings that way this early? No, but it illustrates how the ‘Caps have started quite slow this season. The only other Western Conference team without a win is San Jose, and the ‘Caps now head to the City of Angels to take on an LAFC side that have conceded just once this season and sit top of the standings.

But the doom and gloom doesn’t stop there, as on top of the continued absences of Érik Godoy and Caio Alexandre, the ‘Caps will be without Brian White for the second straight match, and it’s highly likely that Ryan Gauld will miss out as well with an adductor strain. The fact that Gauld is dealing with an issue isn’t too surprising giving how unimpressive he looked against Houston, but is obviously still worrying.

If the Scotsman is out on Sunday, then the attack – which has already struggled to generate quality chances – will be a bit of a patchwork job. Déiber Caicedo would be the most likely name to slide back into the starting lineup, and Pedro Vite will probably be given another shot to truly show what he has to offer.

Vite’s very early substitution last weekend due to concussion protocol was quite unfortunate, with the good news being that he at least isn’t listed on the injury report for this match and Sartini confirmed this week that he is good to go. The young Ecuadorian attacker has shown flashes in his brief appearances so far, although he has also had moments of struggling to connect with his teammates. If Gauld is out, he will be one of the key links in the attacking third, someone counted on to carry the play in possession.

Of course, the ‘Caps might not have a ton of possession anyway. They’ve had between 29% and 43% in their three matches this season, and LAFC in their home opener had a shade under 70% of the ball (although that was helped by Portland receiving a red card). While being a counterattacking team can work well for certain sides, the ‘Caps have lacked true bite when they are able to get out and push the ball forward.

To that point, the ‘Caps have generated 34 shot attempts through three matches. Not amazing for sure, but it’s only a bit below average. However, only three of those shots have been on target! That’s an absolutely horrendous number. A shots on target percentage of under 10% while there’s no other team in MLS that’s under 20%. That has led to the ‘Caps producing a paltry 0.71 expected goals per game per Football Reference, last in the league.

Are the ‘Caps due for an amount of positive regression in that area? You’d hope so, as over the last four years no team in MLS has had an expected goals per game mark below 0.95 or a shots on target percentage below 20% for a full season. And this team, on paper, shouldn’t be a contender for the league’s worst offense in a half decade. But it’s not been a great start! And with key attacking pieces out, it may be a few games yet before we see a turnaround in fortunes here.

So what can the ‘Caps do to try and change this against LAFC? The good news is that Lucas Cavallini was at least able to get on the scoresheet against the Dynamo, so hopefully that sparks him into finding his form once again. He can be a streaky player.

There needs to be a better connection between the front three and the middle four (the two wingbacks + midfield pivot) so I wouldn’t be surprised if there’s some sort of shakeup there, whether that’s bringing someone like Sebastian Berhalter into the lineup or pushing Cristian Dájome further forward and starting Javain Brown from the beginning.

At the back, I don’t see too much being changed unless Jake Nerwinski comes back in to replace Florian Jungwirth. Tristan Blackmon has played well enough that the ‘Caps have already extended his contract through 2023, and Ranko Veselinović has been entrusted with marshalling the group from the middle of the three. Thomas Hasal has been fine in goal, and I don’t think he’s in danger of losing his starting spot to newcomer Cody Cropper any time soon.

Looking at the hosts, LAFC are tied for first in the west with an undefeated 2-0-1 start and are coming off a 2-0 road win over Inter Miami. They’ve been a bit fortunate in that their opponents have been shown a red card in both of their last two matches and have taken advantage of that, although one of those ended in a draw.

The big story, of course, is that the ‘Caps are set to face off against former goalie Maxime Crépeau, who left in shocking fashion somewhat late in the offseason. He’s not the only former point of connection either, as Doneil Henry could start in defence and Marc Dos Santos is back on staff in Los Angeles. This is also a homecoming for Blackmon, who made 79 appearances over four years with LAFC.

There are sure to be plenty of hugs and handshakes on the pitch between those listed above and their former teammates, and Whitecaps fans will hope that the shows of love will bookend a stronger performance than the ones we’ve seen so far. It won’t be an easy test (Banc of California stadium never is), but hopefully we’re due some goals.